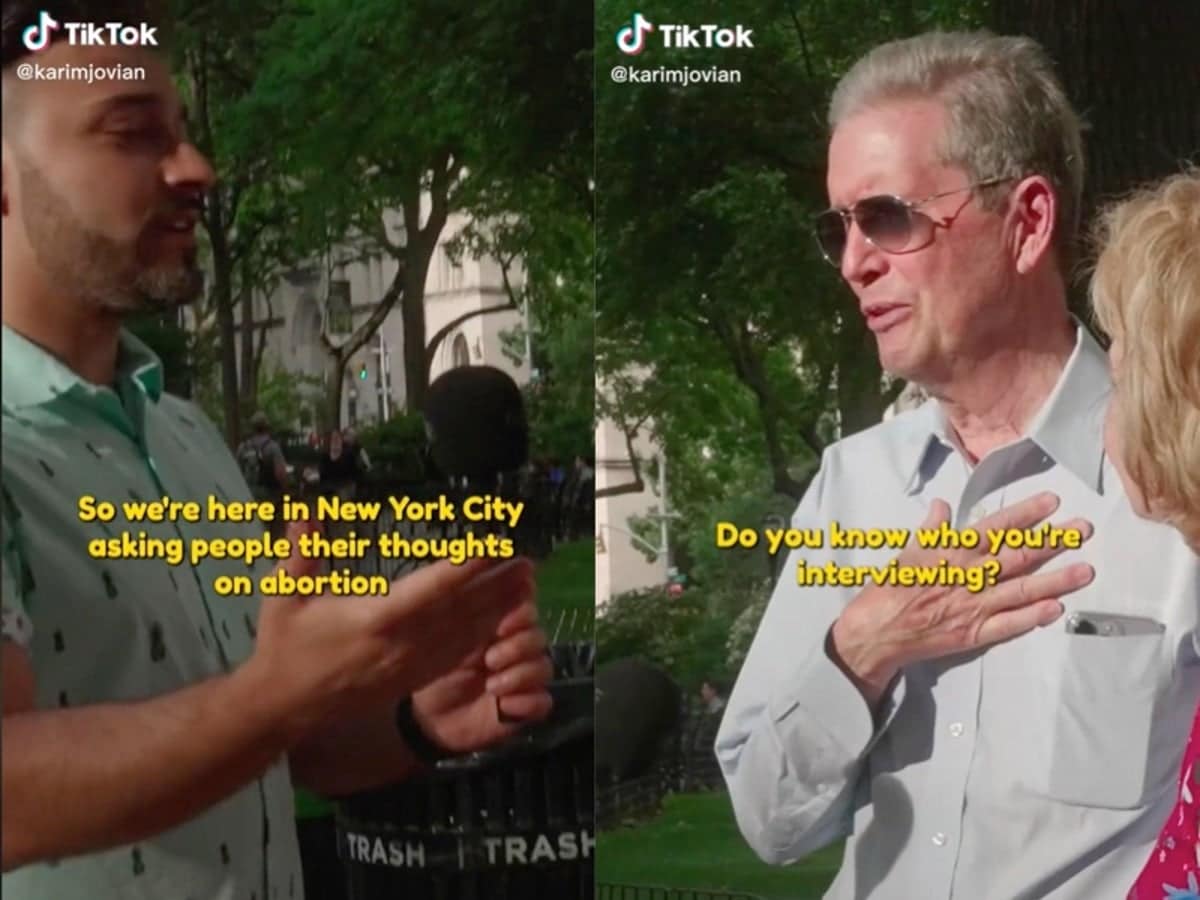 A YouTuber has shared the response he received after he unwittingly asked the grandson of Planned Parenthood founder Margaret Sanger for his thoughts on abortion access prior to the Supreme Court’s ruling to overturn Roe v Wade.

On Thursday, Karim Jovian, a New York City-based filmmaker and influencer who goes by the username @karimjovian on TikTok, filmed himself asking New Yorkers their thoughts on abortion.

In a video posted to TikTok and YouTube, the YouTuber revealed that one of the New Yorkers has approached happened to be Alexander Sanger, who has dedicated his life to continuing his grandmother’s dedication to reproductive rights as both the former chair of the International Planned Parenthood Council and the former president of Planned Parenthood New York.

“So we’re here in New York City asking people their thoughts on abortion since they’re trying to make it illegal. So, what are your thoughts? Jovian began as he approached Sanger and his wife Jeannette Watson. In response, Sanger asked the YouTuber: “Do you know who you are interviewing?”

The question appeared to momentarily stump Jovian, who admitted that he did not before apologizing, at which point Sanger introduced himself.

After Jovian admitted that he hadn’t recognized Sanger, Watson acknowledged the unlikeliness of the YouTuber being able to recognize the reproductive rights activist. “Why would you know that? There was no way you would recognize [him],” she said. “But it’s just funny.”

Watson then admitted to Jovian that, when she was pregnant, she questioned whether she could have an abortion, noting that she concluded it would be a “very difficult thing to do.”

Sanger then weighed in on the topic, telling the influencer “you cannot make abortion go away by criminalizing it, all you do is make it unsafe”.

“You put women at risk. Poor women, women of color, women who don’t have the advantages of middle class, wealthy women to travel somewhere and get an abortion,” Sanger continued. “It’s discriminatory, it’s unfair, it’s unsafe, and, to me, it’s just a total outrage against women.”

The clip of Jovian’s accidental interview with the 74-year-old reproductive rights advocate has since gone viral on TikTok, where it has been viewed more than 11.1m times.

“You really found the perfect person to interview!” one viewer wrote, while another said: “This is amazing.”

The video also prompted many viewers to joke that the interview provided Sanger the perfect opportunity to pose the question: “Do you know who I am?”

One viewer summed up the serendipitous encounter: “Wow. This is outstanding. Talk about chills.”

Sanger later posted the interview on his own Twitter account. On Friday, he also shared a throwback photo of himself advocating for reproductive rights when he was younger. “Been fighting for choice a long time and not stopping now!” he wrote.

Sanger’s grandmother, a nurse, sex educator, and women’s health advocate, opened America’s first birth control clinic in Brownsville, Brooklyn, in 1916. While Planned Parenthood has since denounced its founder’s beliefs in eugenics, the organization acknowledges that it was Margaret’s advocacy that helped begin the movement for reproductive rights in the US and the invention of the birth control pill.

On Friday, the Supreme Court overturned Roe v Wade, thus reversing the constitutional right to abortion under the landmark 1973 ruling and allowing individual states to decide whether to ban abortion.

You can find a list of abortion funds and pro-choice organizations to donate to and support here.