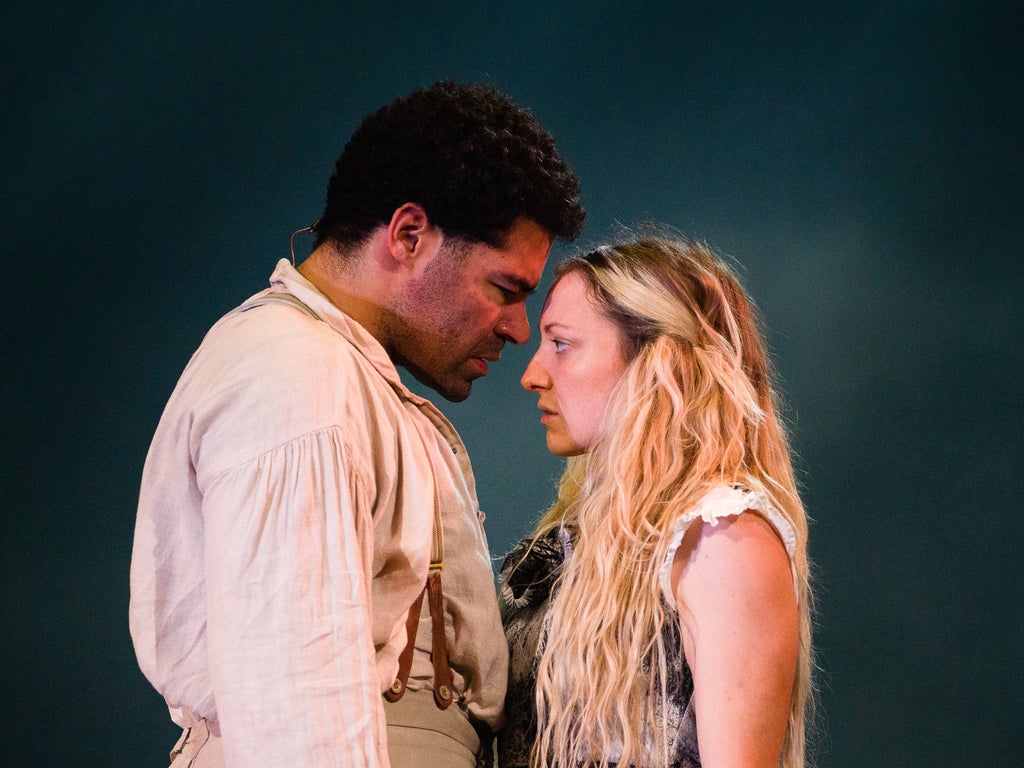 Welcome to the wild and windy moors. Emma Rice’s unwieldy production of Wuthering Heightsnewly transferred to the National Theater from Bristol Old Vic, bursts through the door, blustering and boisterous (and complete with some ropey Yorkshire accents).

It’s a tricky text to adapt: ​​Emily Brontë’s gothic classic has a plot as twisty as a gorse bush, with a number of convoluted family trees for an audience to get their heads around (indeed, Rice makes a point of having the chorus discuss just how confusing it all is). Still, Rice does a fairly remarkable job in making the text as lucid as it is, even if depth of character is sacrificed for breadth of narrative. The majority of the runtime is taken up with Cathy and Heathcliff’s doomed romance: as Cathy, Lucy McCormick, best known for her bonkers performance art, has that requisite wildness in her eyes. Ella’s long blonde hair is matted, she stalks the stage like a vengeful ghost, and she snarls and yowls through a rock solo that lets her virtuosic voice rip through the Lyttelton. Ash Hunter as Heathcliff plays it more straight: Rice seeks to emphasize the way in which Heathcliff is othered by the whiteness of the society around him, and Hunter plays the anti-hero first with fiery rage, and eventually steely cruelty. The pair don’t quite make this strange, turbulent relationship sing, though; their love for one another – the kind of love that defies all logic and reason – is never fully convincing. It’s a shame, too, that McCormick, a performer who has the unique ability to feel properly dangerous and unpredictable onstage, is a little constrained here. Rice sends her into the auditorium at one point, but frustratingly (perhaps due to Covid protocol) has her meekly return to the stage before she can wreak havoc.

In the end, it is the tireless ensemble who anchors the show: Nandi Bhebhe leads the chorus of the moors, who guides the story through Etta Murfitt’s rippling, jig-like dance numbers, accompanied by Ian Ross’s folky music. And Katy Owen, first as Heathcliff’s eventual wife, Isabella Linton, and then as their squeamish son, Little Linton, all but runs away with the show, using her body like a contortionist and bringing a touch of grotesquery to the role (Vicki Mortimer’s costume design shines here too, placing an enormous, gaudy green bow on top of this Little Lord Fauntleroy).

There are pacing issues: the first half is oppressively dense, jam-packed with characters to meet and plot to charge through, and the pace is kept up on Mortimer’s rustic, malleable design. But acute psychological realism has never been Rice’s strong suit, and it really shows here, making the various turbulent relationships harder to care about. Ironically enough, it can all feel a bit airless, and it is telling that the second half, which is shorter and has less plot to cover, feels much more deft.

It’s a chock-full production of Rice’s trademark playfulness and OTT theatricality: the ensemble screech when a door is opened to the windy moors, and the Linton siblings (as fussy Edgar Linton, Sam Archer comes close to matching Owens’ superlative comic gift), in their powder-puff pink costumes and ostentatiously balletic movement, are juxtaposed against the stomping, feral Cathy. The eventual happy ending is tonally (if self-consciously) abrupt too, with Simon Baker’s billowing gray sky projections giving way to a beatific blue. Wuthering Heights is a cumbersome, often tempestuous piece of theatre, no doubt, but there is something oddly fitting about that.