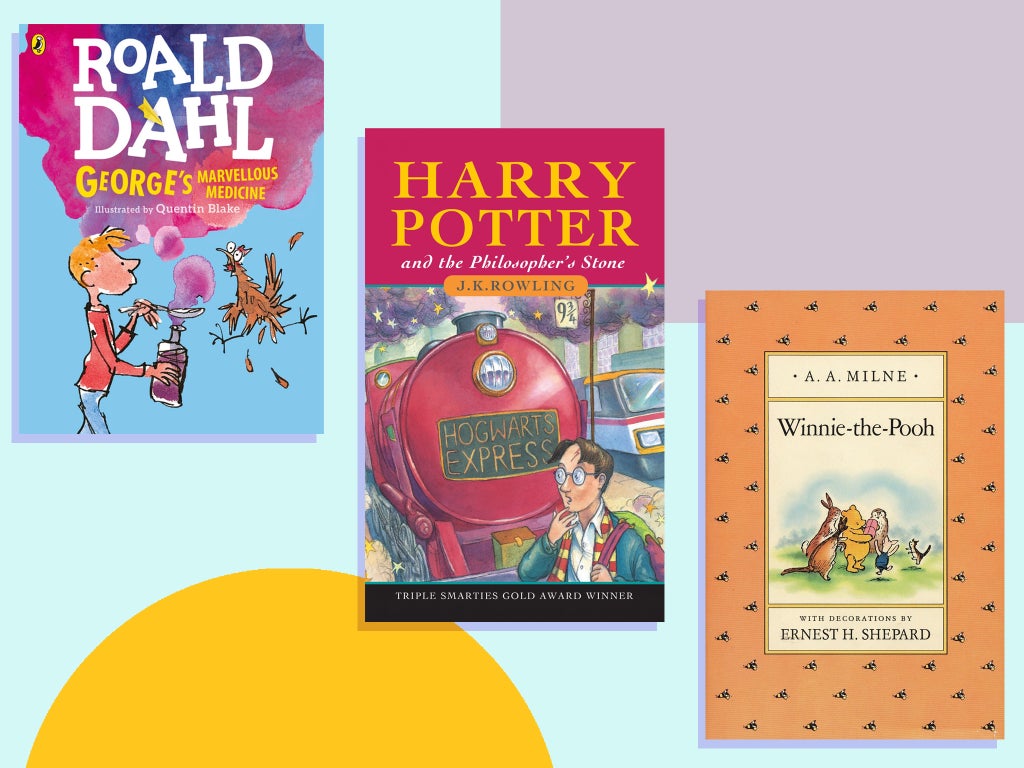 Some of the most formative books that you will read in your lifetime are experienced during childhood, whether they were read out loud by a parent, covertly under the covers at bed time or assigned at school.

But while there are tons of children’s books out there, there are just a select few that continue to hold very special places in our hearts as adults.

With the ability to truly capture their imaginations, finding a book to satisfy your child can be tricky, given there are so many to choose from.

So, with World Book Day upon us, we felt it only apt to celebrate the event’s 25th anniversary by asking the IndyBest team to share some of the much-loved stories that inspired their love of reading as children.

To help you find a book that will encourage your little one, we’ve put together a list of our most memorable reads from childhood. From honey-loving bears to wizarding worlds and the creations of Beatrix Potter and Roald Dahl, each one is a tried and tested recommendation that we believe will be just as cherished by little readers today.

Imagine how exciting Tracey Beaker would have been if Jacqueline Wilson had thrown in some hypnotic powers and you’ll start to grasp the brilliance of the Molly Moon series. The psychedelic silver swirls on the hard copy I was gifted immediately grabbed my attention as a kid, and I’m convinced that my love for pugs in later life was inspired by the protagonist’s four-legged friend, Petula.

The plot follows the mundane-turned-extraordinary life of Molly Moon, an orphan living in England, and her newly acquired hypnotic powers that she enjoys after stumbling across a book on hypnosis at the library. It’s a tale of friendship, mystery and magic (less Harry Pottermore Jumanji) as Molly climbs up the social ladder thanks to her new-found abilities, but faces plenty of moral dilemmas along the way. It’s a wonderful read with plenty of important lessons thrown in.

For a certain generation, nothing can come close to the emotional pull of the Wizarding World, and although the hype of the Noughties can never be recaptured, the stories remain timeless such about the power of love. After experiencing a bout of poor mental health, I reread the series for the first time in a decade. Nothing brought me more comfort than returning to Hogwarts… and finding some accidentally pro-trans rights quotes in the seven volumes, of course. As Dumbledore would say to JK: “You fail to recognize that it matters not what someone is born, but what they grow to be!” Could there be a better message for children of any age on World Book Day?

‘Winnie the Pooh: The complete collection of stories and poems’ by AA Milne, published by HarperCollins: £40, Waterstones.com

Known and loved for his forgetfulness, charming wit and obsession with “hunny”, the complete collection of Winnie the Pooh stories also brings to life all his pals across such such as “The House At Pooh Corner”. From little squeaky Piglet who’s perpetually terrified, to glum Eeyore, forever bouncy Tigger, caring Kanga and little Roo, they’re all based on the teddy collection of the author’s son, Christopher Robin.

As with all the best children’s books, these stories are more complex than they first appear. Each character’s personality traits help children understand emotions, teaching them that it’s okay to feel different ways. Having fought during the First World War, Milne used his stories about him as a way of explaining his post-traumatic stress disorder to his son. Look a little deeper into these tales and there are uplifting and astute lines full of wisdom, such as when Christopher Robin says: “Promise me you’ll always remember: you’re braver than you believe, and stronger than you seem, and smarter. than you think.” Piglet, meanwhile, is very insightful when he attests: “The things that make me different, are the things that make me, me.”

The characters have also been used to explain philosophical ideas, such as in Benjamin Hoff’s books The Tao of Pooh and theThe Tea of ​​Piglet (£9.34, Amazon.co.uk), which explain the principles of Taoism.

Based on the real Ashdown Forest in Sussex – where Milne bought a house as a countryside escape – the fictional One Hundred Acre Wood is where the stories came to life, along with games like Pooh sticks. The stories that were read to me, and which I later loved to read myself, were heartwarming, funny and entertaining – the characters grew to feel like comforting friends.

Lovingly illustrated by EH Shepard, the stories of Pooh and his pals are sure to delight little readers and even younger listeners, as they did me.

When Terry Pratchett’s name starts trending on Twitter, you can rest assured it’s only ever for the most positive and wonderful reasons. Lately, the fantasy author’s philosophy on how expensive it is to be poor formed the backbone of an anti-poverty campaign led by Jack Monroe. That idea came from his brilliant Discworld series of novels, but Pratchett’s many children’s books are packed with similarly intelligent, insightful and compassionate perspectives on the world.

Truckers, Diggers and Wings (also called the Nome Trilogy or The Bromeliad) is about a secret civilization of tiny gnome people whose entire universe is contained within the four walls of a shopping centre. When they learn of the great outdoors it sends their parochial society into chaos, and sets them off on an epic and very silly survival adventure. Notionally about dogma, faith, politics and science, the trilogy of books is mostly just incredibly good fun, and a great entry-point for young readers yet to discover the legendary author.

One for those with a mischievous streak, this Roald Dahl tale is as unique as it is wonderful but should absolutely come with a “do not try at home” warning. First published in 1981, it is one of the author’s shorter children’s books and follows the misadventures of eight-year-old George Kranky who attempts to create a medicine, using a brew of questionable ingredients, that will make his mean and bossy Grandma a nicer person. What’s the worst that could happen? A must-read for children and adults alike, the book, like most of Dahl’s creations, tickles your funny bone while tugging on the heartstrings, and is sure to excite and enthral little minds.

It’s always impressive when a children’s author can take dark issues like abuse, depression and grief and weave them into a book for young readers. Michelle Magorian does this beautifully in Goodnight Mr Tom, telling the story of the timid and lonely William Beech, who is evacuated from London before the start of the Second World War to live with Tom Oakley, a bereaved and embittered widower. I adored this book when my older sister read it to me as a child and I think I probably love it just as much as an adult. Set against the backdrop of war and uncertainty, it’s ultimately a story of kindness and friendship, but with plenty of adventure and excitement thrown in as the reader is taken from the safety of the English countryside to the cruel streets of wartime London. Gripping yet moving, this is a book you’ll love reading to your children as much as they’ll enjoy hearing it.

Lemony Snicket’s A Series of Unfortunate Events is really just as glum as it sounds. The extremely unlucky Baudelaire children are left orphaned after their parents perish in a fire and are carted from hapless guardian to guardian, all the while being chased by a count set on stealing their inheritance. It’s set in a timeless retro Victorian setting, with three unusually intelligent children at its core, who are good at inventing things, reading things and biting things. The literary playfulness on display in A Series of Unfortunate Events arguably kickstarted my obsession with words, making me the bookworm I am today. And just for reference, “bookworm” is a phrase which here means “likely to have my nose stuck in a book during breaktime”, and not a wriggly invertebrate that slithers out of a novel.

Though most youngsters today might know of this naughty little rabbit from his films, I first met him in the pages of a book. First published in 1902, this is perhaps Beatrix Potter’s most famous work and follows a cunning Peter as he sneaks into Mr McGregor’s vegetable garden. After eating all the tasty treats, he must then try and escape with his fluffy tail intact. Children will find it a highly amusing and exciting read, while parents will surely like its not-so-subtle lessons which guide children to do as they’re told. I remember reading this at many a bedtime, as do my parents and grandparents. It’s a timeless classic that has already been passed down for generations, and I don’t see that stopping any time soon.

While other iconic Jacqueline Wilson books – read The Story of Tracy Beaker – will always have a place in this zillennial’s heart, this quartet will always stand out to us. The four-part series follows the lives of three 13-year-old girls (Ellie, Magda and Nadine) as they navigate the trials and tribulations of being teenagers. That means exam stress, new relationships, first love and, of course, heartbreak too. They are funny, frank, agonizingly accurate and, on the whole, light-hearted reads. That being said, parents may want to know that the novels also touch on some more serious subject matters, like eating disorders. This may seem a controversial topic to include in a children’s book, but as with all of Wilson’s writings, it’s handled delicately. Still, youngsters will love getting to grips with these highly relatable and insightful novels.

‘The Lion, The Witch and the Wardrobe’ by CS Lewis, published by HarperCollins: £5.94, Amazon.co.uk

The first installation of the seven-book fantasy series Chronicles of Narnia by CS Lewis, this took captured my imagination when I first read it after watching the 2005 film adaptation. Set during the Second World War, it tells the story of four siblings evacuated from London and relocated to the countryside. There, they stumble upon a magic wardrobe that leads to Narnia – a parallel land inhabited by talking animals and mythical creatures, all ruled by the evil White Witch. It’s a fantastical land that’s rich in wonder, and perfect for a younger reader to lose themselves in.

For the latest discounts on audiobooks, try the link below:

Need some more literary inspiration? Check out our guide to the best children’s books with empowering black characters 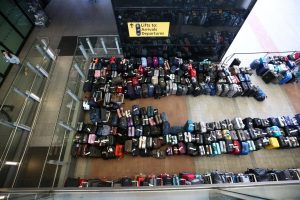