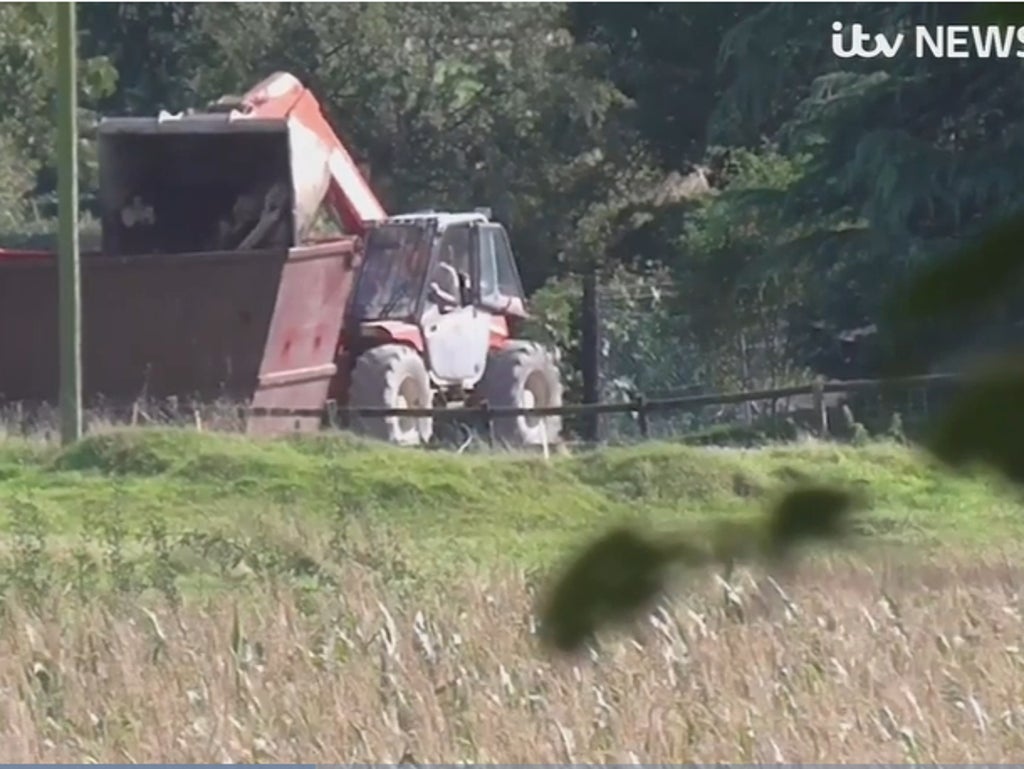 A farm worker bounced up and down on a dead cow and drove back and forth over the carcass of another while animals were stored ready for burning to generate electricity, secret filming has revealed.

Hidden cameras at five sites in England and Wales revealed piles of carcasses at each of them, posing a risk of disease, and satellite image analysis suggested there could be dozens more.

Dead cows, sheep, partridges, ponies, hounds and foxes were piled high in skips, and others were left lying on the ground, according to the filming, commissioned by vegan energy provider Ecotricity and shared with ITV.

Farmers and landowners often pay hunts to take away dead animals such as cows and horses to feed their hounds – as a “fallen stock” service.

Bins overflowing with body parts create a risk of disease such as BSE, according to a former UK government deputy chief vet.

The footage showed magpies, chickens, dogs and crows feeding from the carcasses and body parts.

Alick Simmons, former deputy chief vet, said: “These animals should not have access to these bins. It’s as simple as that.

“What we’re worried about is disease transmitting from farm to farm. The imperative is to make sure that these carcasses are handled carefully and got rid of quickly.

“BSE has not gone – it’s very, very rare, but it’s still there. People who follow basic good practice wouldn’t allow [this] to happen.”

More than four million cows were slaughtered and 178 people died from the human form of mad cow disease when it swept Britain in the 1990s.

The bins full of animals were sent to be processed into meat and bone meal, which was burned to generate electricity, ITV reported. Meat and bone meal is classed as renewable fuel.

Dale Vince, Ecotricity’s founder, said: “Millions of Brits will be shocked and disgusted to discover how hunts are treating their dogs and will be horrified to find out their lights might be puppy-powered.

“Something really shocking was the dumping of partridges that had been shot for fun, dumped in the bin, and used to make electricity.

“Even without the abuse, it’s a surprise to learn that perfectly healthy hunt puppies are killed for not being good enough to join the hunt pack. When one puppy does make the grade and joins the pack, it means the death of an older dog.

“It’s estimated that 6,000 dogs are killed every year in England, for not being good enough to hunt – and their bodies used to make electricity.”

In England, government guidelines on the disposal of “high-risk” animal byproducts say organizations should ensure containers are leak-proof and moved indoors immediately.

Chris Luffingham, director of external affairs at the League Against Cruel Sports, said: “This shocking and dangerous footage is yet another glimpse into the dark underbelly of hunting.

“The foxhunts have been caught showing a shameful disregard for basic biosecurity measures and threaten the very same rural communities they claim to represent.

“And yet some of the UK’s landowners have still not banned hunts from their land. How much more will it take?

The hunts involved told ITV News that they were subject to routine inspections that ensured compliance with the regulations.

The Independent has asked Energy UK, which represents energy providers, to comment.