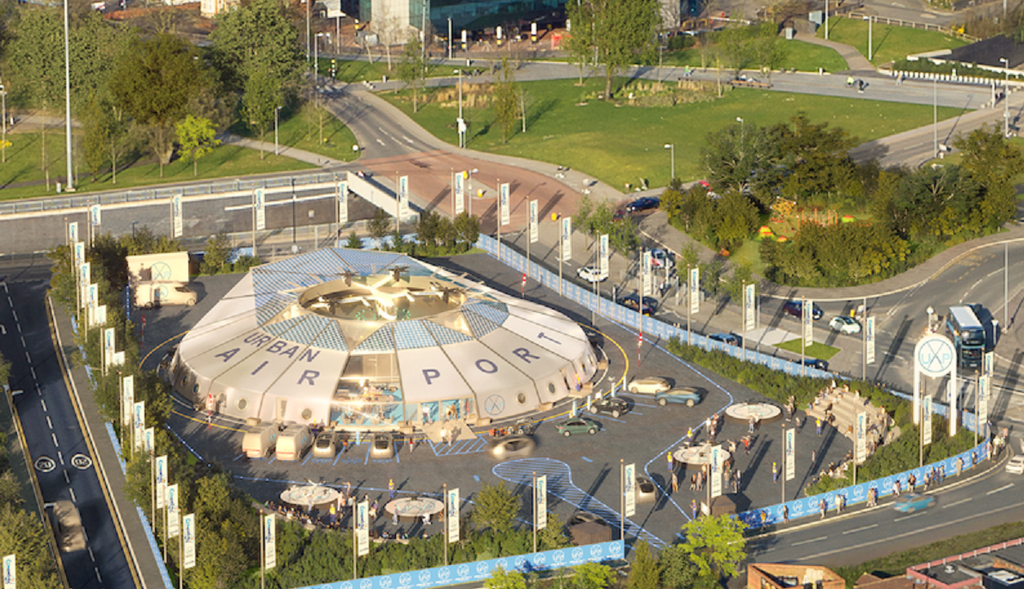 Construction of the world’s first air hub for flying electric cars, police and delivery drones is underway, with a demonstration event planned later this year.

The facility, known as Air One, is being built in Coventry through a partnership involving South Korean car maker Hyundai.

Backers of the mini airport, known as a skyport, have said sites like it will host electric vertical take-off and landing (eVTOL) aircraft, such as air taxis and autonomous delivery drones, transporting people and cargo across cities over coming years.

West Midlands Police have also been in discussions with the company behind the Government-backed project, Urban-Air Port (UAP), about how such hubs could in future provide drone bases for “policing the sky”.

UAP has said the build will be finished ready for an industry launch event running from April 25-27, with public demonstrations planned immediately afterwards.

The police will also be showing their drone operations.

Originally planned to be built next to the Coventry Building Society Arena, the skyport is now being located on a disused car park near the Central Six Retail Park and the city’s railway station.

“We are right at the front of the green industrial revolution and this is a brilliant world first,” he added.

Mr O’Boyle said the “breakthrough system” could lend a productivity boost to UK towns and cities, and aid efforts to tackle climate change by taking vehicles off the roads.

The completed site will include a 46-metre diameter dome-shaped steel frame, with tensile fabric cladding.

The center of the dome will house a platform lift, allowing cargo drones to take off and land – initially for demonstration purposes.

UAP founder and executive chairman Ricky Sandhu, who grew up in Birmingham, said he was “thrilled” building work was starting and said it was “a unique and transformative moment”, which placed the UK “as the world’s leading player in advanced air mobility ”.

“Our technology will enable Coventry and other cities around the country and the world to decarbonise by enabling safe adoption of cleaner mobility solutions,” he added.

Mr Sandhu said it was a privilege to be working with West Midlands Police, who would be showing the site as a “disaster emergency management and security hub for their demonstrations”.

He added: “It is a model we hope to replicate across the country as we enter a net zero age.”

Assistant Chief Constable Mike O’Hara, of West Midlands Police, said: “Urban-Air Port will allow us to explore, showcase and implement what the future holds for policing the sky.”

Developers are planning up to 200 such hubs in cities across the world, within five years of proof of concept.