Mum-of-four Chinyere Ogudoro died after being set on fire by her husband in Lagos, Nigeria. Ella’s husband Benjamin Ogudoro, has been arrested on suspicion of murder

Chinyere Ogudoro moved to Scotland four years ago to study

A mum-of-four has died after being allegedly set on fire by her estranged husband, leaving her heartbroken friends and family wondering “why her.”

Chinyere Ogudoro, 46, and her brother Ifeanyi Edoziem both suffered fatal injuries during an incident at their family home in Lagos, Nigeria.

Sadly, Ms Ogudoro who has been described by friends as a “data enthusiast” died instantly, while her brother managed to escape, before dying in hospital.

Her husband Benjamin Ogudoro, 50, has been arrested on suspicion of murder and is said to have set his wife and brother-in-law on fire as they slept.

In the statement, reported by Nigerian newspaper The Nation, he said: “I went to pick my sister from the Murtala Muhammed International Airport when she returned.

Benjamin Ogudoro, 50, has been arrested on suspicion of murder

“We were sleeping when her husband came late, banging on the door.

“We had a little misunderstanding as he accused me of locking him outside.

“I told him I didn’t bolt the door; that I only used the key lock, and besides, he could have opened it since he had his keys with him.

“He kept shouting that I locked him out. He insulted me and my sister but we kept quiet.

“He left the room only to return when we had fallen asleep.

“I poured petrol on us, lit a match and went out.

“We were burning. I managed to escape but couldn’t save my sister.”

Mrs Ogudoro moved to Scotland four years ago to study at Glasgow Caledonian University and gained a master’s degree in international business management.

She traveled home to Nigeria on Thursday and died at the scene of the incident in the early hours of Friday morning.

Her younger brother died later in hospital but was able to give a dying declaration to police alleging that his brother-in-law was responsible.

Reports in Nigeria say Mrs Ogudoro had returned to speak with her husband after finding out he planned to sell their family home without her permission. Her children of her are believed to still be in Scotland.

Speaking to the BBC, Edna Durueke, a 64-year-old aunt of the victims, said Mr Ogudoro had originally joined his family in Scotland before returning home.

She said: “My niece got a student visa to travel to Scotland. The visa allowed her to take her family so she took her four children and her husband.

“Nobody knows what happened to make the husband decide to return to Nigeria. No one heard my relatives shouting in the house.”

Describing the incident, she said: “Around 4am neighbors realized what happened as they started to smell smoke. No one heard my relatives shouting in the house.”

Mrs Ogudoro had set up home in Glasgow and set up her own management consultancy company in the city after graduating from university.

Friends have paid tribute to Mrs Ogudoro, who worked in banking in Nigeria before moving to Scotland, on social media.

Chime Chimezie-uche wrote: “It’s still a shock that you are gone. You cared so much for your children. Your death is painful Chinyere. Rest in Peace.”

Odunayo Ogunsanwo posted: “Spoke with her two days before she went to Nigeria. She was a data enthusiast that did all to learn more and earn a new legacy.

“Why Chinyere Ogudoro of all people?”

Dr Colin Combe, of the Department of Business Management at Glasgow Caledonian University, said: “I am very shocked and saddened to hear of the tragic death of Chinyere.

“I was able to get to know Chinyere well and admired her dedication to her studies and the welfare of her children and wider family.

“Her motivation for undertaking the course was to enable a better future for them. Chinyere will be missed by all who knew her and I send my heartfelt condolences to her family and friends.”

See also  The 400 complaints and two sentences that corner Lupine, the biggest cyber-fraudster in Spain | Madrid 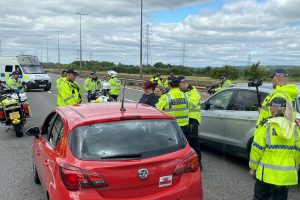