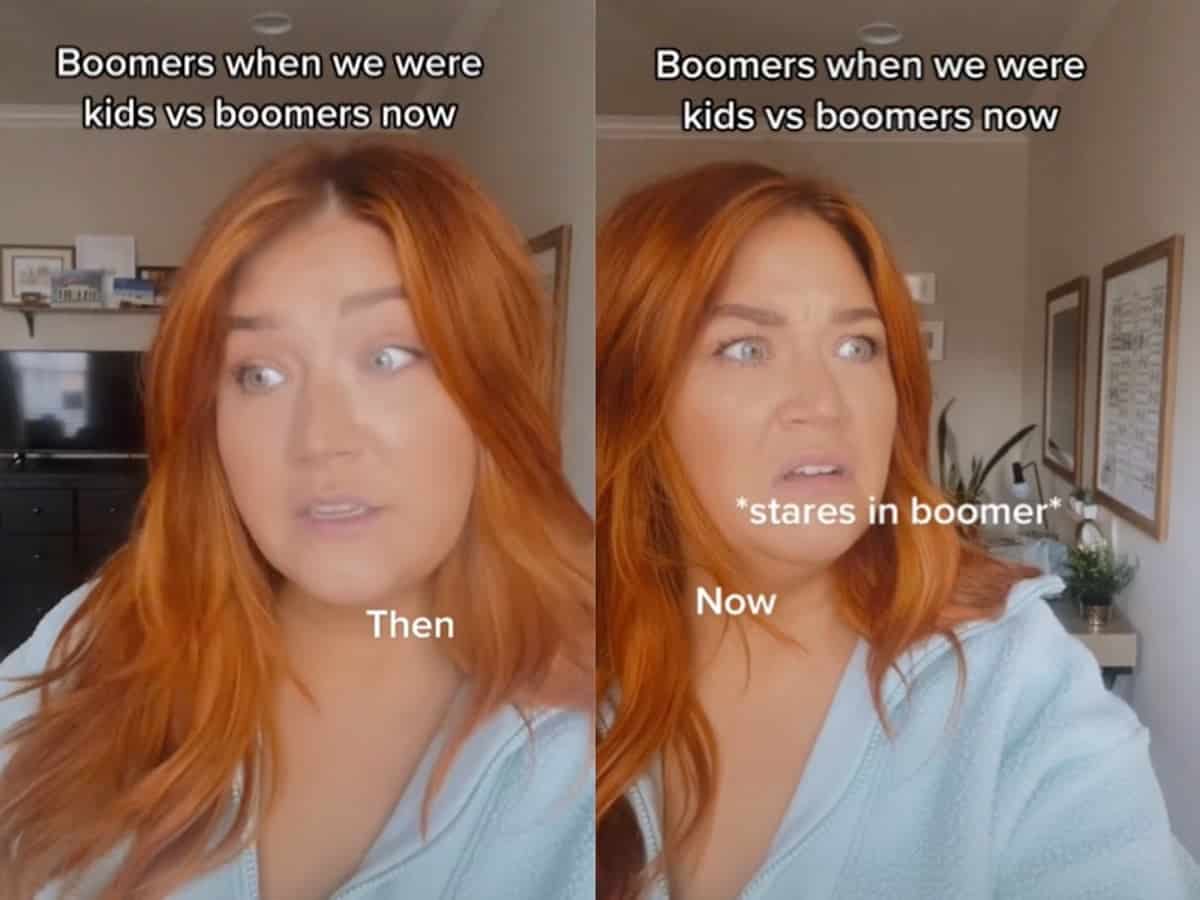 Baby boomers, Millennials, Gen Z: As the generation war continues to wage on, younger people are calling out boomers for their “selfish” change in attitude.

A woman has gone viral on TikTok after she shared a video in which she showed some of the contradicting behaviors of the baby boomer generation, from when they were parents raising millennials compared to today.

The video, which was posted by TikToker Jocelyn Wheeler last March but has since gotten renewed attention in recent weeks, has received more than 578,000 views on the platform. In the clip, the hairstylist and mother of four acted out some of the statements she heard come from baby boomers when she was a child. Now, it seems that the boomer generation is doing the complete opposite of what they’ve taught their children to do.

“If you can’t say something nice don’t say anything at all,” she began the video, compared to what she claims boomers are saying now.

In one scene pretending to be a boomer, she said, “What do we say? Please and thank you. Good job. We use our manners in this house.”

Growing up, Wheeler says boomer generation parents would say: “You better clean that plate, I want to see happy plates, you eat every bite. There are starving kids in Africa.”

Although now, she finds them saying: “You’re gonna eat all of that. All of it? Golly. Well, dang, we could’ve split that. There’s so much food on that plate. Mercy!”

In another scene, Wheeler said, “Stop it, don’t stare. Just because they’re different we don’t stare at them.”

She compared this to now, in which Wheeler simply wrote: “Stars in boomer.”

Finally, she said, “We got married when we were 18 and we’re just so happy.” Now, it’s more like: “If I have to listen to him snore one more night, I’m gonna smother him with a pillow.”

The term “baby boomers” refers to the drastic rise in birth rates following the end of World War II, which was described as a “boom” by American writer Sylvia Porter in a 1951 column of the new york post.

According to the Pew Research Center, individuals born within the years 1946 and 1964 fall under the baby boomer generation.

In recent years, the baby boomers have received considerable flack on and offline after Millennials and Gen Z-ers began using the phrase “OK, boomer” as a way to dismiss baby boomers’ criticisms that the younger generations are entitled or that they can’ t afford to buy a house because they’re paying for a Netflix subscription instead.

Wheeler’s viral video received thousands of comments from fellow TikTokers who agreed that the boomer generation has “reverted back to children in their old age,” according to one user.

“This is the MOST accurate thing I’ve seen,” one person said.

“They want to BE respected – not respectful,” said another TikToker user.

“Because they only cared about how we treated them,” said someone else. “Nothing and no one else matters.”

Another TikToker wrote: “They’re definitely the ME generation. Never met a more selfish group of people.”

One person asked why baby boomers are “self-centered narcissists,” and it seems there may be an explanation.

A 2019 study on narcissism, which was published in the journal Psychology and Ageing, found that baby boomers are actually more sensitive than millennials. Researchers at Michigan State University analyzed a sample of nearly 750 people between the ages of 13 and 77, and found that qualities associated with narcissism – such as being full of yourself, being sensitive to criticism, and imposing your opinion on others – decline “over time and with age”. However, narcissism levels varied by generational groups, with older generations found to be more sensitive overall.

Meanwhile, millennials were found to start out with a lower degree of hypersensitivity than their older counterparts.

Wheeler’s TikTok received so much attention that she followed it up with another “Boomers Then vs Now” video. The second part of the series, which she posted on 12 May, showed similar contradictions from boomers when young adults were growing up compared to what she claims the baby boomer generation acts like now.

In one example of Wheeler pretending to be a boomer, she said: “Well, maybe if you hurt her feelings then you tell her you’re sorry. You have to apologize.”

Now, she finds boomers saying: “What? I hurt her feelings from her? Well, she can kiss my—”

“It’s scary how accurate this is,” one TikToker commented, while another person wrote: “Do we all have the same parents?”