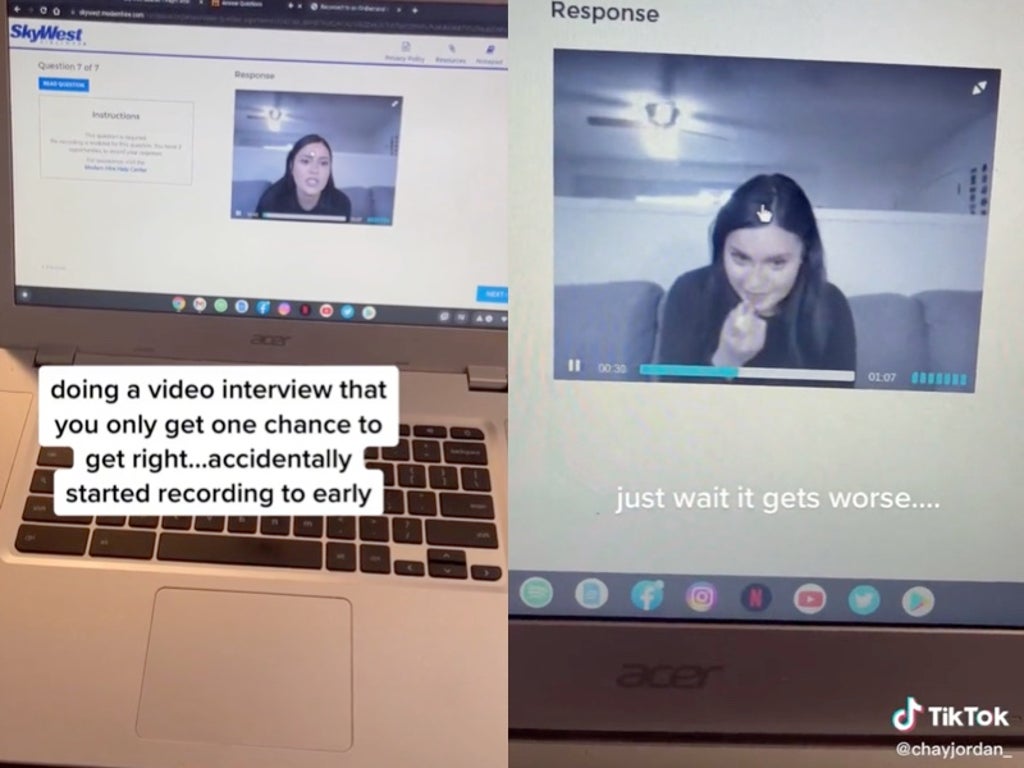 A woman has shared the “painful” job interview response she accidentally submitted to SkyWest Airlines for a flight attendant position after failing to realize that she was already recording her answer.

Chaylene Martinez, who goes by the username @chayjordan_ on TikTok, uploaded a video of her practicing her response to the interview question, and the moment she realized it was already recording, last month.

In a text caption on the clip, Martinez explained: “Doing a video interview that you only get one chance to get right… accidentally started recording too early.”

Martinez then played back the answer she submitted, which saw her reading the prompt: “What is your impression of SkyWest company culture and how does that resonate with you?” which she then described as the “stupidest, cheesiest question I’ve ever read in my life”.

The TikToker, who appeared to be on the phone, then told the person she was speaking with that, at work, they had been discussing mission statements, and that she planned to incorporate it into her answer.

“But I just can’t, like, word this properly,” Martinez said. “And you have to record yourself saying it so it’s so awkward…”

After pausing to apply lip gloss, Martinez tells the person she’s speaking with that she plans to say: “My impression of SkyWest culture is based off the mission statement that you guys have… wait… hold on…”

However, after noting that she was going to keep practicing, Martinez then captured the moment she gasped and realized that her response was already recording.

“Oh no,” Martinez can be heard saying, before smiling and telling the camera: “I’m so sorry, I didn’t realize it was recording, I was practicing.” She added: “So, I was going to say…sorry,” before abruptly ending the recording.

In the caption, Martinez joked that she was “def not getting the job,” before reiterating to SkyWest that she was sorry.

The video has since been viewed more than 5.5m times on TikTok, where viewers have shared their horror over the incident, while others have said that Martinez deserves the job.

“OH MY GOD THIS WAS PAINFUL. You are so brave,” one person commented.

Another said: “I really hope they hire you. This is so funny.”

“Strengths: honesty,” someone else joked.

In response to the video, a woman claiming to work for SkyWest revealed that the interview had circulated around the company, and that employees found the amusing clip.

“I work for SkyWest and this made its way to the SkyWest Facebook page and let me just tell you every comment is all of us saying ‘PLEASE hire her’ Lmfao,” they wrote, while another user who claimed to work for the company also shared a similar comment, writing: “I hope you know all of us at SkyWest are talking about this in our fb group and we love you, hope you get hired!!

Despite the support, Martinez revealed in her TikTok bio that she did not get the job.

“No I didn’t get the job, someone hire me,” she wrote, before sharing her email.

The Independent has contacted Martinez and SkyWest for comment.