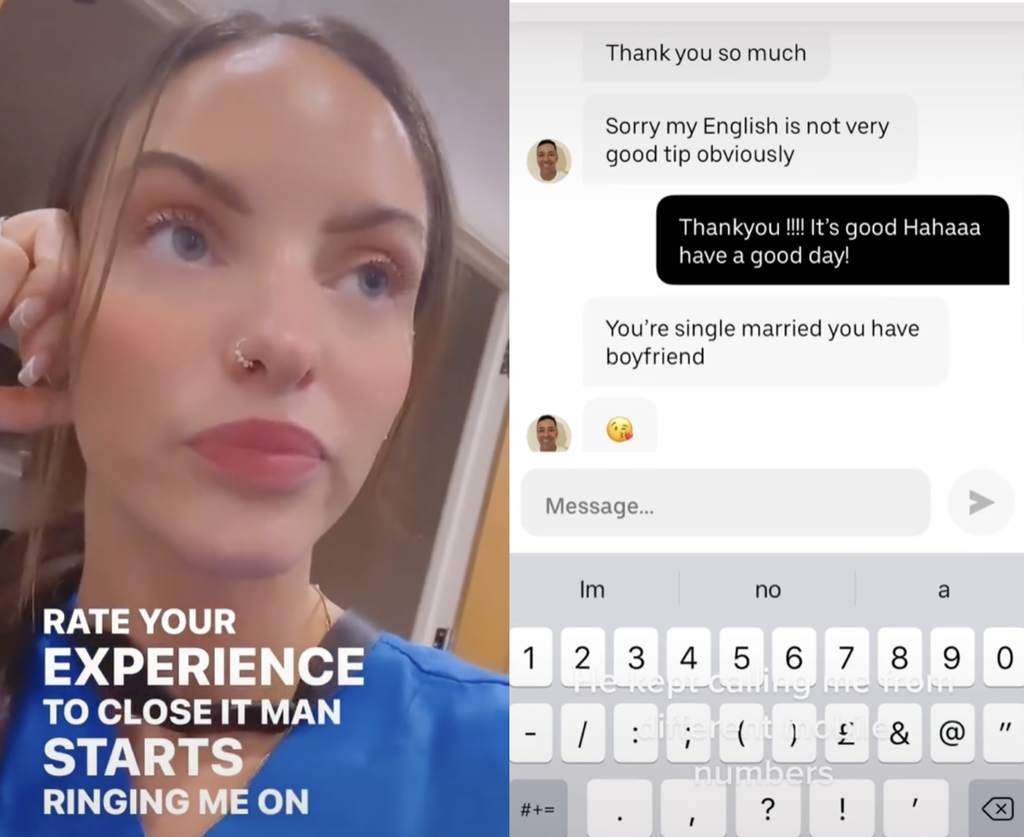 A woman has revealed how her UberEats driver harassed her, as he continued to linger outside of her apartment and attempted to call her multiple times, after already delivering her food.

In a recent video posted to TikTok, Justine, @justinejhxo, detailed how after she finished a 12 and a half-hour shift at work, she ordered food from McDonald’s via UberEats. And once her driver already delivered her food, he still tried to talk to her.

“He starts talking too much, so I was like ‘I need to go to sleep, I’m going back in. Bye, thank you so much,’” Justine recalled.

After he left, he continued to message Justine on the UberEats apps, which left her “speechless.”

“I could just scream,” Justine added.

She then showed some of the messages he sent to her, where he kept asking her if she was single or not. He also asked her “how long she had a boyfriend.” And this wasn’t the only way that he tried to contact Justine.

“He kept calling me from different mobile numbers,” she explained. “And he was lingering outside my flat, and I live on my own.”

She noted that when she went to rate her experience on the UberEats app, that was when the driver started calling her.

“Man starts ringing me on my mobile,” she added. “Not only does this man have my mobile number now, he has my address from him. Now I’m tired.”

The video has over 1.5m views so far, with TikTok users in the comments encouraging her to tell UberEats about this experience.

See also  a podium scientist in the field of nanotechnology

“Hope you’re ok, love,” one wrote. “You can report this to uber and he will be banned.”

“He should not be retaining your contact info,” another wrote. “I hope you’re okay and that I’ve got reported. It’s not on.”

Multiple viewers tagged UberEats in the comments, expressing how they should be more careful when hiring drivers.

“@Uber Eats This is what happens when you hire just anyone,” a comment reads. “There is a rise in your drivers and delivery guys doing this. It’s becoming a trend!”

Some women also said that they’ve gone through similar experiences of harassment, as well.

“I got a delivery driver sacked for something like this, he kept asking me out on a date and tried to stop me [from] shutting the door,” one TikTok user explained.

“I had a food delivery driver visit me the next day to ‘check [if] I was ok,’” another added. “I don’t order takeout when I’m alone anymore.”

In a follow up video, Justine said that she reported the driver to UberEats, who apologized to her and said they’d be in contact with the driver. She also chose not to speak with the police about this.

“I’m probably just going to delete the app, to be honest,” she said, in regard to UberEats. “On a serious note, judging by the comments, this has happened to a lot of women, which isn’t OK.”

speaking to The Independent about the driver, a spokesperson from UberEats said: “What has been reported is totally unacceptable and we are currently investigating this incident. Couriers found to have behaved in this way face permanent removal from the app.”

To The Independent, Justine said that she’s yet to have heard back from Uber Eats since she reported the driver. She also reiterated how she’s going to delete the app. “It left me a really unpleasant experience, and it just doesn’t feel safe when I’m on my own,” she explained. “Maybe when I have friends over, I’ll order again.”

In regards to seeing some of the comments from other TikTok users on her video, she said: “It’s actually quite alarming and sad how many women have had similar experiences. It’s a shame. I’m not surprised that it happened though because things like that happen all the time.”

She also addressed how she has screenshots from the two numbers that have called her and she’s blocked them. However, the fact that he still has her address and her name makes her feel quite uneasy.

“It’s just left me feeling really fed up and a bit stressed,” she added.