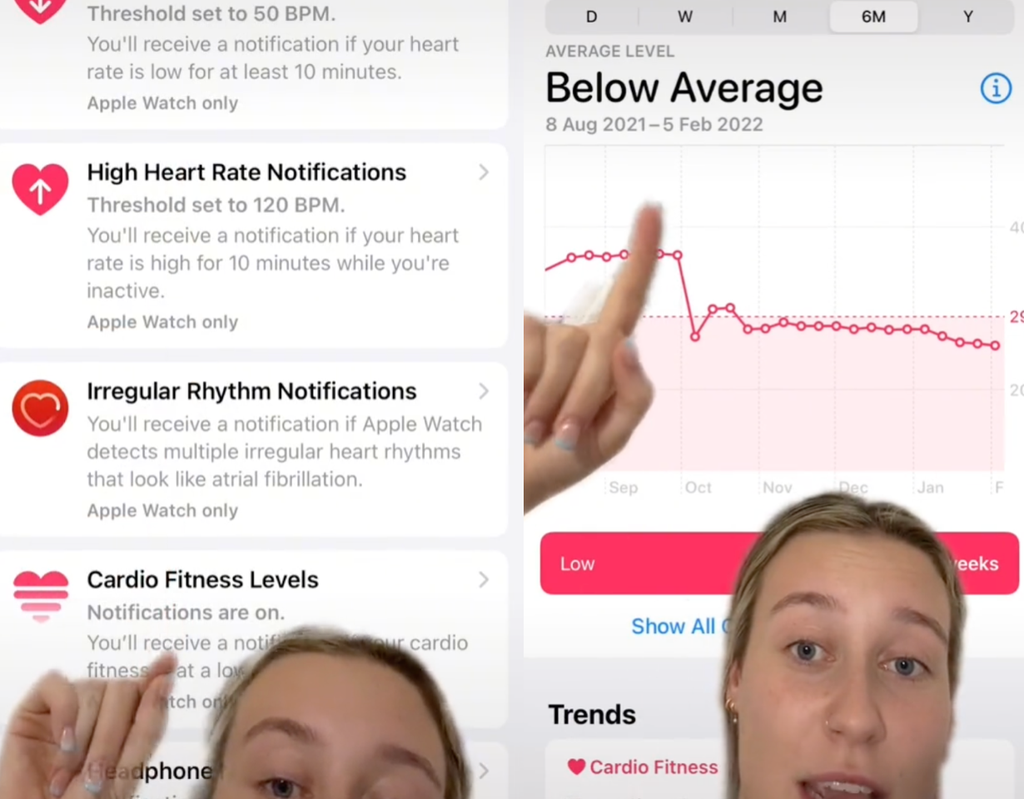 A woman has revealed how a feature on her Apple Watch could have helped her detect her thyroid condition months before she was diagnosed.

In a TikTok video posted on 2 February, Lauren, who goes by @studyvlogloz, explained some of the key features on Apple Watches that have helped her keep her health in check. She then urged her followers who have Apple Watches to turn on notifications for “low heart rate, high heart rate, irregular rhythm, and cardio fitness levels,” as she noted that, if she had done so, she would have learned about her own condition earlier.

After encouraging others to turn on the notifications, Lauren, a nursing student in Sydney, Australia, shared her regret that she hadn’t had her own notifications on, as she explained: “A couple of weeks ago, I got diagnosed with a thyroid condition…But I would have realized something was going on if my Apple alerted me of changes.

“Instead of me waiting for the symptoms to get really bad, I could have gone to the doctor back in October, when there was this dramatic drop in a matter of days.”

The drop Lauren was referring to was displayed on a graph, which showed a decrease in her oxygen consumption in October. The levels continued to go down as the months progressed.

“It dramatically dropped, which means my cardiovascular system isn’t working as well as it once was,” she explained.

She noted that the timing correlated with the start of her symptoms including “fatigue,” “irregular heart rate,” “serious sensitivity to heat,” “weight gain,” “dry skin,” and “irritability.”

Lauren concluded the video reiterating that, while an Apple Watch isn’t what she turns to for health and medical tips, it can still be quite helpful.

“Don’t get me wrong, your Apple Watch is definitely not something you should follow as medical advice,” she said. “But it can come in handy, I guess, as a tool to prompt you to go get things investigated further.”

The TikTok video has more than 351,000 views so far, with viewers in the comments agreeing with Lauren and noting how much they trust their Apple Watches.

“My Apple Watch is my life-saver as someone with a heart condition,” one viewer wrote. “Literally monitors my heart all day and gives me peace of mind.”

“My Apple Watch helped me with getting diagnosed bc my doctors just weren’t taking me seriously,” another TikTok user said.

Other viewers emphasized how having this data from their Apple Watch ended up benefiting them in the long run.

“Yes so important!” one wrote. “It is such a great thing to have the chart showing your constant HR too! Especially if your HR goes up at the doctor’s appt. I started a new med and it was so good to show my doctor!”

In a video posted on her TikTok this past December, Lauren explained that she was diagnosed with thyroid hemiagenesis, which she is being treated for.

As noted by the World Journal of Surgical Oncology, thyroid hemiagenesis (TH) is a rare disease where there’s an “absence of a thyroid lobe.” Most patients usually do not have any clinical symptoms of it. With a more common thyroid condition, like Hashimoto’s thyroiditis, some of the symptoms include fatigue, dry skin, and muscle weakness, according to the Mayo Clinic.

speaking to The Independent, Lauren emphasized how beneficial her Apple watch has been for her well-being. “It’s essentially kept a logbook of when everything went downhill for me,” she said. “That and my Snapchat saved photos – when I compare them both together, there’s a very clear timeline of when my symptoms started and how they’ve affected my health.”

“As an aspiring medical student and current nursing student I’m very cautious that the abundant access to technology can catastrophise symptoms into making people assume the worst,” she added. “But on this occasion, I really wish that I had all the settings toggled on and noticed the changes and gone to the doctor sooner.”