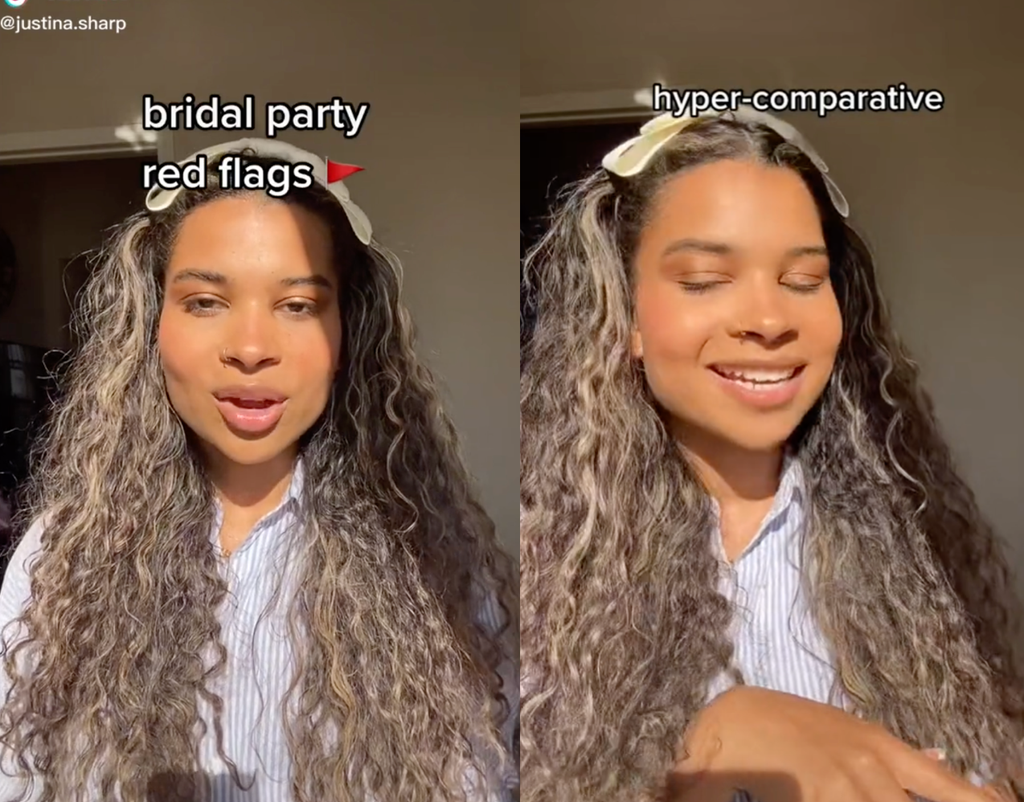 A bride-to-be has revealed what she thinks is the biggest ‘red flags’ when it comes to a bridal party, and her viewers are coming to her defence.

In a TikTok video posted on January 21, @justina.sharp, Justina, shared a list of “bridal party red flags”, as she reenacted various behaviors that could appear in bridesmaids and be an issue.

“If someone in your bridal party is exhibiting these behaviors, you might have to kick them to the curb,” Justina said.

She starts the series by acting like a bridesmaid who is being “hyper-comparative,” as they keep bringing up her own wedding.

The next red flag is someone who is “disdainful or mocking,” especially towards the bride, and would say things like: “I don’t think that’s a really good shape for you, do you?”

Another problematic trait in bridesmaids, according to Justina, is when they are “unreachable and uninvolved”.

The final red flag on this list is a “joy thief”, someone who is downplaying the excitement of a wedding.

“It’s just a wedding, everyone has one,” Justina said, reenacting this type of bridesmaid.

This video has over 127,200 views, so far, with many TikTok users supporting these red flags in the comments.

“The last one,” a viewer wrote. “Just people in general. I understand it is just ‘one day’ of many but it’s an expensive one and I want everything to go smoothly”.

“WAVE THE RED FLAG AND DROP THEM,” another comment reads.

Many TikTok users also shared their own experiences with their bridesmaids in the comments, acknowledging how some of them behaved in the manners that Justina described.

“Kicked my sister out for being unavailable & had a ‘joy thief’ day of,” one wrote. “Also beware of those that don’t value your time – another had us running behind.”

“One of my long-time friends ended up being this kind of bridesmaid,” a viewer commented. “Ella Made everything about her, refused to wear makeup for the wedding, complained about how the pool at the Airbnb was n’t good enough for my bachelorette party.”

In a follow-up video, Justina shared even more “bridal party red flags”. And at the start of the clip, she once again emphasized that if bridal party members are “exhibiting these behaviours” they should no longer be a part of the wedding.

The first inappropriate habit included being “jealous” and making that very clear to the bride. This could be done by saying things like: “Getting married doesn’t make you better than anyone else”.

The next annoying manner is being “self-involved”, especially when it comes to planning.

“Oh, that’s the day you want to have the wedding? I usually have pilates on Saturdays,” Justina said, pretending to be this kind of bridesmaid.

The third behavior is someone who’s a “solo operator”, as they tend to ignore certain time frames for the sake of their own schedule. For example, they may be asked to show up to an event at 9am, but won’t because they’re “not a morning person”, so they agree to arrive at 1pm.

The last red flag is someone who says that they’re “one of the boys”.

“I’m not really into all this girl stuff,” Justina said, as this character. “I’m more of a guys girl.”

speaking to The Independent, Justina noted that these red flags can be applied to a bride, bridesmaid, or any person in life. “I compiled the specific red flags used in the video through my own observations in personal relationships, stories I’ve been told by other brides, and of course, romcoms,” she said.

She also acknowledged that even though a lot of humor can be taken from these videos, there’s still something to learn from them.

“Every time one of my videos goes viral it means at least one IMPORTANT conversation is being had, and that’s incredible because it’s a joke – but not really,” she explained. “Right now, my content is wedding centric because I’m getting married, but really these videos are about boundaries, relationships, and how to fill your life with people who you love and who bring you joy, which is something I think everyone wants . I also love the idea that my videos are a launching point for people to stand up for themselves, a lot of the comments I get are from brides who just needed someone else to verbalize or validate how they were feeling in order to act. I’m always here to be that friend for them.”