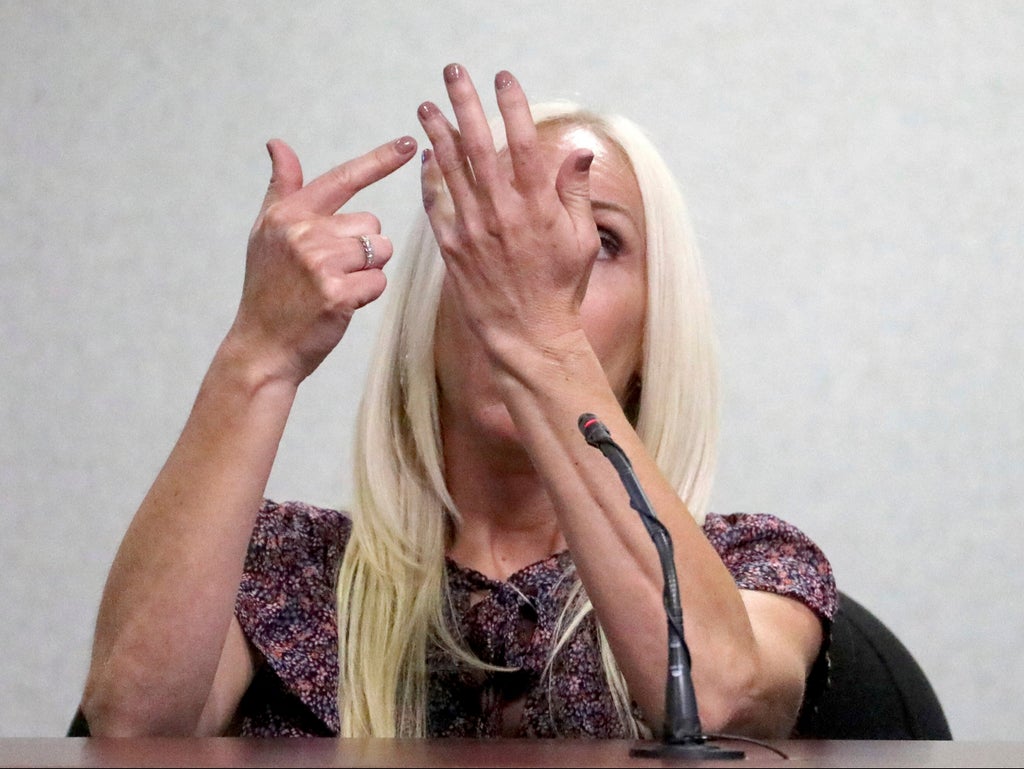 A women who watched her husband die after a retired police officer allegedly shot him at a movie theater near Tampa recounted her experience during court testimony.

On Monday, Nicole Oulson, the wife of Chad Oulson, 43, recalled the events leading up to her husband’s death in 2014 during the opening day of testimony in the murder trial of Curtis Reeves.

“I see his eyes were just glazed over and I knew at that moment,” she said. “I told him, ‘Chad, we need you, please hang in there, we need you.'”

Mr Reeves, 79, is a retired police captain who has been charged with second-degree murder and aggravated assault with a deadly weapon. He faces a possible life sentence if convicted.

The incident reportedly began over an argument about Mr Oulson’s phone us in the movie theatre. Ms Oulson testified that the men were bickering because Mr Oulson was using his phone during the trailers preceding the film lone survivor. Prosecutors claim he was checking in on the couple’s daughter, who was in daycare at the time.

Mr Reeves allegedly demanded that Mr Oulson stop using his phone, to which Mr Oulson responded with profanity, though Ms Oulson said she does not remember him using any objectionable language.

The annoyed Mr Reeves reportedly went to the theatre’s management to report Mr Oulson, and returned to his seat. The conflict escalated, and Mr Oulson reportedly threw a bag of popcorn at Mr Reeves. The men stood up, and Mr Reeves then allegedly pulled out his pistol and shot Mr Oulson. The bullet that killed Mr Oulson also hit his wife in his hand, leaving it badly damaged.

Mr Reeves has claimed self-defence, saying he feared for his life and shot Mr Oulson as a result. The defense has argued that Mr Reeves feared that the younger man would assault him.

“It may not be what I would have done or what you would have done, but you have to realize how Mr. Reeves was at that time,” Richard Escobar, the defense attorney representing Mr Reeves, told the Tampa Bay Times. “He was 71, in declining health and a decorated officer. He had all that body of knowledge to determine whether he was in a predicament that could have led to him being harmed. At that moment, his perception of him was that he was in serious danger.

Prosecutors dismissed the idea that throwing a bag of popcorn justified lethal action.

“What the evidence will show you is that Chad Oulson was shot and killed over tossing popcorn,” Assistant State Attorney Scott Rosenwasser told jurors. “That’s no reason to kill another person”‘

Mr Reeves’ background in law enforcement is being leveraged by both the defense and the prosecutors in their arguments.

The defense is arguing that his 27 years of experience as a police officer taught him how to recognize a dangerous situation. However, the defense argued that it was his nearly three decades of law enforcement experience that should have provided him the ability to stay calm in a tense situation, noting that officers are trained in deescalation techniques.

“The claim that he was standing on his ground is asinine, to say the least,” Attorney TJ Grimaldi, representing Ms Oulson, said. “Is there ever a good reason to shoot someone for popcorn being thrown in their face?”

Dozens of witnesses have been listed but it is unclear how many will ultimately testify in the case.