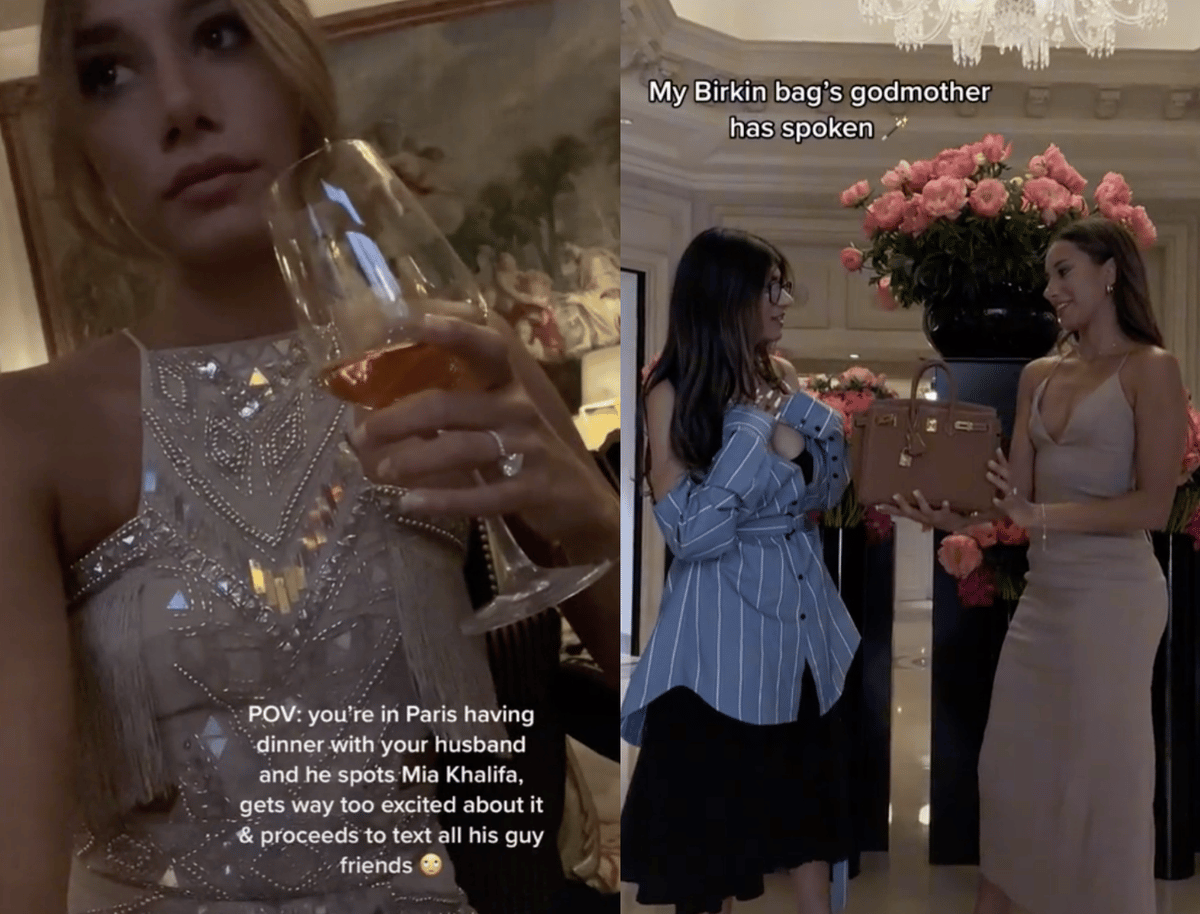 A woman shared how she received a Birkin bag from her husband as an apology after he got “too excited” when he saw adult film star Mia Khalifa.

In a video posted to TikTok last month, Lya — who goes by @lyamariella on the platform — explained that while she was out to dinner with her husband, Nickolaus, he apparently saw Khalifa and started contacting all of his friends about it.

“POV: you’re in Paris having dinner with your husband and he spots Mia Khalifa, gets way too excited about it and proceeds to text all his guy friends,” the text over the video wrote.

Lya could be seen in front of the camera, sipping on her glass of wine.

In the caption, she noted that she wasn’t pleased with her husband: “Not okay,” along with the hashtags, #honeymoondiaries #husbandthings #trouble.

As of 6 July, the clip had more than 4.3m views, with TikTok users in the comments sympathizing with Lya and arguing that Khalifa would likely have been more interested in speaking with Lya than Nickolas.

“I promise you she would’ve ignored your husband and talked to you lmao,” one commenter wrote.

“To be fair, Mia would probably be really upset to hear you were treated that way,” another wrote.

A third person added: “That is so disrespectful to you, especially when you’re in Paris looking that beautiful.”

Other viewers emphasized that if they were in Lya’s shoes, they too would have been upset at Nickolas.

“I would have immediately started pointing out hot guys,” one wrote, while another said: “I would have simply…left.”

In a now-deleted comment on the TikTok video, shared via BuzzFeed, Khalifa confirmed that she was in Paris at dinner with her partner and even joked: “Girl, my man was on his phone the whole time, I say we throw them all away and go shopping tomorrow.”

The former webcam model also left another comment on the video saying that Lya’s husband “owe[d] [her] to birkin”.

In a follow-up video, Lya apparently revealed that her husband did buy her a Birkin bag, in order to apologize for how he acted when he saw Khalifa at dinner.

The clip, which was tagged Khalifa, showed Lya holding up the bag alongside the caption: “Just over here trying to make you proud.”

In another video posted to TikTok, Lya also shared that she did eventually meet Khalifa, who was now the “Birkin bag’s godmother”. The pair could be seen laughing in front of the camera, while Lya noted in the caption that she “couldn’t have” gotten the bag without the former adult actor.

“I’m here at the christening of the baby Birkin,” Khalifa said, as Lya held her bag. “We’re not going to dump it in water, ’cause who would do that to a Birkin. Also, her husband that we were talking s*** about is the one filming this right now.”

Lya proceeded to laugh, before she chimed in and said: “What a time to be alive.”

The TikTok user continued to make jokes about the situation and later even posted a different video with Nickolas and Khalifa.

“When you’re about to cuss him out for recognizing Mia Khalifa, but he hits you with the one reverse: Birkin edition,” the text above the clip reads. Lya and Khalifa could be seen playfully arguing with Nickolas, before he handed his wife her bag from her.

Lya also praised the pair in the caption, as she wrote: “God bless them both @miakhalifa & my hubs.”

During an interview with Buzzfeed, Lya clarified that when she made her first video, she was only teasing her husband and wasn’t really mad at him. However, she still thought it was amusing to see how people reacted to his behavior in the comments of the video.

“It was funny to hear them say they would have been as ‘excited’ as Nicky and texted all their friends had they been in his shoes,” she said.

Of Khalifa, Lya acknowledged just how kind she is and how much she enjoyed spending time with her.

“I want to corroborate all the nice things people say about her,” she added. “She was not just sweet and easygoing but she had depth and character, too. We both felt like we made a friend that day.”