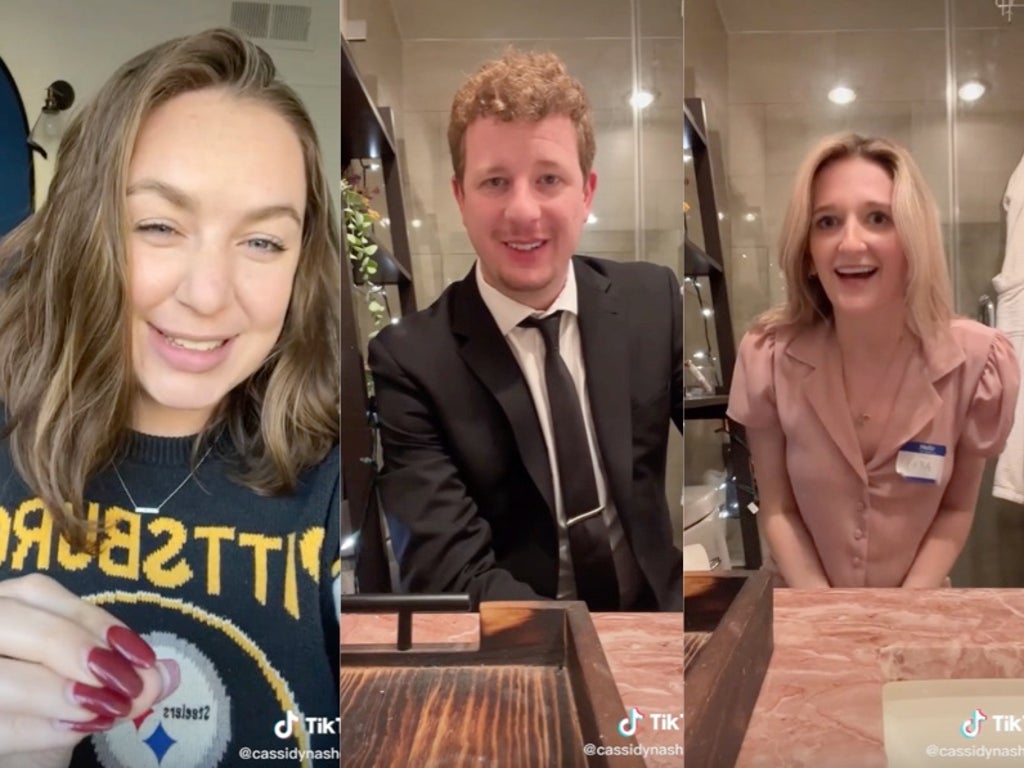 Some people don’t like being single on Valentine’s Day. Thankfully, this woman didn’t have to be. Instead, she enlisted guests from the internet to attend her “chaotic” Valentine’s Day party.

TikToker Cassidy Davis first pitched her party idea in a video posted on 20 January that now has over 290,000 views. The thought came to her when she was trying to think of something fun to do for Valentine’s Day weekend with her single girlfriends.

“The party is called, ‘Bring a random and bring a bottle,’” she told her followers. Then she laid out the rules. “Number one: you have to bring a random person that you matched with on a dating app,” Davis said. “Ideally, you haven’t gone on a date with them yet,” she added, so that the party is “maximum chaos”.

“The second rule is that you have to bring a bottle of alcohol to drink because we’re going to need that,” she said. Once you have your date and a drink, then you show up to a friend’s house and play drinking games all night. Do not worry, this TikToker also included in her plan for a potential stranger-danger situation. “If someone is a murderer and murder happens, it’s a real life murder mystery party,” Davis joked.

Fans loved the idea, and begged to see how the Valentine’s Day party turns out. Luckily, Davis posted an update to her chaotic party, but there’s been a bump in their plans. “I had 10 to 12 single girls that were going to invite a guy, and they all had guys confirmed,” she said, until a bunch backed out. In the last 24 hours before Valentine’s Day, Davis and her friends de ella were swiping like crazy telling dating app matches to come to their party. “So much so that some of us invited the same guy twice,” she said. Now, she has between five and 65 men attending her party.

From her update video, it sure sounded like the blind date party was about to be chaotic, and she was right. In a third video, Davis set up a reality television-themed confessional in the bathroom, where guests would film their reactions to the party. The confessional seemed to be the highlight of the party, since it gained over 558,000 views on TikTok.

“Confession: I did not invite one man to this party,” said one single girl.

“I’m just looking to get married and have babies,” another said in her filmed confessional.

One man, who called himself Joe Danger, showed up to the Valentine’s Day party in a black suit and tie. “I’m here on a reconnaissance mission, I am probably going to say hello and goodbye,” he said.

speaking to The Independent, Davis let us in on her inspiration behind the event. “I hate online dating but love partying with my single friends,” she told us. “So I combined them!”

“The party was so much fun and a lot of people made connections, exchanged numbers, and are even going on dates this week!” Davis shared. When asked if she would throw the blind date party again, she said absolutely yes. “Just maybe not at my house because that was chaotic.”

The blind date party ended up to be a smashing success, and even some love matches were made during the process. In a post-party TikTok video, Davis gave her followers from her all the gossip from the Valentine’s Day party. One of her single friends of her exchanged numbers with a male guest, and they had already gone on two dates. There was even a love triangle among three of the guests. This TikToker’s Valentine’s Day is sure to be one for the history books.