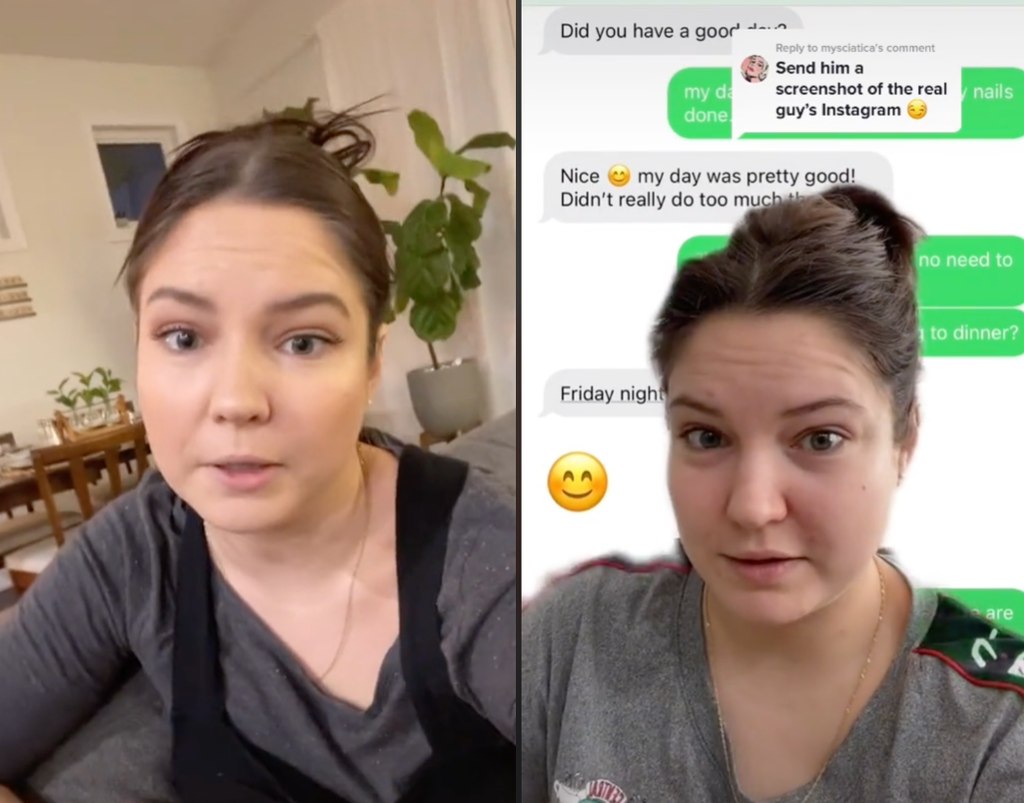 A woman discovered a man on a dating app was a catfish, as he was wearing an Apple watch, which can only work for people who have an iPhone. However, he had been texting her with an android phone.

In a TikTok video posted on January 31, Jocelyn, @jjustjocelyn, explained how she matched with a guy on the dating app Bumble. And as noted on Bumble’s website, “women always make the first move” and have to initiate the conversation within 24 hours or the match expires.

So, after messaging him and chatting on the app, the man asked Jocelyn to get dinner sometime. He offered to go sometime that week, and she then gave him her number.

Jocelyn, who has an iPhone, noticed that when this man reached out to her, his texts were “green,” meaning he had an android phone.

“So this is the guy that I matched with,” she said, including a photo of him in the video. “What is he wearing? An Apple watch.”

As noted by Apple, in order to use an Apple watch, “you need an iPhone 6s or later.” However, Jocelyn emphasized that his green texts were proof that he didn’t have an iPhone.

The TikTok user then did an image search on Google of some of the man’s photos from the dating app.

“And what do we have here, an Instagram model from New York,” Jocelyn explained, showing an Instagram account with the name Ron. The account had posted one of the pictures from the profile Jocelyn matched with.

Jocelyn said that she lived in Ontario, so she couldn’t have matched with Ron. She also shared that the guy from Bumble was going by the name “Myles.”

“Thankfully I hardly spoke to this guy and invested zero per cent of my time,” she added.

When filming this clip, she was also yet to have told the man that she knew he was catfishing her and asked her viewers if she should.

The video has over 686,000 views, so far, with TikTok users in the comments applauding Jocelyn for noticing the Apple watch in the photos.

“That is an impressive observation,” one viewer wrote, while another one said: “That is the most impressive detective work I’ve seen yet!! Love your work.”

Other viewers noted how scary it can be to be catfished like this, especially on dating apps.

“Wow! That’s so dangerous!” one comment reads. “That’s for this story, I just got bumble so I will be more attentive!”

Bumble’s TikTok account also commented on this video and said: “We’re so sorry to hear about this! We’ve found the member and permanently removed them.”

In a follow-up video, Joceyln shared an update, noting that he asked her how her day went and set a time to go to dinner. Shen then sent him a text asking where they were going.

“I think once he nails down a place, I’m going to then send a screenshot and be like: ‘so are you gonna show up or this guy?’ And then send the Instagram [of Ron],” she said.

In another video, Jocelyn revealed that the man never responded to her last message about asking where to meet.

“I’m thinking maybe I saw the TikToks,” she said. She also acknowledged that her Bumble account has been removed.

Although she doesn’t know why he didn’t respond, Jocelyn had her suspicions.

“I’m sure there are a multitude of reasons why he’s not replying,” she said. “Probably because I’m not playing along. He’s looking for some attention, and I’m just wanting to set up dinner, it’s not really fun for him.”

The Independent has reached out to Jocelyn for a comment.