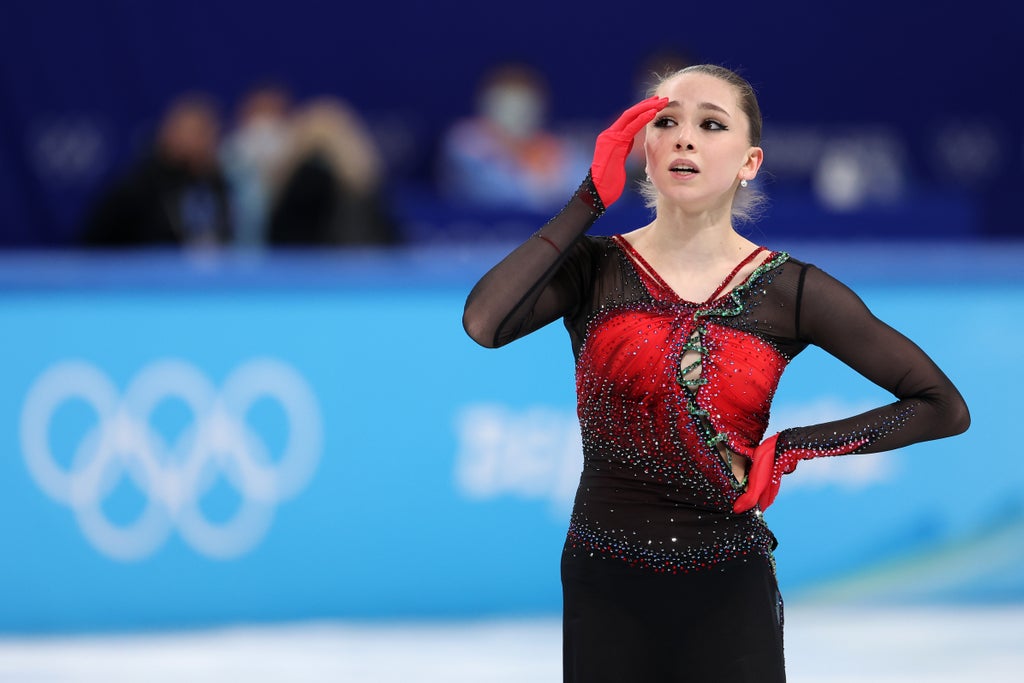 Kamila Valieva took to the practice ice in Beijing as headlines swirled around the wide-eyed teenager at the heart of the biggest story of these Olympics.

Valieva, just 15, is a hot favorite for the women’s figure skating title with most predicting her remarkable story – and even more remarkable performances – would be the highlight of the Games.

But according to news reports in Russian newspapers RBC and KommersantValieva tested positive for trimetazidine, which is used to treat chest pain and angina, before arriving in the Chinese capital.

The drug increases blood flow to the heart and limits rapid swings in blood pressure and has been on the World Anti-Doping Agency’s [WADA] list of prohibited substances since 2014.

Russia won team skating gold on Monday, with the USA and Japan completing the podium. But their planned medal ceremony for Tuesday night was canceled due to a “legal issue”- with no further explanation from officials.

The International Skating Union [ISU] confirmed ongoing legal talks but did not add any information, while International Olympic Committee [IOC] spokesman Mark Adams refused to put a timeline on when medals will be awarded – or a result of the talks announced – during his daily news conference at the Main Media Centre.

“I can’t comment on speculation that I’ve seen overnight,” he said.

“We had a situation arise at short notice that has legal implications and I’m not going to comment on a legal case in a press conference.

“The IOC delegated testing, management and sanctioning to the Independent Testing Authority to avoid the appearance of a conflict of interest. It’s an active legal case and I refer you other partners.”

Anti-doping violations would initially be referred to the ISU’s disciplinary committee but they can be quickly escalated to the Court of Arbitration in Sport (CAS), who have a temporary office in Beijing to hear any matters that arise at the Games.

Those under 16 are considered ‘protected persons’ under WADA’s anti-doping code, further complicating this case.

There is a rule of strict liability when it comes to doping, meaning only athletes are responsible for what is in their system, though the situation becomes more challenging if the individual is a minor.

Legendary Russian coach Tatiana Tarasova initially dismissed reports, insisting: “This cannot be true, people can point fingers at us but we are clean.”

“Let’s, for the sake of understanding, wait for some explanations either from our sports officials or from the International Olympic Committee,” said Dmitry Peskov.

Figure skating is a source of national pride in the country, with Russian and Soviet Union skaters winning 26 medals, including 14 golds, in Olympic history.

However, Russia have not competed under their own flag at the Olympics since they hosted the Games in Sochi, following widespread reports of institutionalized state doping.

However, rivals – dismissed as jealous by Russian media – have increasingly questioned their tactics. Fans claim she treats skaters as ‘perishable goods’, trading their health in return for medals.

She coached Alina Zagitova to gold four years ago, also aged just 15, though she won’t defend her title here after struggles with form, injury and motivation.

Tutberidze’s team are labeled the ‘Quad Squad’ due to their ability to nail the highest scoring jump in the sport, something Valieva achieved during the team competition, making Olympic women’s skating history in the process.

However, it’s claimed there is an excessive pressure to compete at a young age, forcing skaters to become ‘jumping machines’ who quickly become expendable.