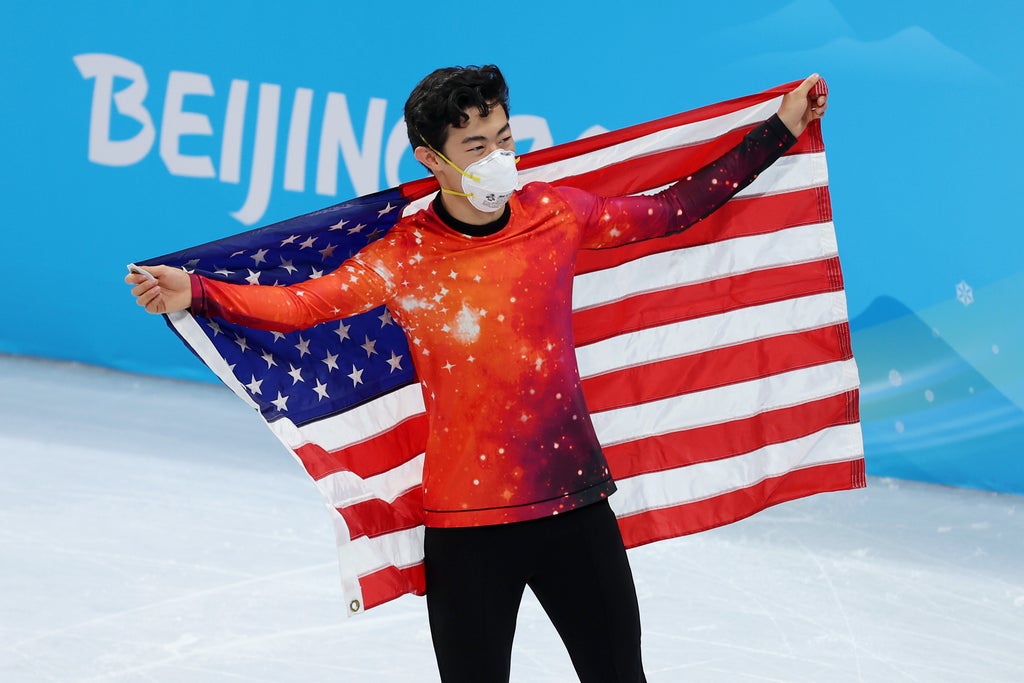 It was billed as the great Olympic showdown but, in the end, high-flying student and higher-flying skater Nathan Chen was simply in a class of his own.

It wasn’t flawless but it got pretty close, Chen landing all five of his quad jumps to become the first American in 12 years to claim Olympic men’s figure skating gold.

The lyrics to Elton John’s Rocket Man- ‘In fact it’s cold as hell’ – seem rather appropriate for frigid Beijing, but Chen lit the touch paper on a red-hot performance packed with his trademark soaring aerial prowess to blow away his rivals and exorcise the demons since four years ago, when he tearfully failed to win a medal in PyeongChang .

This men’s free skate was meant to pitch the three-time world champion into battle with Japan’s Yuzuru Hanyu, seeking a third consecutive Olympic title and skating immortality, with his attempt to nail an elusive quad axel, the hardest jump on ice.

Hanyu’s stuttering short program ruled him out of gold medal contention, though he dragged himself up to fourth with his free skate, getting closer than he’s ever done before to nailing that quad axel in competition – though that peak remains unconquered, for now.

“I think I’m pushing the boundaries,” said Hanyu, who arguably wanted the jump as much as he wanted the medal, with his exploits broadcast live on discovery+, Eurosport and Eurosport app.

“No matter how hard, no matter how unimaginable, I want to push a little bit more for those who have expectations in me. I failed to realize my dream of completing it in this Olympics, but I have worked really hard for it, so I’m proud.”

All of which left Chen largely in a battle with himself, Japan’s Yuma Kagiyama and Shoma Ono taking silver and bronze as the nation claimed three of the top four slots, just not the one they wanted.

Chen has certainly come on since his stuttering first skating lesson in his sister’s white skates aged three, arriving here on the back of a 1,300-day plus winning streak craving a golden punctuation point before he returns to his studies at Ivy League Yale.

He’s long been known for his ability to land the big jumps, he was the first in history to land five quads in a four-and-a-half-minute programme, a feat he repeated today.

But Chen – the first American to win since Evan Lysacek who achieved the feat without a single quad in Vancouver – should not be dismissed as all jumps, no grace, despite his ‘quad-king’ nickname.

His artistry – thanks to his ballet training – also shone as he grinned and fist-pumped his way through a program that even the most casual observer would tell you was streets ahead of his rivals.

And that’s sometimes the beauty of figure skating – you don’t need to be able to pick your sausage from your toe-loop to know what’s good and Chen is good. Very good.

“My mum and dad met in Beijing so winning here means everything,” he said.

“The Olympics is the world to me and I’ll need to take some more time to process it. I never imagined I could be here competing against people like this and being on that podium.

“Yuzuru Hanyu has progressed the sport in ways that could never be imagined, he’s the greatest skater there has ever been and to follow him as Olympic champion is beyond my dreams.

“A few years ago, I didn’t think a quad axel was possible, his (Hanyu) attempt was extraordinarily close, I actually thought he’d hit it. It’s only a matter of time before someone can do it but it’s incredible how after dominating his sport for so long, he is still pushing the boundaries.”

Chen will receive his gold medal on Thursday evening, though he is still waiting for the silver from the team competition, which concluded three days ago.

He was part of the American team but an ongoing legal issue, linked to a reported positive doping case in the gold medalist Russian Olympic Committee team, remains the talk of a sport that arguably likes to gossip more than any other.

“Everything I’ve seen about it is from Twitter. Whatever happens, happens,” he said. “I’m just going to wait and see what ultimately is decided.”