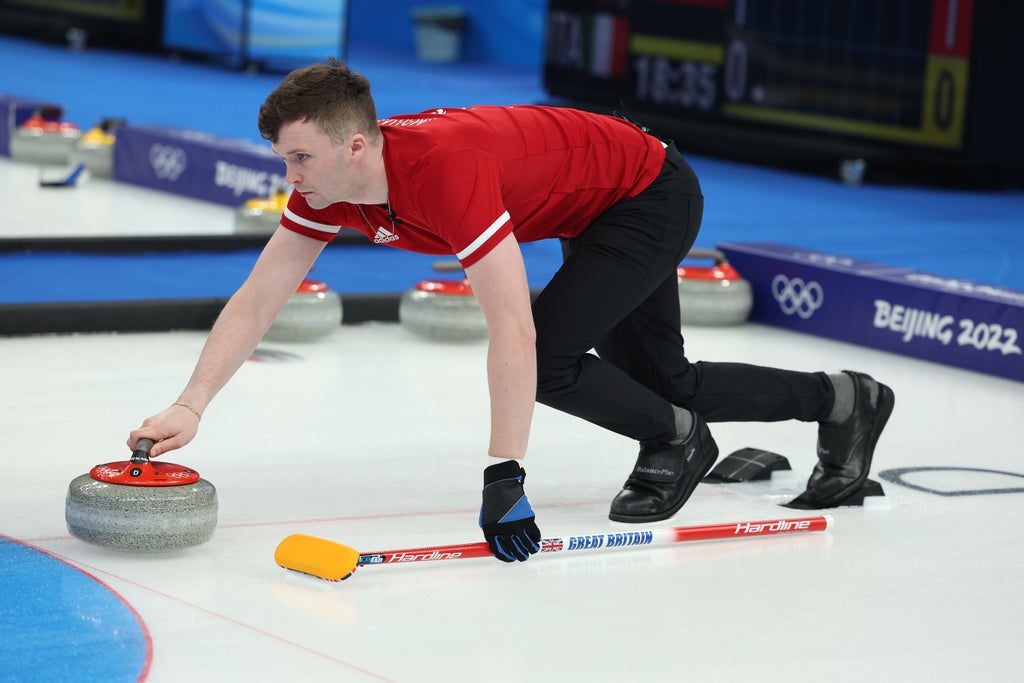 The second day of the 24th edition of the Winter Olympics in Beijing kicked off with mixed doubles curling, with Team GB’s Jen Dodds and Bruce Moat beating Canada’s Rachel Homan and John Morris.

Team USA lost 8-4 to Italy in the second mixed doubles curling result of the day, while China and Sweden beat Australia and the Czech Republic respectively.

Dodds and Moat will return to the ice later in the day to take on Switzerland, competing in the initial round-robin phase against some of their biggest medal rivals.

Canada beat Switzerland in the women’s ice hockey as the North American nation maintained a 14-match winning run in this fixture. China lost in the same sport to the Czech Republic, 3-1.

Japan take the lead against Sweden in ice hockey

Some neat play down the left-hand side of the rink from Suzuka Taka and Chico Osaka opens up some space in the Sweden defence, and an unmarked Shiori Koike is able to receive the pass and slam the puck past Emma Soderberg into the roof of the net.

It’s a great finish from the 28-year-old, who operates as a defender in normal circumstances, but the lack of marking in the Sweden backline was very poor indeed.

Japan have been the most impressive side so far and are full value for their lead at the end of the first period.

Japan’s women are currently taking on their Swedish counterparts at the Wukesong Sports Center.

The score remains goalless in the first period despite the Japanese earning a couple of penalties, but Sweden are defending relatively well so far and both sides are struggling to create real chances.

The favorite for the women’s ski jump gold in Beijing, Marita Kramer, will not be able to participate after contracting Covid-19.

“No words, no feelings, just emptiness,” the 20-year-old Austrian wrote on social media. “Is the world really this unfair?

Veteran Elana Meyers Taylor, meanwhile, is a doubt as she is currently isolating following a positive test and must recover in time to take part. The 37-year-old has medaled at the past three Winter Olympic Games.

The number of positive Covid-19 cases in the Olympic village reached a record 55 on Wednesday.

26 of the cases came from personnel in the closed-loop system, which the Games uses to separate Olympics athletes and staff from the general public, while 29 were new international arrivals.

Brian McCloskey, chair of the Beijing 2022 medical expert panel, said: “The numbers are very small. We are confident that the system will work. But we are not relaxed. We keep all measures in place.”

See also  Collapse due to sick leave due to COVID: this is how the autonomous communities try to manage it | Economy

What life is like inside the Beijing 2022 “closed-loop” system

For a second successive Olympics, Beijing 2022 will be held against the backdrop of the pandemic – here is an insight into what life is like inside the closed-loop system.

In the afternoon curling matches, the scores are tight, with Switzerland leading Italy 6–5 after six ends.

While the USA team of Persinger and Plys are tied up at 6–6 in the seventh end against Norway, who have husband and wife Magnus Nedregotten and Kristin Skaslien back again after achieving bronze in 2018.

The Norwegians played another married couple, Czech team of Zuzana Paulova and Tomas Paul, losing last night 7-6, but Nedregotten has spoken about the special dynamic of playing alongside his wife:

““It’s very fun to be with each other in this adventure – we share everything,” Magnus says. “We argue sometimes and we usually tell the truth to each other which makes the problem come to the surface.

“We need some advice there I think… Better ask the Czechs – they’re married as well and they won. We could do with some advice I think!”

When Christie retired in December, she tweeted: “for now I’ll be focusing on helping the rest of the team and getting into coaching.”

As the Winter Olympics begin in Beijing without the 2017 world champion, former team-mate Thomson threw open the door for Christie to continue in the sport.

Canada beat Switzerland 12-1 in their group A match in the women’s ice hockey. The North American team dominated the game from the early stages and reached the first break with a lead of 3-0.

According to the stats provided by Hockey Canada, Switzerland has never beaten Canada in senior international play – 13 games, 13 defeats. In fact, they’ve only even scored twice. Canada, by contrast, have netted 109 goals in those games.

With this group match win, Canada continues to maintain its record against Switzerland, taking the record to 14 matches, 14 wins and 121 goals, while allowing Swiss players to score a total of three goals.

Czech Republic beat the host nation 3-1 in a group B match in the women’s ice hockey. China fought to make a comeback, but the opposing team maintained a steady lead right from the beginning.

Under the Olympic format, while all five teams of Group A automatically qualify for the last eight, in Group B only the top three teams will enter the quarter-finals.

Rogentin, 27, began skiing at the age of two-and-a half and quickly developed a passion for the sport. I have completed Thursday’s run in 1 minute 44.

He was closely followed by Spain’s Adur Etxezarreta who finished second, trailing Rogentin by 0.08 seconds. Italy’s Christof Innerhofer recorded the third-fastest time with 1 minutes and 44.26 seconds.

The purpose of the alpine skiing training runs is for athletes to get a sense of the track — the first meaningful times will come in Sunday’s opening race.