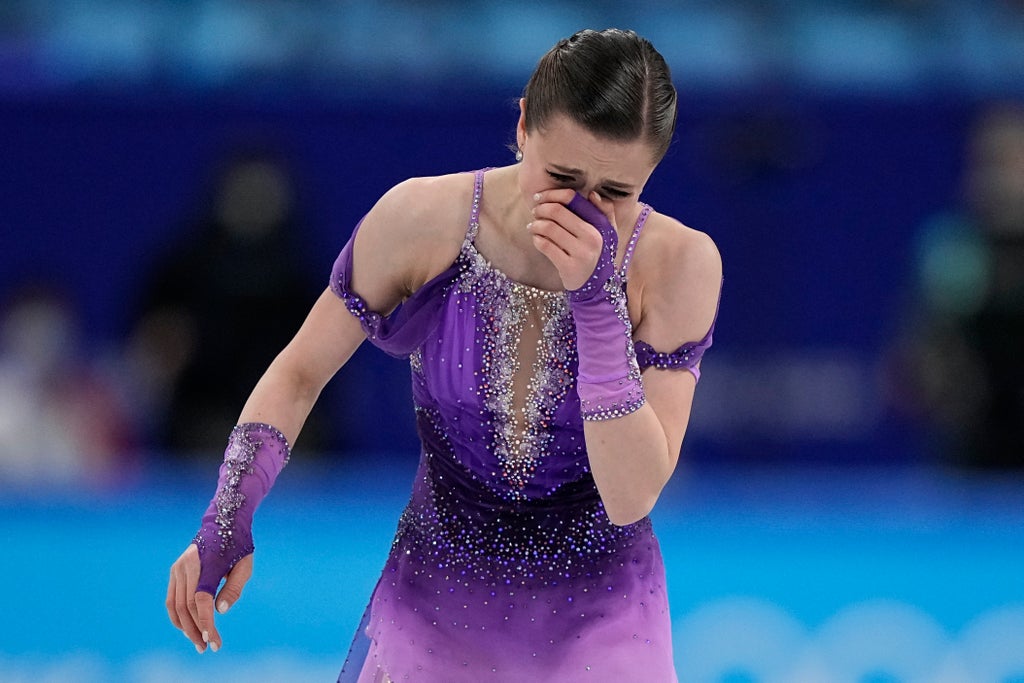 Kamila Valieva fought back the tears after a far from flawless skate left her in control of an Olympic figure skating gold that she may never be awarded.

The 15-year old Russian – controversially cleared to complete by the Court of Arbitration in Sport on Monday – is used to the spotlight but this was another level.

As rival after rival questioned whether she should be skating after her performances, she took to the arena under a glare so searing it was amazing the ice didn’t melt beneath her skates.

But perhaps understandably this was more stuttering than those seemingly carefree performances, the maelstrom swirling around her surely taking its toll.

She made a major mistake on her previously trademark triple axel, which has been plaguing her in practice in recent days. She did n’t fall but a big step out of her cost her valuable marks, her score of 82.16, more than eight points lower than her flawless world best of her.

However, Valieva’s routines are packed with such difficulty that even when not delivered on point, others struggle to match them. The skater dubbed Miss Perfect doesn’t have to be to win.

Valieva claimed European gold by a landslide 22 points but there is some jeopardy ahead of Thursday’s decisive free skate, team-mate Anna Shcherbakova is just under two points behind her, with Japan’s Kaori Sakamoto not much further back.

Shcherbakova refused to answer questions about her training partner and defended under-fire coach Eteri Tutberidze, while Sakamoto added: “Regarding doping there is a lot of talk and I know nothing about the truth or details. I’m focusing on the sport and competition.”

However, if Valieva lands another quad – she became the first woman to do it at the Olympics in the team competition – this is still a competition at her complete mercy.

But all good dramas need a sub-plot and this one has plenty of twists ahead.

And whatever happens no medals will be awarded, the International Olympic Committee making that unprecedented decision after losing a legal bid to prevent Valieva from skating.

Meanwhile, the teen broke her silence, speaking for the first time since news she has tested positive for banned substance trimetazidine, an angina medication, stunned the Games.

“These last few days have been very difficult for me,” she told Russian broadcaster Channel One. “I’m happy to compete but I’m very tired emotionally.”

The bewildered teen admitted her emotions were sapped by sitting through hours of legal testimony as CAS met in Beijing to rule on whether she could compete – but, crucially, not her guilt or innocence over doping charges.

British champion Natasha McKay – who made her Olympic debut – admitted frustration Valieva’s case and questioned the integrity of the CAS decision.

Asked if she had sympathy for the Russian at the heart of the biggest story of the Games, McKay said: “I have sympathy for whoever will be on the podium who won’t be receiving their medals, it’s the most important part of the Olympics and they won’t get that chance.

“I think fair play is important. Something inside me thinks it’s sad. I try to be a good role model,” she said.

“I just want everyone to know that figure skating is a lovely sport. These negative things take away from that. Hopefully, if not in this competition, we can win over the world to remember how amazing figure skating is.”

But former Olympian Adam Rippon, who now coaches American skater Mariah Bell, was the strongest in his criticism.

“We are accommodating Russia,” he said. “I don’t know how the Olympics recovers from this.

“They are a factory that pumps out children who can compete, up to a certain point. It doesn’t feel like the coaches involved in the ladies’ program are coaches at all, but dog trainers; they’re running a circus. They shouldn’t be here at the Olympic Games, they’re clowns.”