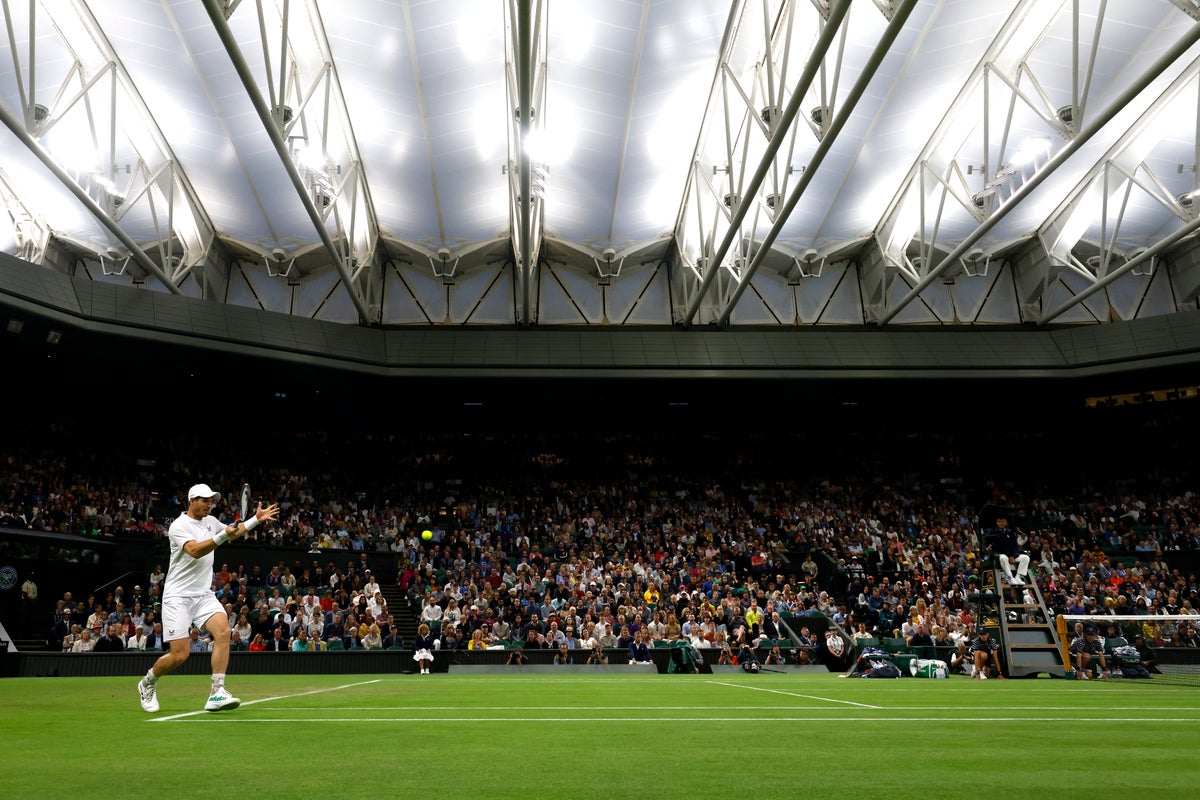 Wimbledon’s Center Court is hosting musical celebrations before a full day of tennis on middle Sunday for the first time to celebrate its centenary.

Veteran tennis broadcasters Sue Barker, John McEnroe and Clare Balding will talk through 100 years of history on the court from 1.30pm, before British singer Freya Ridings performs to thousands of spectators.

Team GB’s Heather Watson will be first in the stadium, playing against Germany’s Jule Niemeier – and later world number one Novak Djokovic will take to the hallowed grass against Tim van Rijthoven from the Netherlands.

Thousands of free tickets have also been given to Ukrainian, Syrian and Afghan refugees, as well as to community groups and schools.

Center Court has been the main stage at the Championships since 1922, when the tournament relocated from SW19’s Worple Road to Church Road.

From Althea Gibson being the first black player to win Wimbledon in 1957, to the now-jailed former grand slam great Boris Becker winning the year the Berlin Wall came down, it has hosted many memorable moments in history.

The court was also bombed in October 1940, during the Second World War, and Wimbledon was unable to repair the damaged section until 1947.

Over the last two years, the tournament has been compromised by coronavirus, as 2020 saw it cancelled, while it had a 50% capacity limit in 2021.

As it returns to its prime in 2022, spectators say that public affection for the court has not wanted over 100 years.

Alison Montague, 77, and her daughter Katherine, 50, both from Kings Bromley in Staffordshire, have been to dozens of Wimbledon tournaments.

Alison, a retired school secretary, said her first visit was in 1950 when players used wooden rackets.

“The players used to wander around, and you could get an autograph – but now you can’t get close to them.”

She added that the atmosphere was “terrific” back then and still is today.

Katherine added: “My favorite time on Center Court was when Roger Federer beat Andy Roddick in the five-set thriller, and they cheered Roddick off the court – he got a standing ovation.

“He actually got more points than Federer, but the crucial points Federer won.

SW19 veterans Maryjane, 75, and Annie, 69, both from Henley-on-Thames in Oxfordshire, sat on Center Court for Sir Andy Murray’s 2013 win.

Maryjane told PA: “The Murray match, when they shut the roof for the first time, that was so exciting.

“Also, I’ve been to finals with Djokovic, Nadal and Federer, and they’ve been absolutely unbelievable.

“They went on late into the night, and you could not go. Could. Not. Go.

“I was also at the 77 final when Virginia Wade won and the Queen was here.”

When asked what makes Center Court special, Annie added: “It just is.

“It’s iconic, and as things change it hasn’t changed too much. The roof didn’t ruin it.”

John Barrington, 73, a tennis coach for an amateur club in Somerset, said he first visited Center Court when it was empty after playing as a junior in Wimbledon Park when he was nine years old.

He said: “I remember being taken to Center Court by my mum, so about 60 odd years ago.

“It was very impressive then and it still is today.”

Marie Selby, 63, a wedding dress designer from Kew, west London, said she has been on the side-lines “many times” including when the Williams’ sisters faced each other for the first time in 2000.

Ms Selby, who was enjoying the championships this year with her daughter, Phoebe, told PA: “You still feel that you’re very close to the players wherever you’re sitting in Center Court.

“Even though it’s expanded as a court you still feel very intimate.

The All England Lawn and Tennis Club (AELTC) is planning to expand Wimbledon into neighboring parkland over the next eight years, adding several more courts including an 8,000-seat show court.

Alex Willis, from the AELTC, told reporters: “It’s become one of the most iconic landmarks in all of sports, and what we’ve really been trying to focus on is looking ahead to the future and what the future of this stadium might be .

“What I would hope is that the purity of the experience remains.”

Ms Willis said she envisages a “Downton Abbey” style development, with planners taking inspiration from “classic Tudor country houses” – but said that even in 100 years the courts will still be all-grass.