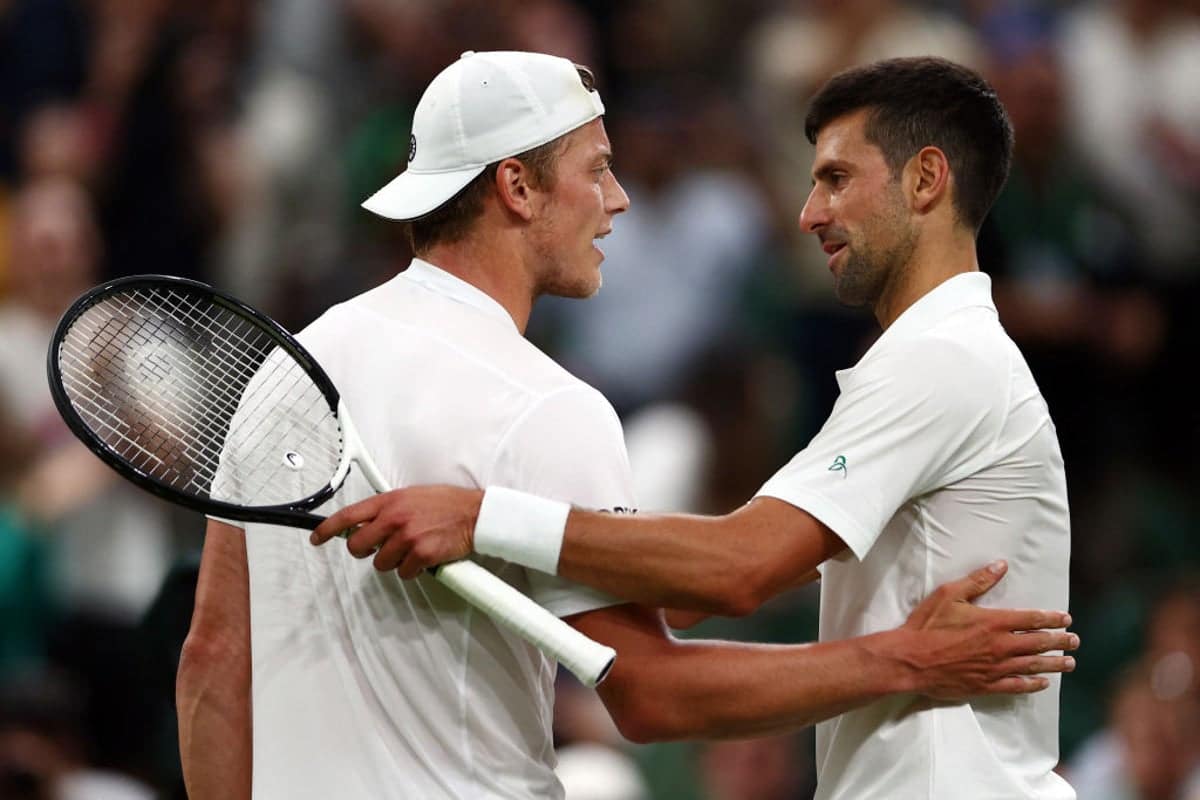 The magical run of Tim van Rijthoven is over but it requires the full powers of Novak Djokovic’s steely edge to break the spell.

After taking the second set to level the match under the lights, the 25-year-old wildcard threatened what would have been one of the biggest shocks in Center Court’s 100-year history. Van Rijthoven had no impact on the sport to speak of until four weeks ago, when he won his first match on the professional tour and followed it up by beating all before him on grass. For a moment it looked as if the six-time Wimbledon champion would be the latest to be swept aside by his wave from him but Djokovic backed down on his relentless grit to take a 6-1 4-6 6-1 6-2 win in over two and a half hours.

“Come on Tim,” is a popular shout around Wimbledon during most matches at SW19 but the Center Court crowd found a new hero in Van Rijthoven. There was something special unfolding as the Dutchman’s forehand began to find its mark following an inaccurate start. Bolstered by an emphatic serve, Van Rijthoven had the weapons and firepower an upset of this scale demands but Djokovic pressured and squeezed his opponent with a relentless return game and faultless hitting from the baseline to run away with the third set and then the match.

By then, most of the fraught tension had subsided but it remained a gripping encounter until the end. Djokovic has not lost a match at Wimbledon since 2017 but few since have given him as much of a scare as an opponent who until last month was ranked 205th in the world. Djokovic had to summon the best of his determined defensive game to put away a player whose lose defeat was against the World No 375 Otto Virtanen in qualifying for the Surbiton Open, and it was not until 10:40pm that his task was complete.

Van Rijthoven won just his first match on the ATP Tour last month before going on to defeat top-10 players in Felix Auger-Aliassime and Daniil Medvedev in the same tournament at s-Hertogenbosch. It captured one of the unlikeliest titles in tennis history and his ranking jumped from 205 to just outside the top 100 as he landed a deserved wildcard for Wimbledon, where the run continued and stretched to eight victories on grass.

“He was on a streak on this surface and I knew it would be tough,” Djokovic admitted but the opening exchanges did not suggest there would be much of a contest. Djokovic breaking on his first service game was an ominous start but the Dutchman appeared to loosen up after falling behind.

Djokovic’s serve got him out of trouble when Van Rijthoven had two opportunities to level. After testing Djokovic with a dipping forehand on the run at 4-2, on break point his one-handed backhand broke down and consecutive misses saw Djokovic emerge unscatched. Djokovic, unflinching and too clinical, then broke Van Rijthoven with a gorgeous backhand down the line to take the opening set.

Van Rijthoven, firing for the lines, continued to make errors on the backhand side and it allowed Djokovic to play a more conservative game. The match became much more competitive when Van Rijthoven tightened his groundstrokes, now being whipped viciously and with delicious top-spin, and it helped him to break the six-time champion’s serve to lead in the second set.

Center Court was beginning to warm to its underdog and Van Rijthoven delighted the crowds with a series of passing winners to put pressure on Djokovic. The 35-year-old puffed his cheeks when Van Rijthoven aggressively threw back his slice and then the Dutchman powered the smash following another entertaining exchange to edge ahead. In serving it out, Van Rijthoven endured multiple break points but was bolstered by a rising number of aces and a further bullet sealed a remarkable set against the 20-time grand slam champion.

But with his back against the wall, Djokovic found his best level. Just like the opening set, Djokovic broke Van Rijthoven to start the third with a backhand pass conjured from what was threatening to be a more than awkward evening. He raced into a 5-0 lead in the third after breaking again with a couple of sublime lobs and defensive plays, always forcing Van Rijthoven to play the extra shot. Any Van Rijthoven serve that was not perfect was punished on the returns, and even then Djokovic was often able to turn his formidable weapon into opportunities.

Djokovic’s vice-like grip tightened on Van Rijthoven and with the clock ticking towards the 11pm curfew, the Serbian raced to close out the victory. Every point became a struggle for Van Rijthoven and Djokovic finished with two winners on the backhand and forehand side to seal the victory. The warm and respectful embrace at the end was telling of what Djokovic was forced to overcome and he will continue his quest for a fourth Championship in a row against the 20-year-old Italian Jannik Sinner in the quarter-finals.