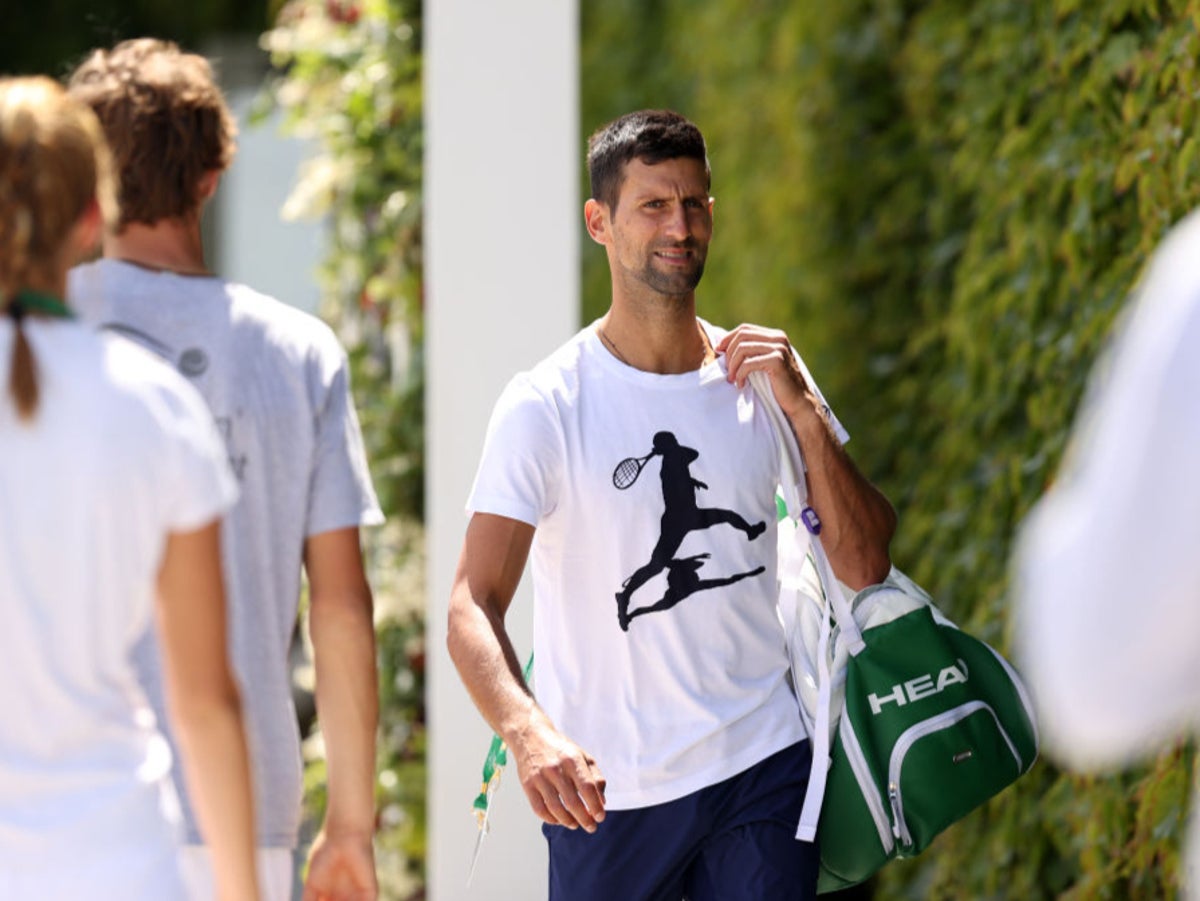 Wimbledon: Nadal cruises into quarter-finals while Kyrgios battles to win in five sets

Follow all the action as the singles quarter-finals get underway on Day 9 at Wimbledon. Defending champion Novak Djokovic ended the fairytale run of Tim van Rijthoven in the fourth round as the Serbian looks to win the men’s title for the fourth time in succession. He will now open the action on Center Court this afternoon against the Italian No 10 seed Jannik Sinner, who defeated Spanish breakthrough star Carlos Alcaraz in the previous round. The second men’s quarter-final this afternoon features Cameron Norrie against the world No 58 David Goffin. Norrie is the last Briton standing in either singles draw and is bidding to reach the first grand slam semi-final of his career.

The first women’s quarter-final sees No 2 seed Ons Jabeur take on Marie Bouzkova. Jabeur is the overwhelming favourite, having yet to drop a set so far. Bouzkova, ranked No 66 in the world, is a somewhat surprising name in the latter stages of the draw but she produced an emphatic upset against Caroline Garcia in the fourth round. It is far less of a shock than the second women’s quarter-final being played today, which is an all-German clash between Tatjana Maria and Jule Niemeier. Maria’s best performance at Wimbledon came back in 2015 when she reached the third round while 22-year-old Niemeier, who ended Heather Watson’s run, is making her debut in the main draw.

Follow all the action, scores and results from Wimbledon live below:

“It’s pretty interesting,” Cameron Norrie replied, as the British No 1 and the hope of Wimbledon was asked how British he really felt. A tennis player born in South Africa to a Welsh mother and Scottish father, raised in New Zealand and whose college education took him to the United States now carries the weight of a nation at the All England Club. As the question implied, though, which one? “My background is obviously from various places,” Norrie went on. “But I’m living here, based here…”

It means there will be a British quarter-finalist at Wimbledon, with Norrie becoming just the fifth man in the open era to reach the last eight of the Championships, but he won’t be playing on Center Court. Instead, Norrie will face Belgium’s David Goffin on Court No 1, scheduled second to Novak Djokovic’s match with Jannik Sinner, and so the unassuming 26-year-old continues to fly under the spotlight that his unheralded rise to the top level of the sport has yet to grab.

That may be beginning to change.

A reminder of today’s show court action, with Novak Djokovic on first on Center Court. Britain’s Cameron Norrie goes up against David Goffin later for a place in the semi-finals of Wimbledon…

There may only be one Briton left in the singles draw, but Hannah Klugman and Hephzibah Oluwadare are currently out on Court 17 competing in the first round of the girls’ doubles.

Elsewhere, in the ladies’ doubles on No 2 court, the second seeds Barbora Krejcikova and Katerina Siniakova are in trouble after going two breaks down in the opening set against Nicole Melichar-Martinez and Ellen Perez.

One player who has leapt to Kyrgios’ defense is in fact his opponent in the quarter-final, Cristian Garin, who won a thrilling five-set match against Alex De Minaur yesterday.

“I think Nick is a very good player. For me, maybe the best serve on tour,” the Chilean said. “Yeah, I’m in quarter-finals, you know you will play the best players in the world. He is for me one of the guys that I like to watch. He’s very good for tennis.

“I think Nick has to be seeded because he for me is one of the best players on the tour and on grass obviously. I mean, the opportunities you have to build. If we are in this round, we both beat good players.

“I don’t see like an opportunity. I just want to enjoy, play my best, and fight every point as I always do.”

When Kyrgios stepped out on court, his fellow Australian De Minaur was two sets up against Garin but the 26-year-old produced a sensational comeback and saved two match points before he edged a thrilling tie-break to claim a 2-6 5- 7 7-6 (3) 6-4 7-6 (6) victory.

“I look at it as a big opportunity,” Kyrgios admitted. “Garin is obviously playing great tennis. I walked on Center Court with seeing the score two sets to love De Minaur. They were in a battle.

“I was expecting to play Alex. I think Alex is a bit more comfortable on the grass. Then when I walked off the court and I got told it was Garin. It was surprising.

“I look at it as an opportunity but I need to do so many things before that match to get ready.”

Of course, the talk of Wimbledon remains Nick Kyrgios, who came through a five-set thriller against Brandon Nakashima. He is playing the role of the hero and the villain, often at the same time, and is taking delight in knowing that “so many people are upset” by his progress to the quarter-finals.

Novak Djokovic faces what should, at least on paper, be his toughest test of the tournament so far in Jannik Sinner on Center Court this afternoon. However, the defending champion certainly didn’t have it all his own way in the previous round as he ended Tim van Rijthoven’s fairytale run in four sets.

Tatjana Maria is the oldest player left in the women’s singles draw at 34 years old and, this time last year, she was on maternity leave after giving birth to her second child.

Ahead of her fourth-round match on Sunday, she took her eldest daughter, Charlotte, to practice. In the afternoon, the world No 103 knocked out the twelfth seed and former French Open champion Jelena Ostapenko to reach the quarter-finals.

“Automatically people think, ‘OK, she got a child, so that’s it,’” Maria said. “[But] there was always the belief I can do it.”

Cameron Norrie is the last Briton standing in the singles draw. He’s already on the best grand slam run of his career but a semi-final clash against Novak Djokovic is within touching distance now. Here, Jamie Braidwood looks at Norrie’s unassuming rise to being the ninth seed.

As we enter the latter stages of the tournament, the action has been reduced to just two matches on each of the show courts. Play will still get underground at 11am on the outside courts though with plenty of doubles action.

welcome back to The Independent‘s live coverage of Wimbledon as the quarter-finals get underway on Day 9.

In the women’s draw, the favorite Ons Jabeur, who is yet to drop a set in four matches, takes on the world No 66 Marie Bouzkova. The 23-year-old Czech has shocked many this fortnight after she defeated seventh seed Danielle Collins in the first round and then pulled off another upset on Sunday by defeating Caroline Garcia.

The second women’s quarter-final being played today is an all-German match-up between Tatjana Maria and Jule Niemeier. It is the first time Maria, 34, has made it past the third round of a grand slam since 2015 while Niemeier, 23, is competing in the main singles draw at Wimbledon for the first time.

In the men’s draw, Novak Djokovic continues his bid for a fourth successive Wimbledon title against Italian No 10 seed Jannik Sinner. Djokovic has looked somewhere close to his imperious best but did have to stave off a brief comeback against Tim van Rijthoven in the previous round.

The second quarter-final sees Cameron Norrie, the last Briton standing, take on David Goffin. Norrie has grown in confidence through the tournament and defeated both Steve Johnson and Tommy Paul in straight sets, however, Goffin, 31, has shown form in the past at Wimbledon and made the quarter-finals in 2019 too.