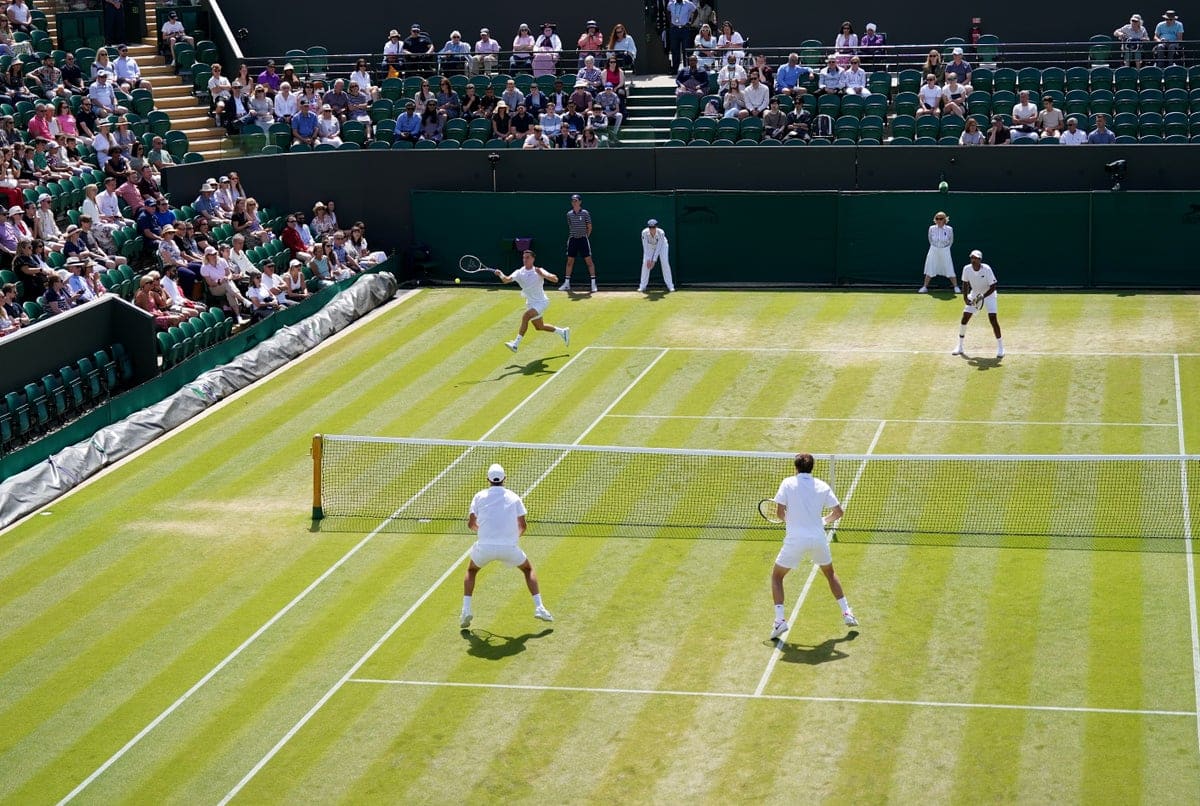 Top seeds Joe Salisbury and Rajeev Ram put a row over HawkEye behind them to edge a five-set battle against Nicolas Mahut and Edouard Roger-Vasselin to reach the semi-finals of the men’s doubles at Wimbledon.

Londoner Salisbury and American Ram are bidding for their third grand slam title together but were pushed all the way on Court Two before completing a 6-3 6-7 (1) 6-1 3-6 6-4 victory.

There was a contentious moment in the second set when Salisbury and Ram were convinced HawkEye had made a mistake by ruling a Roger-Vasselin volley was in.

The duo, ranked the best in the world, argued their case vociferously and called to no avail for the machine to be switched off but refocused after losing the set on a tie-break to make the last four for the second successive year.

“We were 100 per cent convinced that the HawkEye was wrong,” said Salisbury. “Obviously we wouldn’t have done what we did and asked for the supervisor and all that if we weren’t completely convinced the ball was out.

“We thought it was a long way out. We couldn’t even believe they challenged it. I guess there’s a chance we all saw it wrong – the line judge, the umpire, us. Maybe we all need to get our eyes checked.

“Obviously we got pretty ridiculous about it, pretty frustrated. We would have been serving for the second set. For some people it helps. For me it just makes me angry and I don’t really respond very well. Managed to put it out of my mind.”

Salisbury showed remarkable defensive skills at the net to set up match point and then drilled a return down the line, roaring in celebration.

“I think that’s our first five-set win,” said the 30-year-old. “We played one a few years ago where we lost 13-12 in the fifth. I think we were just really happy how we stuck with it the whole match. They’re a really tough team.”

Having lost to eventual champions Nikola Mektic and Mate Pavic in the semi-finals 12 months ago, Ram and Salisbury will bid to go one better when they meet Matt Ebden and Max Purcell, who they lost to at the same stage of the Australian Open.

“We didn’t play very well in that match so it’s nice to get another chance to play against them,” Salisbury said. “We know they’re going to be a really tough team.”

Oxfordshire’s Jasmine Conway is through to the quarter-finals of the girls’ singles after a comfortable victory over Japan’s Hayu Kinoshita.

The 17-year-old, who lost in the first round last year, is yet to drop a set and was an impressive 6-4 6-1 winner against Kinoshita.

Conway, who will take on Czech Linda Klimovova next, is bidding to become the first British girl to make the semi-finals at Wimbledon since Laura Robson in 2010.

“I’m happy to be in the quarter-finals,” she said. “I didn’t expect it, I haven’t had a lot of grass-court practice but this is all good experience for me. I feel like I’ve been serving well and that definitely helped me win the match today.”

Conway is not allowing herself to dream of silverware just yet, saying: “I try not to think about it because I think if you get too ahead of yourself it takes you away from the process of the matches and what you have to think about. I’m just trying to focus on each match as it comes.”