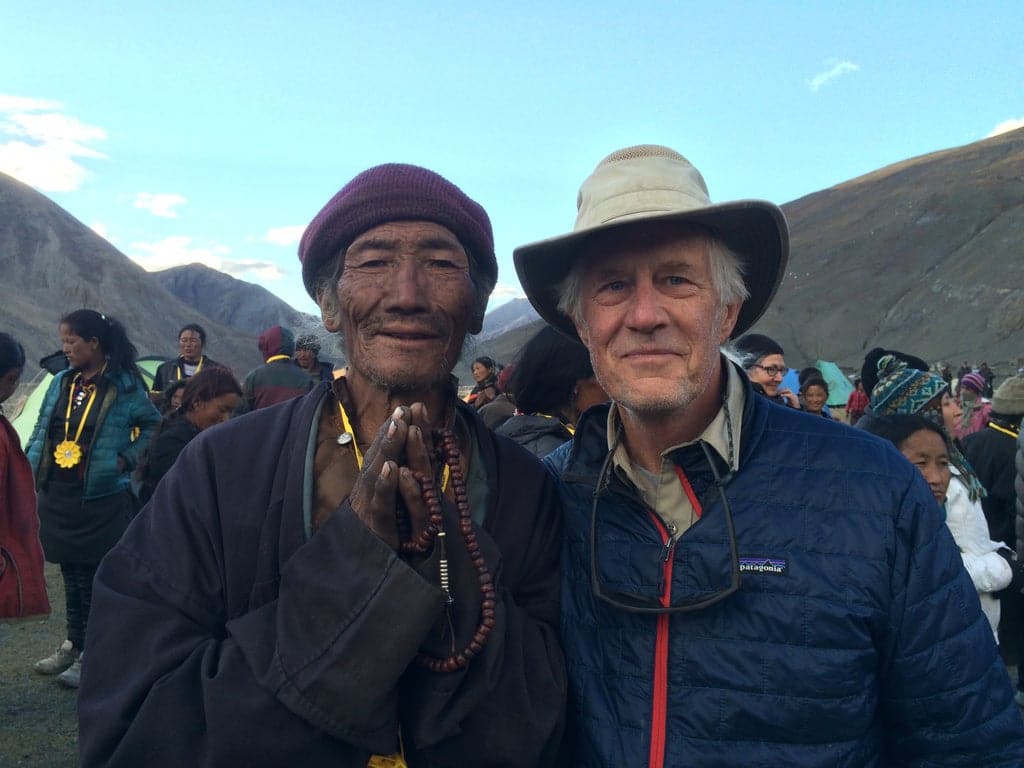 After decades spent writing about climate change and species loss, William deBuys found himself a passenger of Yeti Airlines in 2016, heading for a single runway on a bulldozed ridge in the remote Himalayan mountain region of Upper Dolpo.

“I was sort of heartsick,” the author and lifelong conservationist told The Independent during a video call from his home state of New Mexico last week. “I was looking for a useful way forward; to be able to look at the environmental facts clearly without shrinking back, and not to lose heart.”

Mr deBuys had turned to a friend for help. In response, Roshi Joan Halifax, the renowned Buddhist teacher and activist, invited him to join the Nomads Clinic, a six-week, 150-mile trek on foot and horseback into the remote and ethnically Tibetan region of northwestern Nepal. The mission’s focus was “care over cure”, and providing basic medical treatments for local people in a place of scarcity and extreme geographical limits.

“Those are some lonely precincts out there,” Mr deBuys says. “That’s an experience that takes you to a different part of yourself.”

The Trail to Kanjiroba – Rediscovering Earth in an Age of Loss is the book which emerged from Mr deBuy’s experiences in the so-called “attic of the world” as part of Nomads expeditions in 2016 and 2018.

“It’s going to bring a lot of terrific people to Santa Fe, and energize and light up a side of our community that hasn’t perhaps had the attention that it deserves,” he said.

In much of his writing Mr deBuys, who was raised in Baltimore, has painted vivid portraits of the American West, including the rugged landscape of the Sangre de Cristo mountains in northern New Mexico where he has lived since arriving half a century ago, “fresh out of college and very wet behind the ears”.

Woven throughout The Trail to Kanjiroba is the concept of “care over cure” as the expedition team do what they can for villagers, even if treatments don’t work or only offer temporary relief. The mantra came from Roshi Halifax’s work with the dying which advocates that, once a cure is no longer possible, focus on making the best of the days that remain.

Watching medics at work in Upper Dolpo, left Mr deBuys thinking about how to apply the ethics of hospice to caring for the planet. “The proposition is this: what if we focus less on ‘saving’ Earth and more on caring for it? What would change in the work of Earthcare, and more particularly, what would change for the caregivers?” I have writes.

The doctors and nurses were his “role models”, Mr deBuys told The Independent.

“I’ve been doing environmental work since Noah’s flood it seems like, and one does have to try to pace oneself and struggle for balance. I’ve lost my balance a time or two. Now, when I begin to feel like I’m losing my grip, I try to imagine how [the doctors and nurses] would handle the next case.”

Covid has caused another layer of hardship with the virus running rife in remote villages, and medical missions have had to be put on hold.

“It’s a severe health problem at that very high altitude,” Mr deBuys says. “The cold environment means all rooms are small and stuffy, so it’s hard to get away from the virus. The danger of respiratory disease is great.”

Even at its disconnection from the rest of the world, Upper Dolpo has not escaped climate change. The glaciers of the Himalayas are shrinking faster than those in other parts of the world.

“Rains come when they shouldn’t or they’re not coming when they should,” Mr deBuys says. “There are avalanches in places that never had [them]. Damage from floods to irrigation infrastructure in villages is enormous. The scale of adaptation needed in an area of ​​such scarcity is unimaginable.

“They require a lot of manual labor which is scarcer and scarcer, because so many of the young people have moved to Kathmandu and other cities, and only the parents and the grandparents are left behind on the family farmstead,” he said.

He writes that the people of Dolpo “did not create the bundle of woes that melts their glaciers and renders their grasp on subsistence more tenuous”.

He told The Independent: “It’s going to be hard slog, and the people who suffer are mostly going to be people who didn’t contribute very much to the problem. Those of us who have the means to offer compassion and assistance; to provide some of that care over cure, we need to be ready to show up.

“We have to steel ourselves to be able to deal with a lot of hard situations over a long period of time, and not run out of energy, commitment, [and] heart.”

Half a world away, Mr deBuys has also watched climate change ravage the landscapes of the American Southwest, an area which rises from desert plains to Arctic Alpine mountain peaks.

“This part of the world contains a concentration of ecological and cultural diversity that is possibly unmatched anywhere else in North America, perhaps far beyond there,” he says.

“Things are always changing, always lively. I have been here a long time and still one of my favorite things to do is get in the car, go out and explore New Mexico.”

The region is the fastest-warming place in the US after Alaska. Recent years have brought a grim march of triple-digit temperature records and a prolonged “megadrought” resulting in massive biodiversity loss and ushering in, a transformation that will impact how people live for generations.

At home, Mr deBuys says that his own version of “Earthcare” has been helping to acquire lands for parks and national preserves including the Valles Caldera National Preserve, a space of vast mountain meadows and abundant wildlife.

“I think that part of what we need to do is become latter-day Noahs and build ‘arks’ in the shape of parks, refuges, protected areas, and reserves to support the preservation of the most beautiful and most diverse aspects of the biota ,” he said.

“The more arks we launch into this pretty inhospitable-looking sea of ​​the future, the more chance we’ll get through to the other side.”

The inaugural Santa Fe Literary Festival will be taking place between 20-23 May 2022. The four-day event is set to explore issues at a time of extraordinary change – in politics, race, immigration, the environment, and more. The Independent, as the event’s international media partner, will be providing coverage across each day of the festival as well as during the lead up with exclusive interviews with some of the headline authors. For more on the festival visit our Santa Fe Literary Festival section or visit the festival’s website. To find out more about buying tickets click here.