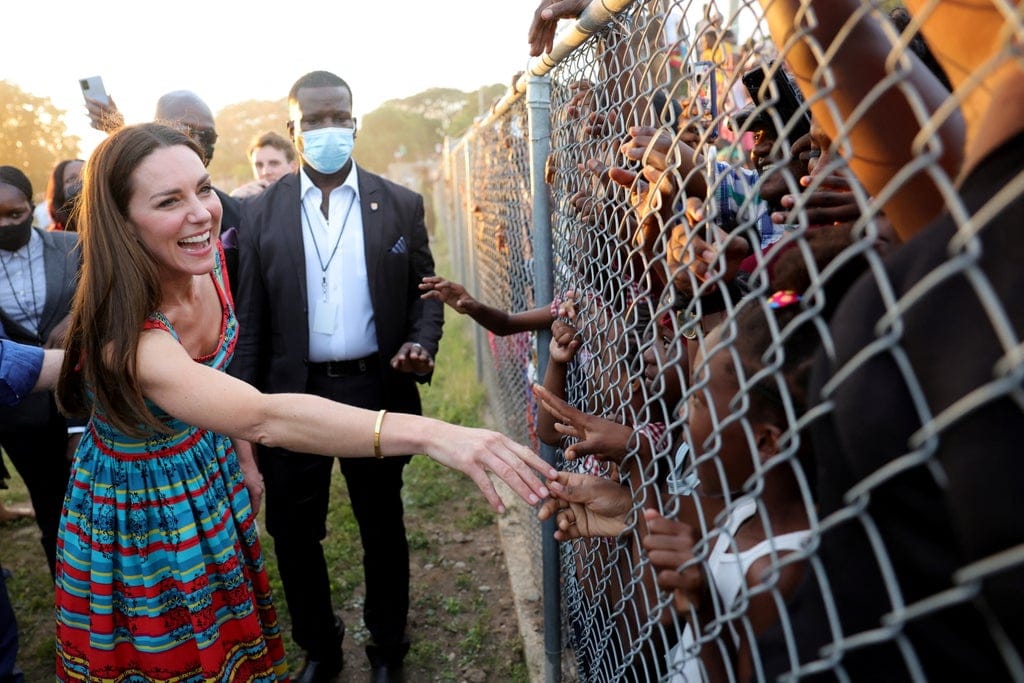 William and Kate’s royal tour of the Caribbean has been marred with disquiet and protest calling for reparations from slavery.

Shortly after they landed, the Duke and Duchess visited Trench Town, in Kingston, which is the birthplace of reggae music. It was there that Prince William joined Manchester City’s Raheem Sterling, Aston Villa’s Leon Bailey – who reportedly flew in from the UK at a personal invitation from Prince William – and young footballers on the pitch for what has been touted as a friendly game.

This came before the Duke hailed the Black sports stars as two of his “heroes”, even though he has failed to directly condemn the racism faced by both in any meaningful, public way.

Prince William and Kate joined local musicians in playing nyabinghi drums during a visit to the Trench Town Culture Yard Museum – Bob Marley’s former home – in what has been described as a “celebration of reggae” and the music legend’s legacy.

The beating of these instruments is typically accompanied by the chanting of songs and calling upon African ancestors for guidance in the face of systemic adversity in a spiritual practice that dates back centuries.

Watching the royals participate in this ritual would grate upon the soul of any individual who has even an ounce of empathy and vague appreciation of world history. Make no mistake, it was absolutely awful to see and downright offensive in the context of 300 years of Black slavery made possible by members of their family. What next – licking the chalice?

As photographs of the royals standing awkwardly next to a statue of Marley emerged, online commentators were struck by this gesture during a trip that’s been dubbed as a “charm offensive”, geared at convincing Jamaica to keep the Queen as Head of State.

Indeed, Carolyn Cooper – professor emerita at the University of West Indies – told me: “Bob Marley’s message was about emancipation, chanting down systems of oppression and contesting the very notions of royalty that William and Kate represent. So… this move means that they simply do not understand what his legacy is and therefore that celebration (of Bob Marley) is nothing but a charade.

I hear detractors cry: “Oh but it’s possible for one to appreciate a person’s art and music without understanding their legacy”. To this I say that there is art and there is activism. The reason why Bob was elevated to legendary status following his death was because of his profound message from him.

Reggae music, as a whole, highlights the experiences of the oppressed at the hands of the powerful and privileged, galvanizing African people across borders to walk tall in their divine Blackness and “stand up for their rights” – to quote the famous song. Reggae is far from just being about nice melodies and entertainment.

It celebrates the courage of the Black people in their struggle for freedom and justice, and their unrelenting resistance in the face of well-orchestrated hardship – the oppression which Prince William and Kate represent by virtue of the institution they’re part of.

The Cambridges ought to have a sense of responsibility for not only righting the wrongs of the past – but addressing the ongoing injustice too. While the royal household recently published, for the first time, its staff diversity statistics and pledged to make improvements in this area – Kensington Palace refused. When Meghan Markle, their mixed-race sister-in-law, was targeted by parts of the media with dog-whistle racist attacks – Kensington Palace were silent. Many would be forgiven for being disappointed with the Cambridges’ track record on race.

Celebratory headlines like “Prince William and Kate get the full Bob Marley experience’” are misleading. They haven’t really, have they?

Would Bob be turning in his grave watching the Cambridges? I don’t know – it’s not about that. I don’t profess to speak on behalf of Marley’s estate or Rastafari, and I note that the Rastafarians who were happily beating drums seemed rather content with the visit.

However, what we do know is that Marley rejected the idea that an institution should wield power over anybody and this much is reflected in his lyrics including “Crazy Baldheads” or “War”, where he sings: “Until the basic human rights are equally guaranteed to all, without regard to race, this is war.”

There’s a lot to be said about the commodification of Brand “No problem when there’s plenty problems because of colonial legacy” Jamaica and how it almost exclusively benefits white and powerful people – but this reggae spectacle from the royals really does take the biscuit.

Furthermore, to announce your selves as heading to Jamaica in what is increasingly looking like a forced celebration of the British monarchy is completely offensive. The people of Jamaica, a supposedly sovereign nation, were not consulted about the royal visit – they were informed of it and it was foisted upon them whether they liked it or not (as the protest evidenced).

This reflects the power dynamic between Britain and Jamaica’s relationship. And, worse, this comes a time when the country is struggling more than ever due to the impact of Covid-19 on its main industry of tourism, which is largely propelled up by pandering to white visitors.

The royal family personally and institutionally profited from genocide of indigenous people and the enslavement of at least 12.5 million African people. Tens of thousands were overthrown or died by suicide at sea, during the barbarous transit via ship from Africa to the Americas; many more were worked to death. Enslaved African women and men were raped and exploited by white slave masters; many were forced to witness their children being sold to different plantations or made to work in the fields from age of 6.

Centuries later, people like me bear the surnames of our fore parents’ white slave masters who bought and sold them as property, denying us an authentic identity and making it hard for us to trace our lineage back to Africa. My name isn’t White by coincidence.

For centuries, my ancestors were trapped in a system of physical, sexual and psychological bondage, the latter of which has spanned across generations up until the present day. Now, colonialism is embedded into every institution that we navigate today, propped up by a ruling class of white families who were paid billions of pounds in reparations from the British government after slavery was abolished, while enslaved families received nothing.

And yet, the vast majority of – although not all – commentators, appear to be clueless about history, the legacy of the empire and the sensitivities around William and Kate’s visit. There appears to be a complete lack of empathy for others and an inability to see things from other people’s point of view.

LBC host Camilla Tominey asked anti-racism activist Femi Nylander: “Hasn’t the Queen done everything in her power, hasn’t she, to ingratiate herself with and celebrate and help the progress of Commonwealth countries?”

But the wealth isn’t common, is it? The Commonwealth smacks of Empire 2.0. If it isn’t, then please explain what Britain has done to truly advance the interests of Jamaica. Centuries-long calls for slavery reparations have been ignored by every monarch.

I listen to the cries of Jamaican family and friends whose travel prospects are limited because they’ve been turned down for visas to the UK, for no good reason at all. I’m mindful of Windrush victims who were unlawfully stripped of their rights by the state – the vast majority of them are Jamaican. Continued racism and state-sanctioned discrimination towards Jamaicans is alive and well.

Today, the royals will visit a hospital where, I’ve been told, staff were warned by the government in advance to take the bus in because the visit means there won’t be enough parking space for them to park cars. They’ll appraise an aspect of the healthcare system which may have been teeming with more, much-need medical practitioners were it not for Jamaica’s ongoing brain-drain which means many talented young people migrate for better economic prospects overseas.

Jamaica’s medical infrastructure has outgrown its efficiency to the expanding and aging population. It’s not uncommon for people living in rural areas to travel very far just to see a doctor. What will the Cambridges do to address this? How much money will their family commit to erasing the island’s astronomical debt?

Throughout every royal visit, British monarchs can be seen dancing and mostly indulging in fun and frolic, as opposed to committing to engineering meaningful change for the betterment of many, before they clear off and go back to their palaces. But it’s extraordinary that royalists seem blissfully unaware of how disastrously tone deaf this visit has been.

In any case, it may all be in vain. Multiple senior political sources in Jamaica told The Independent that the process, albeit long, of removing the Queen as head of state has already begun.