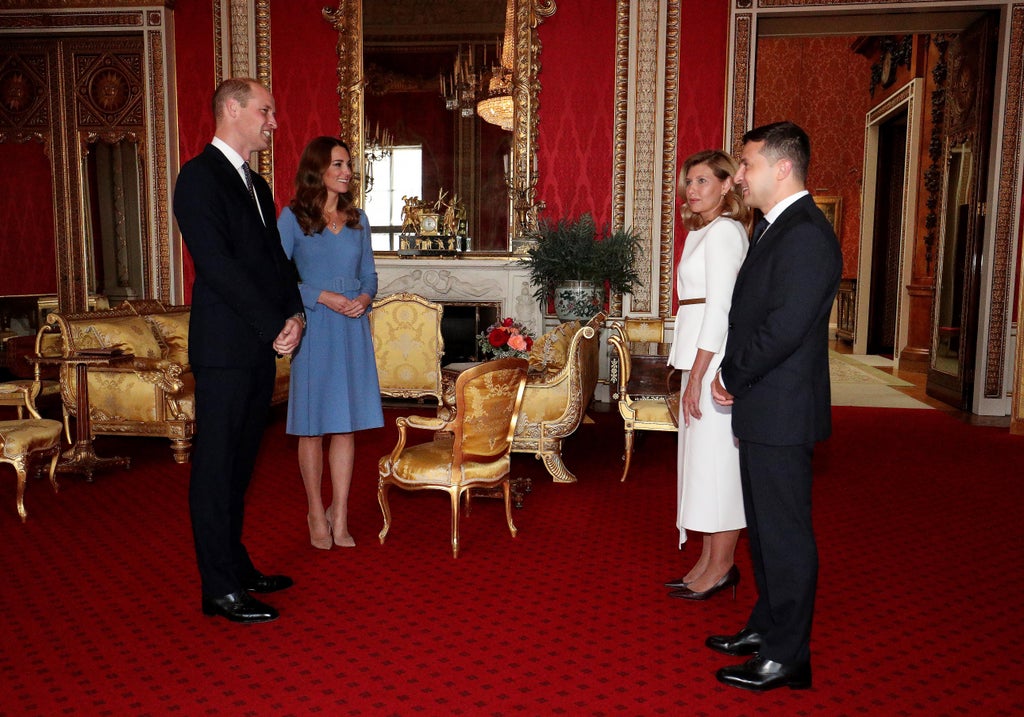 The Duke and Duchess of Cambridge have expressed their solidarity with the people of Ukraine.

William and Kate tweeted their support for Ukrainian President Volodymyr Zelensky and “all of Ukraine’s people” in a tweet personally signed off with their initials.

The couple included the flag of Ukraine in their tweet, which was retweeted by Prime Minister Boris Johnson.

They wrote: “In October 2020 we had the privilege to meet President Zelenskyy and the First Lady to learn of their hope and optimism for Ukraine’s future.

“Today we stand with the President and all of Ukraine’s people as they bravely fight for that future W&C.”

In October 2020 William and Kate welcomed Mr Zelensky and his wife Olena to Buckingham Palace for an audience on behalf of the Queen.

The royal pair met the president and his wife, who were on a two-day visit, in the palace’s Throne Room.

Royal biographer Hugo Vickers told the PA news agency that he would describe the tweet as “more humanitarian than political”, adding: “I am sure it will be welcomed by the British public.”

On Thursday, the Duke and Duchess of Sussex also expressed their support for Ukraine.

In a message on their Archewell website, they said: “Prince Harry and Meghan, The Duke and Duchess of Sussex and all of us at Archewell stand with the people of Ukraine against this breach of international and humanitarian law and encourage the global community and its leaders to do the same.”

President Vladimir Putin was welcomed to the UK in 2003 for a state visit – the first state visit by a Russian leader since the days of the Tsars when Russia’s Alexander II came to Britain in 1874.

Then it was a family affair as the Tsars were related to the British royals.

President Putin was given the full red carpet treatment as he arrived with his wife at Heathrow airport, with a guard of honor from the RAF lining the stretch of red carpet leading from his aircraft to the airport exclusive Royal Suite.

On his four-day visit, the Russian leader visited Edinburgh as well as London and held talks with the then prime minister Tony Blair at 10 Downing Street.

He was given a full ceremonial welcome in London at Horse Guards, attended by the Queen, the Duke of Edinburgh and the Prime Minister.

He was at a state banquet at Buckingham Palace hosted by the royal family and he also hosted a banquet for the Queen at Spencer House in St James’s.

During the trip, the Prince of Wales and Mr Putin were pictured by the media looking happy, relaxed and smiling at each other as if sharing a joke.

Charles visited Russia only a month later in July 2003 during a three-day visit to St Petersburg aimed at strengthening relations between Russia and Britain.

In 2014, Charles sparked a diplomatic crisis with Russia when he liked Mr Putin’s actions to some of those of the Nazis while speaking to a former Polish war refugee during a royal tour to Canada.