Skip to content
Home News William and Kate ‘benefitting from blood, tears and sweat of slaves’ 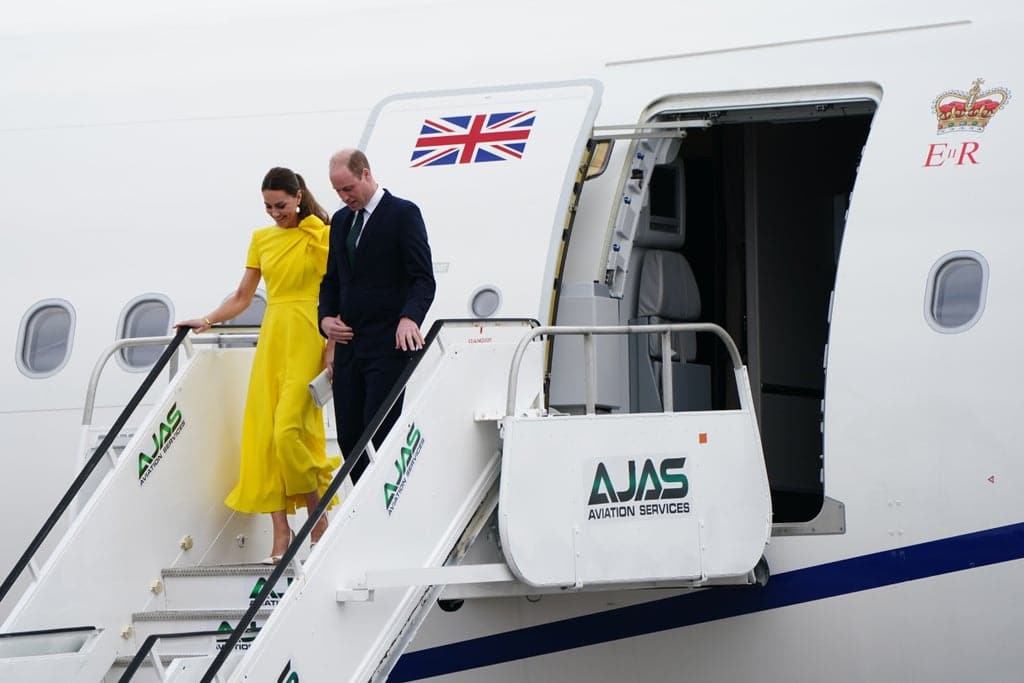 The Duke and Duchess of Cambridge have been accused of benefitting from the “blood, tears and sweat” of slaves as they arrived in Jamaica to be met by a protest calling for reparations from the British monarchy.

William and Kate will celebrate the culture and history of the island where there have been calls from politicians in recent years for Jamaica to drop the Queen as head of state and become a republic, and for a formal acknowledgment of slavery.

Anti-colonial sentiment has been growing across the Caribbean against the background of the Black Lives Matter movement, which has inspired many around the globe to campaign for equality.

Protesters gathered outside the British High Commission in Jamaican capital Kingston, with one placard held by a little girl reading: “Kings, Queens and Princesses and Princes belong in fairytales not in Jamaica!”

A royal source said the duke was aware of the protests and was expected to acknowledge the issue of slavery in a speech on Wednesday night during a dinner hosted by the Governor General of Jamaica.

Opal Adisa, a Jamaican human rights advocate who helped organize the demonstration, also called for an apology, saying: “Kate and William are beneficiaries, so they are, in fact, complicit because they are positioned to benefit specifically from our ancestors, and we ‘re not benefitting from our ancestors.

“The luxury and the lifestyle that they have had and that they continue to have, traipsing all over the world for free with no expense, that is a result of my great, great grandmother and grandfather, their blood and tears and sweat.”

The Advocates Network coalition of Jamaican politicians, business leaders, doctors and musicians wrote an open letter detailing 60 reasons why the monarchy should compensate Jamaica, to mark the country’s 60th anniversary of independence.

Ms Adisa said an apology would be the “first step towards healing and reconciliation”.

She added: “You know, we don’t have anything personally against Kate and Prince William, and even the Queen, for that matter, but we’re simply saying you’ve done wrong, and it is way past time that you admit that you’ve done wrong and when you do, redressing it.”

In contrast to the angry scenes, the couple posted videos on social media of them diving in the waters off Belize among sharks following a private invitation by the country’s government to see conservation work to preserve the world’s second-largest barrier reef.

The footage was released a few hours before the couple arrived in Jamaica, where Mark Golding, the opposition leader, reportedly intends to tell the royals many Jamaicans want an apology from the monarchy for its role in transporting humans from Africa to the Caribbean.

As they stepped from the Voyager ministerial jet the couple received an official but warm welcome to Jamaica, but it was the blustery conditions that had the duchess clutching onto her flowing dress in case it was whipped up by gust.

While the duke took the salute from a guard of honor formed by Jamaica Defense Force troops, the duchess stood nearby under a marquee that shook in the wind as she held onto the hem of her yellow maxi-gown by Roxsana.

She laughed with a dignitary standing next to her as she battled the conditions ahead of their trip to Trench Town, the Kingston neighborhood where reggae great Bob Marley grew up.

The royal couple were the subject of protests in Belize. the first stop of their Caribbean tour, with opposition to a royal tour of a chocolate farm forcing the event to be canceled and hastily arranged at another site.

Mr Golding has been invited to a royal event in his St Andrew South constituency and the Governor Generals’ dinner where William will give his speech.

He told The Gleaner, a national Jamaican newspaper: “I would hope that I get the opportunity during the events that I will be attending to have that dialogue with them and to bring it to their attention in a courteous and respectful way that this is the view held by many Jamaicans.”

The leader of the People’s National Party added: “And that I think it would be helpful both to the Royal family and Jamaica for them to consider this as a means of starting to move forward to a new future.”

The Prince of Wales addressed the “appalling atrocity of slavery”, describing it as something “which forever stains our history” last November when he attended the ceremony marking Barbados’ historic transition to a republic.

The British royal family were involved in the transportation and selling of people for profit for centuries with Elizabeth I becoming involved in the lucrative dealings of John Hawkins, one of Britain’s first slave traders in the 16th century.

When his first adventure proved successful and his ships returned laden with goods she supported his future expeditions by providing vessels to carry the human cargo.

The connections between the royal family and slavery continued with Charles II who encouraged the expansion of the slave trade.

I have granted a charter to a group of men, the Royal Adventurers, who later became the Royal African Company and the monarch and the Duke of York invested their private funds in the venture.