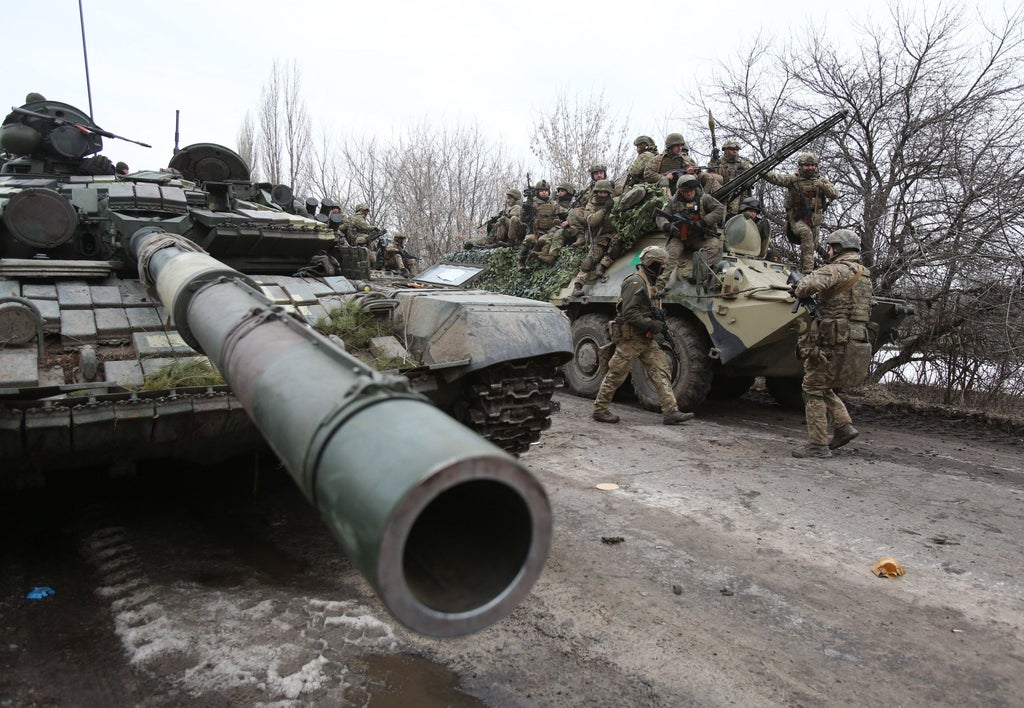 In the weeks leading up to Russia’s invasion last night – and as the Kremlin’s cruise missiles began to rain Ukrainian military targets – footage flooded social media claiming to depict the horror of war in real time.

Much of it was filmed by ordinary citizens in Ukraine and the border regions of Russia, Belarus and annexed Crimea; aghast at the columns of tanks and equipment by their homes, explosions in the distance, and dog fights between fighter jets above their roofs.

But some of that footage was misattributed, misappropriated or just plain made up; as Moscow attempted to create and maintain a pretext for its unprovoked invasion of a peaceful Ukraine. Just as social media is part of modern life, disinformation is part of modern conflict – and it’s up to each of us to make sure we aren’t unwittingly playing a hand in amplifying it.

Before Putin declared war – what he is calling a “special military operation” to “demilitarize and de-Nazify” Ukraine, another little bit of narrative gymnastics meant to make uninformed observers think he is up to something less nefarious than an all-out, unwarranted invasion – Kremlin media and Russian proxies in Donetsk and Luhansk shared a raft of poorly-staged fakes that claimed Ukraine was launching unprecedented, aggressive attacks against the Donbas region.

Russian proxies shelled a kindergarten in Ukrainian-controlled territory and claimed Ukraine had shelled its own citizens, despite evidence from the artillery crater that meant the shell had come from over the contact line. They claimed Ukraine carried out an attack via improvised explosive device, but in the wreckage of the vehicle displayed in a video of the alleged scene of the crime, showed human remains that clearly showed signs of having undergone a postmortem autopsy.

The leaders of the so-called Donetsk and Luhansk People’s Republics released videos ordering an evacuation of civilians due to an “imminent” threat; the threat was apparently so urgent they recorded the videos days prior to their current release, according to the metadata on the files. All signs point to the Russian authorities’ desire to create a pretext for a ruthless and unnecessary invasion.

The fakery hasn’t stopped in the hours since Russian troops and weaponry trained their sights on Ukraine. At the Center for Information Resilience (CIR), an independent UK social enterprise that identifies, counters and exposes disinformation, we have already seen footage from the civil war in Syria attributed to today’s violence in Ukraine.

And there’s plenty more where that came from; Russia has been known to share video game footage in place of real satellite images, as well as misattribute photos and videos from the first eight years of its aggression in Ukraine, or even the Balkan conflicts of the 1990s, to claim atrocities that have not occurred . We expect to see more fakes and manipulation as the war progresses.

While it is tempting while sitting safe at home to think that sharing information about events in Ukraine as they happen will do some good – to inform, to support, to express outrage – it’s important we hold our social media fire.

Sharing unconfirmed videos and photos can inflame tensions and endanger lives. It can unwittingly support the false narratives that Russia has tried to sloppily spin – that Ukraine is an aggressor and has no right to exist. And it can contribute to increased distrust in media and institutions that fuels so much disinformation today.

So, as an ordinary citizen following the conflict, what can you do? Follow reputable sources, especially media organizations with reporters on the ground in Ukraine. Look for confirmation from the open source community that the footage you’re looking at has actually occurred before sharing it – at CIR we are geolocating and verifying content like this every day, and posting it to an open source map.

In the absence of those resources, do a little digging and consider the source – did the content originate from a partisan actor, an expert, a citizen on the ground? Does it seem authentic or too good to be true? If you do a reverse image search, does it seem the content has come from another source, or is it original?

The war in Ukraine will be one of the most digital conflicts we’ve ever seen. With a little caution, we can ensure we’re not unwitting combatants.

Nina Jankowicz is the author of How to Lose the Information War, a senior adviser at the Center for Information Resilienceand a global fellow at the Wilson Center in Washington DC