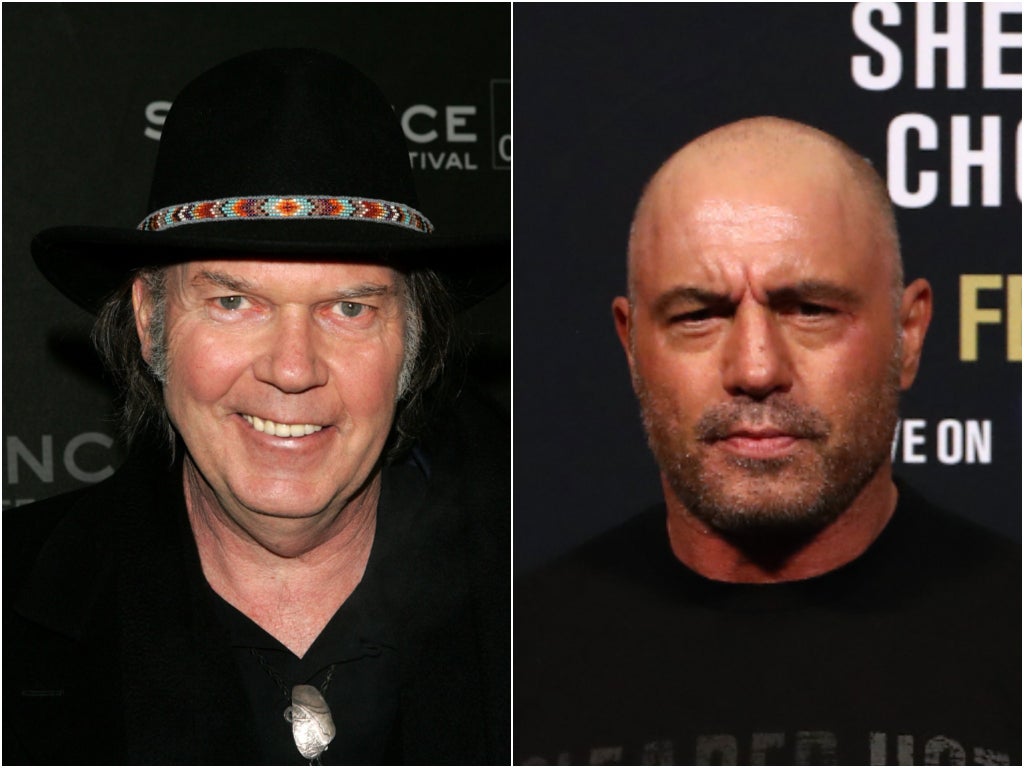 In one corner was Joe Rogan, the comedian and former “Fear Factor” host turned provocative podcaster.

At the other was Neil Young, the multi-Grammy award-winning rock legend with a lifelong passion for progressive causes.

The battle lasted two days and Rogan won without flinching.

Young started the fight when he posted a letter on his website on Monday, addressed to his manager and a record label executive, demanding that his music catalog be removed from Spotify in response to “false information about vaccinations.”

Specifically, Young quoted Joe Rogan, who hosts “The Joe Rogan Experience” podcast, as suggesting that healthy young people should not be vaccinated. After contracting the coronavirus, Rogan also praised ivermectin, a drug used to kill parasites in animals and humans that has no proven antiviral benefits. “I want you to let Spotify know immediately TODAY that I want all my music off their platform,” he wrote. “They can have Rogan or Young. Not both.”

Two days later, without a word from Rogan, Spotify began the process of removing the famous rocker’s music, including his best-known hits like “Heart of Gold,” “Harvest Moon” and “Rockin’ in the Free World.”

The speed of Spotify’s decision to drop Young was jarring. So why did the company do it?

The answer is simple: this is not really a story about Rogan or Young. It’s a story about Spotify. And, despite public perception, Spotify is not a music company. It is a technology company that seeks to maximize profits.

The company hasn’t been shy about its desire: In 2019, Spotify announced it planned to spend up to $500 million to acquire companies “in the emerging podcast market.”

That year he bought Gimlet Media, home to podcasts like “Reply All,” “Homecoming” and “Where Should We Begin? With Esther Perel,” for an estimated $230 million. He also spent more than $100 million on Anchor. , a platform that allows users to create and share their own podcasts.

The following year, Spotify spent nearly $200 million to acquire Ringer and its founder’s suite of popular podcasts, including “Binge Mode,” “The Press Box,” and “The Bill Simmons Podcast.” And of course, he reportedly spent over $100 million to acquire the exclusive rights to just one show: the wildly popular and rabble-rousing “Joe Rogan Experience.”

“I think it’s about business, frankly,” said John Simson, director of American University’s business and entertainment program. “On the musical side of things, [Spotify is] paying about 70 percent of all income coming in. It comes back as royalties. They are looking for other places where the revenue split is not as dramatic. . . . Podcasts were definitely her choice.”

The plan seems to be working. Spotify reportedly overtook Apple Podcasts last year to become the largest podcast provider in the United States.

As Spotify built its podcast empire, it has been increasingly criticized by musicians who use the platform. In December, rapper T-Pain tweeted a breakdown of how many streams it takes for a musician to earn $1 on various services, noting that Spotify takes 315 while Apple Music takes 128. Several months earlier, artists and music workers music industry, organized by the Musicians and Allied Workers Union, protested outside Spotify offices around the world, bringing petitions signed by more than 28,000 people demanding, among other things, higher payouts for artists.

“I don’t think any of these platforms are music companies that really care about music. I think of them as tech companies,” said Gabriel Teodros, a Seattle-based hip-hop artist who wrote a viral Substack blog in December titled “No Money in Streaming.”

Still, Teodros said he was surprised at how “quickly” Spotify decided to remove Young’s music, rather than Rogan’s podcast. “I thought it might be a long, drawn-out thing.”

Other big-name artists have also fallen out with Spotify: Taylor Swift pulled her music from the platform until she met their demands, but none seemed to spark widespread change. That leaves Teodros wondering if Young’s protest “will be a moment where public perception of public streaming platforms is altered forever, or is it just a blip?”

Young has received an outpouring of support from across the political and social spectrum: “I’m with #NeilYoung,” Geraldo Rivera tweeted. Hoping all musicians will step up and support Neil Young. Where are you?” tweeted author Don Winslow.

Not that leaving Young won’t cause any pain on Spotify. Most of her music is over 18 months old and older tunes have become popular during the pandemic.

So it should come as no surprise that the day after Spotify announced the removal of Young’s catalog, SiriusXM said it would reactivate “Neil Young Radio,” a channel dedicated to Young’s music and storytelling, for a brief period.

“When you have the chance to feature an iconic artist who is still at the height of their creativity, don’t hesitate to do it again,” said Steve Blatter, the company’s senior vice president and general manager of music programming, pointedly. cheeky statement. “Outspoken, fearless and a true music icon, Neil Young is in a rare class of artists, and we are honored to collaborate with him to create a special audio experience for his fans.”

Young’s plea to other musicians

“I sincerely hope that other artists and record companies will leave the SPOTIFY platform and stop supporting SPOTIFY’s deadly COVID misinformation,” Young wrote on his blog Wednesday.

It remains to be seen if anyone will follow. Many of the artists who could pick up their battle cry — old rock statesmen with catalogs big enough to hurt the streaming service — no longer own their own music.

In most of these cases, the artist sold both the copyright to the release and the recording. That means that unless they have a special clause about how their music is used, they have no power to dictate where their tunes appear. And Simson, the American University professor, said such clauses are rare. “The reason [these companies] are paying all that money is that these streaming services are increasing the value” of those catalogs.

In his blog post, Young wrote that removing his music from Spotify will equate to “losing 60% of my worldwide streaming revenue.”

So while other artists, particularly his contemporaries, joining the legend and taking their music off the shelf might sound like a good rock and roll idea, it probably won’t happen.

Is losing an artist enough to force Spotify to change?

If one or two of them took their music out, how many of Spotify’s 172 million subscribers would actually delete their accounts? How many of its 381 million monthly users would stop listening?

“Spotify probably has the inertia aspect. Once you’re on a particular streaming platform, you’re likely to stay there because you have your playlists, you’re familiar with them,” Simson said. “It’s scary having to move all of a sudden.”

And those are just the best artists. What about everyone else? As Eve 6 frontman Max Collins sarcastically tweeted, “If Spotify doesn’t take Neil Young seriously, I bet they’ll heed Eve6’s demands.”

See also  Louis Garrel: "I'm a bit of a fool, a reactionary who doesn't realize he is" | Culture | ICON

Now consider that Rogan has an estimated 11 million listeners per episode. He typically posts four to five of them each week, often lasting more than three hours.

When Spotify bought Rogan’s podcast, Stephanie Liu, an analyst at research firm Forrester, told the New York Times: “This is part of Spotify’s bigger bet on podcasts. Spotify is buying not only Joe Rogan’s extensive future content library, but also his loyal audience.”

To retain that audience, they need Rogan. In addition, and this is key, it is exclusive to Spotify. Very few musical artists are. Neil Young’s albums are on Amazon, Apple, and various other services. Rogan’s library is only on Spotify. You don’t need Spotify to listen to Young, but you do need it to listen to Rogan.

The power of Joe Rogan

“If podcasting is Spotify’s biggest strategic bet, then Joe Rogan is the biggest part of that,” said Tatiana Cirisano, a music industry analyst and consultant at MIDiA Research. “Other podcasters might be looking at this and wondering, ‘Is Spotify safe for what I mean?’ “

He added that while Rogan’s audience may be large, it is also limited. His audience is young and male. He plays the role of provocateur, beholden to no political belief system. While that obviously appeals to fans of him, those who disagree with him are unlikely to be tuning in.

Losing an artist doesn’t necessarily mean losing all of that artist’s fans. But if she loses Rogan, her listeners are unlikely to switch to the Michelle Obama podcast, which is also on Spotify.

Cirisano said that this could be a “turning point” for Spotify and that Young had forced them to choose between two influential talents.

However, he doubts Young’s move will convince many people to leave Spotify.

“I think people have a hard time switching platforms,” ​​Cirisano said. “I’m not sure if anyone other than the top 1 percent of Neil Young’s fans is going to do that.