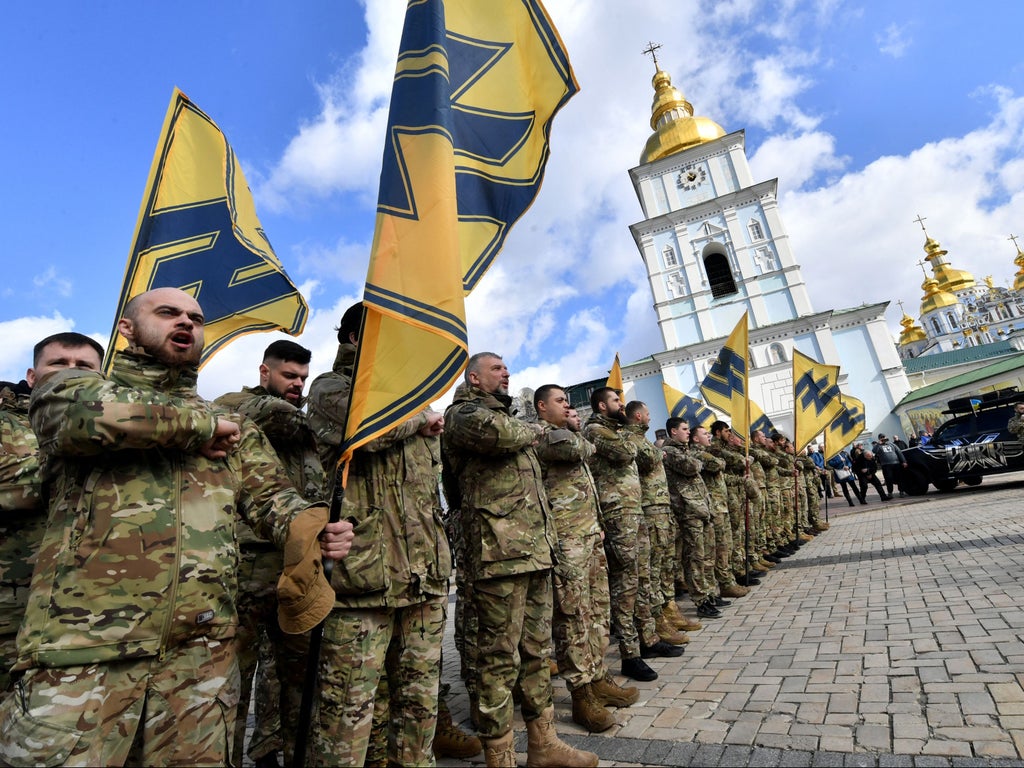 In justifying his invasion of Ukraine last month, Russian president Vladimir Putin told his citizens the war was a “special military operation” intended to “demilitarize and de-Nazify” the neighboring state and to protect pro-Russia separatists in the east of the country from genocide.

Accusing Ukrainian president Volodymyr Zelensky, a Jew who lost family members in the Holocaust, of presiding over a “Nazi” government is an astonishing allegation and Ukraine was quick to file a lawsuit with the International Court of Justice (ICJ) arguing that Mr Putin was misusing the word “genocide”, coined by Polish lawyer Raphael Lemkin in 1944 with a view to prosecuting the atrocities of the Third Reich, as a bogus pretext for his attack.

The ICJ agreed and ruled on 16 March that Moscow must immediately cease its military operation, an order that has so far been dismissed and ignored by the aggressor.

Despite denying intentionally targeting Ukrainian citizens in its shelling campaigns, Russia has already been accused of war crimes over the conduct of its military during the first month of the conflict, which has been seen indiscriminately bomb maternity hospitals, children’s nurseries, residential apartment blocks, a theater being used as a shelter and even a Holocaust memorial to the 33,771 Jews massacred at Babi Yar in September 1941.

Rape, torture and murder have also been alleged as cities like Kharkiv and Mariupol are beaten into submission with brutal siege warfare tactics.

Mr Zelensky made his own thoughts clear about what is taking place in his country when he has addressed the Israeli parliament recently, telling its lawmakers that Mr Putin is attempting to carry out a “permanent solution”, explicitly likening his methods to the Nazi extermination campaign that led to the mass murder of six million European Jews in its concentration camps.

Of the missile attack on the Babi Yar memorial, he told his audience in The Knesset: “You know what this place means, where the victims of the Holocaust are buried.”

Russia’s actions over the last month have meanwhile begun to inspire anti-Semitic hate crimes abroad, with North Yorkshire Police launching an appeal for information after gravestones in a Ripon cemetery were desecrated with swastikas and the distinctly fascist “Z” symbol associated with Russian troops and support for the war.

For all of that, it should also be observed that Ukraine is not entirely free from the stain of neo-Nazism either.

The basis for Mr Putin’s allegation against Mr Zelensky’s government in Kyiv appears to be the role of a notorious far-right militant group known as the Azov Battalion in the fighting that has raged in the Donbas regions around Donetsk and Luhansk since the Maidan protests and Russia’s annexation of Crimea in 2014.

The group began life as a volunteer force in May that year after Ukraine’s then-minister of internal affairs, Arsen Avakov, authorized the creation of new paramilitary organizations of no more than 12,000 members to battle the rebel fighters.

It was organized by Andriy Biletsky, a white supermacist former football hooligan associated with the FC Metalist Kharkiv ultras, known as Sect 82, who went on to help lead the Patriot of Ukraine and Social National Assembly far-right groups.

Known as “Bely Vozd” (White Ruler) by his supporters, Mr Biletsky has written: “The historic mission of our nation in this critical moment is to lead the white races of the world in a final crusade for their survival. A crusade against the Semite-led untermenschen [inferior races].”

His unit, fit and well-equipped, first saw combat in the recapture of Mariupol in June 2014, the success of which saw the port city become its base, undoubtedly one reason Russian forces have placed so much emphasis on securing it during recent weeks, bombing more than 80 per cent of its buildings, cutting off all electricity, water, heating and lines of communication and leaving corpses unburied in the streets.

According to Deutsche Wellethe 900 or so current members of the Azov Battalion have again been instrumental in the defense of Mariupol this month, the new war apparently giving the unit a fresh lease of life.

Following its victories in Mariupol and Marinka in the summer of 2014, the battalion – known for wearing black fatigues, sporting Nazi tattoos and going into battle with swastikas drawn on its helmets – was officially absorbed into the Ukrainian National Guard in November of that year, soon becoming a regiment.

“These are our best warriors,” former president Petro Poroshenko said at an awards ceremony as he presented Mr Biletsky with a medal. “Our best volunteers.”

Having fought under an explicitly Nazi symbol – a tilted version of the Wolfsangel, borrowed from the Third Reich’s 2nd SS Panzer Division Das Reich, which the group has insisted is simply an “N” and an “I” to stand for “National Idea” – the regiment was always highly controversial and has been accused by the Office of the United Nations High Commissioner for Human Rights of engaging in war crimes including torture, looting and unlawful detention and by others of persecuting Ukraine’s Roma and LGBT+ communities.

In the present conflict, they have reportedly been ruthless enough to coat their bullets in pigs’ blood in the hope of causing maximum anguish to any Chechen Muslims soldiers they might happen to shoot.

In March 2015, Mr Avakov announced that he would receive specialist training from the US Army, only for that offer to be withdrawn in June when the group’s neo-Nazi connections became more widely known and the US House of Representatives moved to block them from benefiting from any American aid.

The unit was subsequently removed from frontline action in August 2015 and attempted to make a show of purging its ranks of political elements by channeling their energies into a far-right party instead, the National Corps, which was formed in October 2016 but has since fared poorly at the ballot box.

Exactly three years later, ongoing concerns over the Azov Battalion in the US prompted House Democrats to petition for it to be classified as a Foreign Terrorist Organisation, a request that provoked anger among nationalists in Ukraine proud of the unit’s defensive record.

The group has reportedly been successful in developing an English-language presence on social media, helping it to attract an extremist following across Europe and from as far afield as Brazil while also forging ties with white supremacist groups in the US, according to investigative website Bellingcat .

“Azov has achieved levels of mainstream media exposure far in excess of the group’s minimal electoral support,” Oleksiy Kuzmenko, a Washington, DC-based investigative reporter, said in a commentary for the Atlantic Council.

“The far-right in general, and their apparent impunity, have significantly damaged Ukraine’s international reputation and left the country vulnerable to hostile narratives exaggerating the role of extremist groups in Ukraine.”

It even sold merchandise like mugs and T-shirts on mainstream online retail sites until recently, when the stores concerned were alerted to their significance and had them removed.

While the Azov Battalion represents only a tiny fraction of the brave Ukrainian defense forces fighting Russia, their regional notoriety has enabled Mr Putin to put across a useful lie to “justify” his invasion of a free democratic nation.

Claims that Ukrainian oligarch Igor Kolomoisky, a gangster capitalist who allegedly once kept a shark tank in his office to intimidate rivals, has contributed funds to both the battalion’s coffers and to Mr Zelensky’s 2019 presidential campaign are perhaps indicative of the extent to which Kyiv has found itself forced to embrace the unit in spite of its politics, however reluctantly.