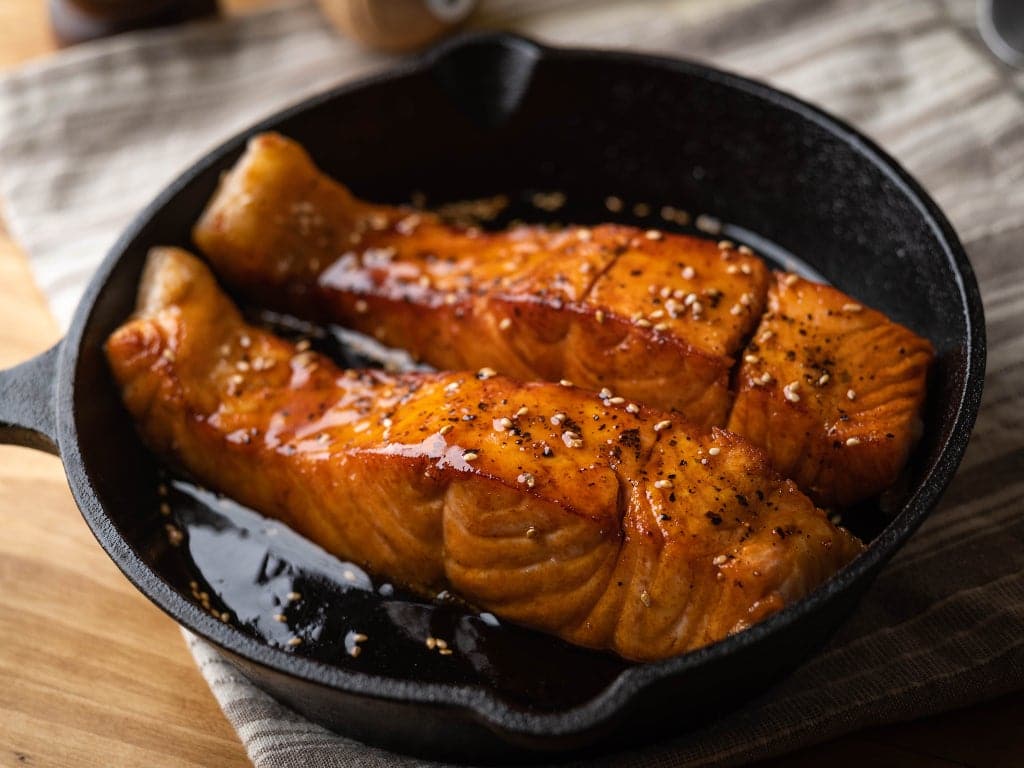 There’s a line of shops on a tree-lined road in Dublin, with O’Briens Wine in the centre, a butcher and grocer on either side and a minimart at the far end. Taken together, they have most everything you would need to prepare meals. I know, because I dragged my daughter into each store and examined every aisle.

I was dropping her off at college across the Atlantic, where she would have to cook for herself, and it was a relief to know groceries were a 10-minute walk from her flat (her twin sister stayed stateside, at a school with a meal plan).

I cook to feed, and I had been feeding my twins from the moment I found out I was pregnant with them, months later than I should have known and a decade earlier than planned. Eighteen years later, faced with the reality that I would no longer be feeding them daily, I still felt compelled to do so in whatever ways I could, starting with ingredient scouting and creating a new recipe.

This salmon and potatoes dish is inspired by my daughter’s new home in Ireland and designed to avoid making her ventless kitchen – or anyone’s kitchen – smell like a harbor on a muggy day. Instead of frying or searing the fish, which releases an intense scent, I came up with a stovetop method that’s faster than baking salmon but yields a similar silkiness.

The trick is to invert the usual steps of glazing salmon. Rather than swipe a finished sauce on top at the end like a final coat of nail polish, you cook the fish right in the mix from the start. A simple blend of whiskey, sugar and Worcestershire sauce thickens as it simmers and coats the pan as oil might, but doesn’t splatter. The bubbling liquid gently heats the fillet from the bottom up, infusing it with a savory sweetness without drying it out.

With this technique, the fish won’t end up with crispy skin. If there is skin, it peels off easily after cooking – the feeling is as satisfying as removing plastic protectors from new electronic devices. (I save the skins as treats for my dog. You can do the same, eat them yourself or discard them.)

Baby potatoes on the plate provide a contrast in textures, their buttercup-hued peels crackling with salt. Their snowdrift coating makes this dish look complex, but that delicate casing is easy to achieve. Based on wrinkled potatoes, wrinkly salt-crusted potatoes with mojo from the Canary Islands, these potatoes are boiled in generously salted water until tender, then shaken with a splash of the water left in the pot until it evaporates and the salt crystallises onto the spuds . The savory snap of the creamy rounds is just what you want against the subtle sweetness of the glazed fish.

My daughter hasn’t yet made this dish (“I’m busy, Ma”), and maybe she never will. But the compulsion to feed isn’t purely maternal – it’s the reason I cook professionally, too – and cooking to feed isn’t completely selfless. When putting together meals to solve the puzzles of another’s needs, I stretch in creativity and gain knowledge I hadn’t been seeking.

The very act of feeding, whether in plates shared at the dinner table, through recipes sent across an ocean or in other forms of providing sustenance, nourishes the giver as much as the receiver. When everything else feels out of control, there’s comfort in being able to care through food.

The savory snap of baby potatoes crusted in salt is just what you want with the subtle sweetness of this fish’s glaze. The fish and the potatoes cook and come together at the same time in this fast meal. To achieve silky salmon without turning on the oven, gently cook it in a shallow pool of sauce that thickens to a syrup as it simmers. The potatoes, prepared using a technique from the Canary Islands, simply boil in generously salted water, then finish cooking with a splash of the liquid. When it evaporates, the salt that remains crusts onto the spuds. Shaking the pan vigorously helps the salt coat the potatoes evenly and sheds excess crystals. Serve with a salad or, after the glaze is scraped onto the fish, throw baby spinach into the still-hot pan and stir to just wilt.

Make the potatoes: the potatoes should all be the same small size, about 1 inch in diameter, so cut any larger ones in halves or quarters. Place in a large saucepan with 4 cups of water and add the salt. Bring to boil over high heat, then continue boiling until a paring knife slides through a potato easily, about 15 minutes.

About 5 minutes before the potatoes are tender, start the salmon: combine the sugar, whiskey and Worcestershire sauce in a large frying pan, and bring to a boil over medium-high heat, stirring to dissolve the sugar. Season the salmon with salt and pepper, then add to the pan skin side down (or the flat side if the fillets are skinless). Reduce the heat to medium-low and simmer until the salmon becomes opaque about halfway up the sides, about 5 minutes.

Flip the salmon and continue cooking until just opaque from top to bottom and a paring knife slides through with almost no resistance, about 5 minutes longer. If you started with a 3-centimetre-thick fillet, this will be medium-rare. The timing will vary depending on the thickness of your fish and your preferred doneness. If you’d like, use tongs to peel off and discard the skin if there is any. The glaze should have thickened and be syrupy.

Divide the potatoes and salmon among serving plates and drizzle any glaze from the pan over the fish.