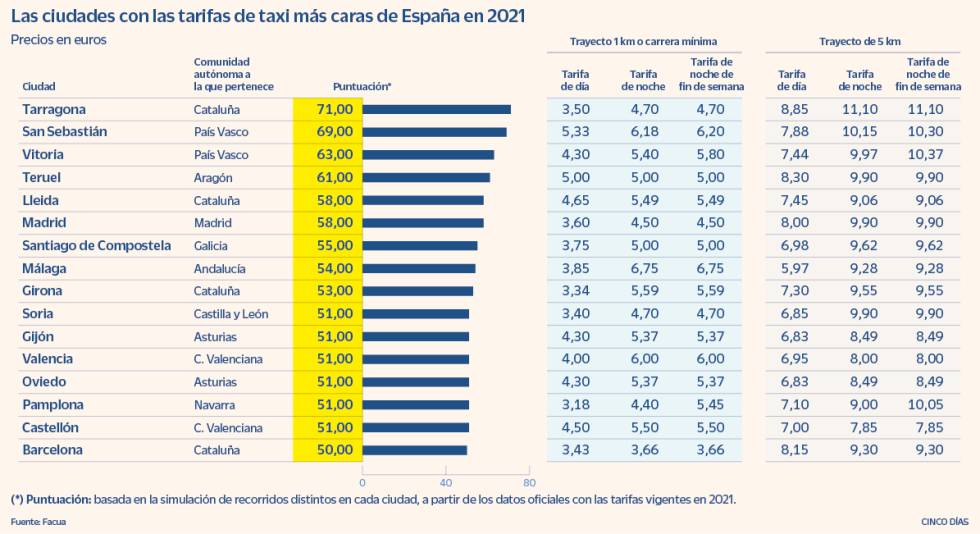 Catalonia is the community in which it is most expensive to take a taxi; three of the 10 cities with the highest rates are concentrated here. These are Tarragona, Lleida and Girona, which occupy the position number one, five and eight on the list, respectively. This is how it stands out from the comparative study that Facua has presented this Monday, in which it analyzes the prices of this type of public transport in 56 Spanish towns.

With 71 points out of 90, Tarragona is for the sixth consecutive year the most expensive city in Spain to take a taxi. At the other extreme is Las Palmas de Gran Canarias; that with only two points is positioned as the cheapest place to use this service. The Basque Country, on the other hand, not only has the third and fourth most prohibitive cities (San Sebastián and Vitoria), it also takes the prize for the most expensive minimum daytime rate: 5.33 euros.

The consumer association warns that the systems used in different cities to calculate taxi service rates are very different. Different calculations are applied to define night and holiday prices and not all of them have the flag drop, which is the price it costs simply to hail a taxi to use their services. In this last consideration appear the three capitals of the Basque provinces (Bilbao, San Sebastián and Vitoria), Lleida, Santa Cruz de Tenerife and the Galician cities Santiago de Compostela and Vigo.

The prices are so different that the cost per one-kilometer journey at night is 225% more expensive between the cheapest and the most unaffordable cities: Las Palmas and Malaga, where the fare is 3 and 6.75 euros, respectively. . Given the differences, Facua has simulated, as every year, nine different routes – of one, five and 10 kilometers by day, night and holidays – in all the cities analyzed and has assigned a score to each of them to be able to prepare the comparison . Based on this analysis, the average cost of the nine routes in Tarragona would cost 73.7% more than it would in the capital of Gran Canarias.

In general, northern cities tend to have more expensive rates. Teruel, Santiago de Compostela, Gijón, Oviedo, Pamplona and Catalonia are some of the 15 most prohibitive cities to take a taxi, although Madrid, Valencia and Malaga slip through. The southern towns and the autonomous cities, in opposition, have the cheapest rates. After Las Palmas are Ceuta, Huelva, Cádiz, Jaén and Melilla. In all these places, the price of the minimum race is below the national average of 3.67 euros.

In the middle of the year of economic recovery after the pandemic, less than 30% of the municipalities analyzed increased their prices. In total, 16 cities raised their rates. On average, the price per kilometer has increased by 0.4% during daylight hours and by 0.3% during night hours, which leaves the average price per kilometer at 0.94 euros and 1.16 euros , respectively.

The greatest increases, considering the three routes analyzed by the association, have occurred in Ciudad Real (4.2%), Almería (2.3%) and Pontevedra (1.8%). If analyzed by routes, the largest increase in the price of the minimum race has occurred this year in Ávila and Segovia, where it has risen by 5.7% in daytime hours to stand at 3.70 euros. The rise in the price per kilometer influences what it costs the user to take a taxi. In this category, Ciudad Real is the town with the most pronounced increase: 5%, from 1 euro to 1.05 euros.

As in other years, the consumer association has demanded that taxi fares stop including supplements or fixed prices for routes to or from places such as bus stations, trains, ports or airports, since there is no a change in the provision of the service that justifies the increase. On the contrary, being areas with a large influx, the existence of unjustified supplements is detrimental to users. The same occurs with special rates during certain weekend hours, either through a supplement or with a specific rate. The case of Cáceres and Mérida stands out, where the price of using a taxi at night on Saturday and Sunday is different from that of the week.