Skip to content
Home News What weaponry is Russia using in the war on Ukraine? 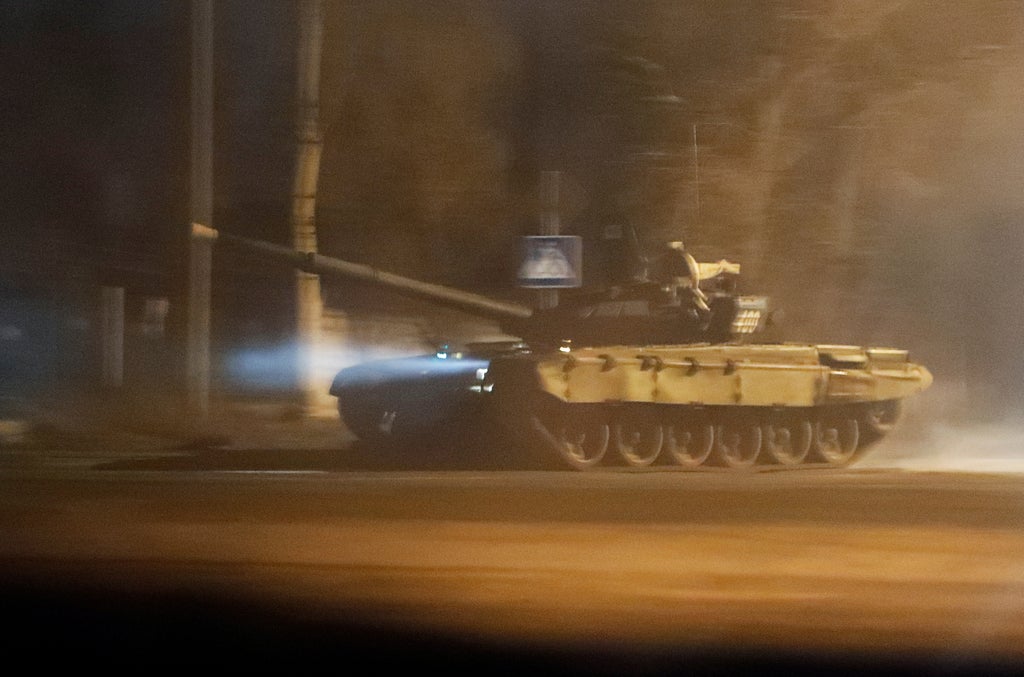 Russian forces have been attempting to storm Kyiv and several other major cities in Ukraine as part of an offensive taking place “in all directions”.

Western analysts said that the Russian army was experiencing unexpected difficulties, with the Ministry of Defense claiming the invasion was being ‘frustrated’ by strong resistance from Ukranians.

But as the war entered day five Vladimir Putin demonstrated he was prepared to escalate his use of deadly force, with reports of cluster bombs in the city of Kharkiv.

Russia is widely believed to have the largest nuclear arsenal in the world but the country has many other devastating weapons it can deploy, some of which it appears to have used already.

Below we look at the weapons at Putin’s disposal, as the war in Ukraine continues.

Among the weapons which have been seen moving towards the capital are TOS-1 thermobaric launchers; BM-21 122mm Grad; BM-21 220mm Uragan and 300mm Smerch systems.

Thermobaric weapons are considered to be one of the most brutal war weapons that exist.

The missiles are filled with a highly explosive fuel and chemical mix, which on exploding can cause supersonic blast waves that can obliterate everything in their path, including buildings and humans.

They are also known as aerosol bombs or vacuum bombs because they suck in the oxygen from the surrounding air to generate a powerful explosion.

The Ukrainian ambassador to the US said thermobaric launchers had been used during the invasion.

Peter Lee, of the University of Portsmouth, explained how these bombs work in gross detail in 2016, after Russia allegedly used them in Syria.

“Imagine taking a deep breath then submerging yourself in water,” he wrote. “Then imagine having all of the oxygen forced instantly from your body.

“Try to inhale again. But instead of cold water filling your lungs, toxic, flammable particles start killing you from the inside out.”

In 2000, Human Rights Watch condemned Russia’s reported use of the weapons a year earlier in Chechnya as “a dangerous escalation” with “important humanitarian implications”.

The Russian military has also been accused of using cluster bombs in an attack that killed a child and two adults hiding in a pre-school in northeastern Ukraine.

Human Rights Watch said it has also identified examples of cluster ammunition use.

On Friday, it said a cluster bomb had been used the day before by the Russian military in the town of Vuhledar.

Four civilians were killed in the attack, the organization said.

Human Rights Watch describes the weapon as posing “an immediate threat to civilians during conflict by randomly scattering submunitions or bomblets over a wide area”.

Bellingcat, a website specializing in investigations and verification, said on Sunday that it had located multiple sites in Ukraine where cluster munitions had been used.

It outlined two, at a pre-school in the city of Okhtyrka, and in Kharkiv, where it had verified social media reports of cluster munition attacks.

More than 100 countries have committed never to use the weapons under the Convention on Cluster Munitions, including the UK, but neither Russia nor Ukraine have signed the agreement.

Amnesty International has condemned Russia’s reported use of cluster munitions in Ukraine, saying an attack on a pre-school “may constitute a war crime”.

Although Vladimir Putin put Russia’s strategic nuclear deterrent forces on high alert, such extreme measures have not been used so far.

Instead Russia has deployed some “dual-capable” vehicles that could theoretically launch nuclear weapons near Ukraine but there are no signs on the ground the country has actually deployed nuclear weapons or nuclear custodial units, according to the group. And Russia itself has not announced any plans to use nuclear weapons.

Although reports on the number of nuclear weapons in Russia’s arsenal vary, it is believed they have around 6200 warheads.

Of those some 1,588 of which are deployed on ballistic missiles and heavy bomber bases, with another roughly 977 strategic warheads and 1,912 nonstrategic warheads in reserve, according to the Bulletin of the Atomic Scientists.

Russian military have been using an array of aircraft in its attack on Ukraine. Their plans are capable of firing guided air-to-ground missiles or dropping cluster or fragmentation bombs.

A US defense official has said that early intelligence suggested that Russian military had been using 75 fixed-wing bomber planes to focus on striking the Ukrainian air defenses and ammunition stores.

Attack and transport helicopters, including the Mi-8, have also been used in the offensive on the capital Kyiv, the Ukrainian military have said.

They claimed on Saturday that a Russian transport plane carrying soldiers had been shot down.