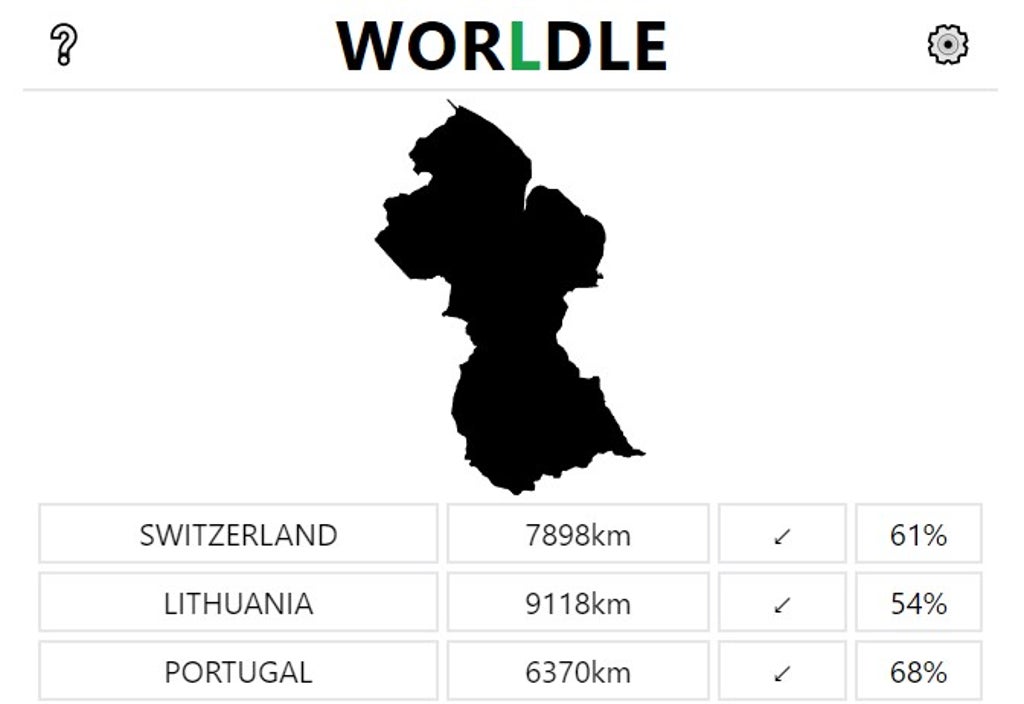 Know your countries, islands and borders inside out? You can now test that theory by playing Worldle, the latest in a string of spin-off games inspired by the daily word puzzle Wordle.

Rather than showing a number of letters for a word to guess, Worldle shows you a black shape representing a country somewhere across the globe.

Based on the shape and size, gamers must guess which country it is based on their knowledge of the world map.

If your guess is wrong, the game gives you a percentage of how “right” you are, plus the distance in kilometers that the real country is from the one you guessed – meaning you can get closer and closer within five guesses before your sixth and final try.

Geography and travel fans have been puzzling over the game since 27 January, when its French web developer creator, known only as Teuteuf, launched it as a bit of fun.

Half a million people played the game on Sunday, with its name trending on Twitter, the creator Antoine Teuf (@Teuteuf) reported earlier this week.

He gives a nod to the original format on the website, saying: “WORLDLE has been heavily inspired by Wordle, created by Josh Wardle.”

“A few weeks ago, I discovered the original Wordle and I instantly loved it,” Teuf told The Independent.

“I really appreciated how effective and simple it was, and love how it allows everybody to play together with a simple sharing of the result as a small text with emojis.

“That’s why I decided to do a geographical variant. After talking with my girlfriend about it, she reminded me of this old Facebook game called GeoChallenge where you had to guess a country by its shape.

“I made the game in just a few days.”

He was astonished when, after a few weeks, its daily players reached 1,000. Now those numbers are in the hundreds of thousands.

It’s not the only geography quiz to take a leaf out of Wordle’s book – another daily map guessing game, Globle, launched on 30 January with a slightly more complex format.

This time, you guess a country to start the game, and your chosen country appears in a color ranging from pale pink to red to show how close it is to the country of the day.

Without the distances that World gives you, it’s much harder to get the right country in just a handful of guesses, but the game is much more visual.

Creator Abraham Train came up with Globle in mid-January as a project to test out his design and programming skills.

He says around 350,000 people are playing every day, and the number is growing.

“It’s inspired by Worldle, of course, and the geography games on Sporcle,” says Train, who is currently looking for web development work.

“I’ve heard nice things from all sorts of people, including travel fans, but the kindest feedback comes from geography teachers who want their students to play. I’m delighted to see the game being used in education; it means the world to me – pun intended.”

Social media users are sharing their delight and confusion at both games daily.

“After 13 guesses I had to consult a map and it STILL took two more guesses!” marveled Globe user Brent Black on Twitter.