Skip to content
Home News What is the secret right-wing group funding the US truckers? 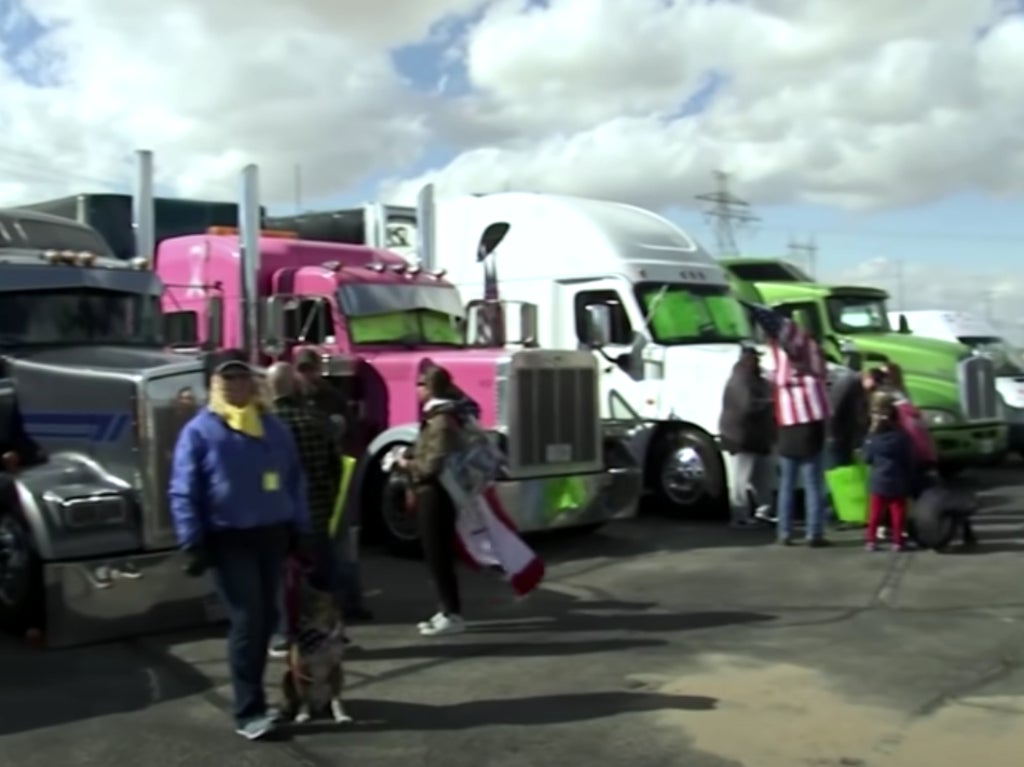 An American version of Canada’s “Freedom Convoy” was on the road and headed for Washington DC. While the group claims it’s a grassroots movement born from everyday people’s resistance to coronavirus vaccine and masking mandates, it appears it is receiving dark-money funding from a conservative organization.

The group bankrolling the pugnacious truckers is the American Foundation for Civil Liberties and Freedoms, with partners including QAnon conspiracy theorist General Mike Flynn and Dr Aaron Kheriaty, a professor who was fired from University of California Irvine for refusing to take the coronavirus vaccine and who has suggested Canada should face sanctions for its crackdown on protesters.

According to an exhaustive report published at TheDailyBeastthe group has raised $464,731 to fund the “People’s Convoy”, a US group inspired by the Canadian trucker protest that shut down border crossings and clogged Ottawa streets for nearly a month. The money the AFCLF will pour into the convoy will likely increase as the truckers make their way across the country.

According to the AFCLF, all of the donations will go to supporting the convoy, though it’s unclear exactly how that process will work. The group says the funds will “reimburse fuel and hard costs of the trucker,” and that the money is “being handled by volunteer accountants and overseen by a law firm.” Chris Marston, the chair of the AFCLF, told TheDailyBeast that the funds would not be used to cover the truckers’ return trips to their homes.

The AFCLF posits itself as a “trans-partisan” group, though all of its missions appear to be completely in line with MAGA talking points. The group questions the legitimacy of the 2020 election, complains about the use of “critical race theory” in schools, and harps on cancel culture and vaccine mandates.

Despite its political agenda, the AFCLF is organized as a 501c3 non-profit, meaning all donations to the group – donations that allegedly will go to the trucker convoys protesting vaccine mandates and, more broadly, the entire Biden administration – are tax deductible.

The People’s Convoy, as it is being called, left Adelanto, California, on Wednesday, and is planning to arrive just outside of Washington DC on 5 March. Mr Marston has said the convoy is meant to be peaceful and said it would cooperate with local law enforcement and not enter central Washington DC. One convoy appeared to hit a snag when some California drivers disbanded during their journey.

The trucks will reportedly drive around the Beltway – which briefly crosses into DC – before departing. However, some members, like Bob Bulos of Pennsylvania, who organized his own leg of the convoy, have suggested he has intentions beyond simply showing up.

Mr Bulos told Fox5 DC that he wants the convoy to “shut down” the Beltway, comparing it to a “giant boa constrictor”.

However, shutting down the Beltway is a tall order. If he were to use trucks to try to block the lanes, the truckers would almost certainly be arrested and their trucks towed. To try to block up the beltway by driving, the trucks would have to stack across all four lanes of the the 64-mile Beltway, and would require thousands of trucks.

The trucks could theoretically drive slowly in all four lanes of traffic to create substantial traffic jams, but it is unlikely that the police would tolerate the intentional breaking of traffic laws by the truckers.

The People’s Convoy is not the only planned trucker’s convoy, though it appears to be the only one to actually have launched its project. Several convoys have been actively recruiting protestors to join their ranks, with many – but not all – aimed at Washington DC. Some convoys are local focused, intending to blockade state capitals instead.

If any of the convoys do decide to actually move into Washington DC proper, they won’t be doing so unapposed. The Pentagon approved for the deployment of 700 unarmed National Guard troops to protect the capital in the event protesters do enter the city.

The guardsmen will not be used for law enforcement activities, but will be used to help direct traffic in the event the trucks attempt to block off DC roads.

DC’s Metropolitan Police Department Chief Robert Contee said his department was monitoring the convoy activity and is planning its response.

“There will be disruptions to traffic, that kind of thing,” Mr Contee told NPR. “I think we need to be very candid with the public about what some of the expectations, based upon what we’ve seen in Ottawa, that we might see here in the District.”

DC Mayor Muriel Bowser said she would provide DC residents with instructions should the need arise.