Skip to content
Home News What is the ‘New World Order’ and why has Joe Biden caused uproar by using the phrase? 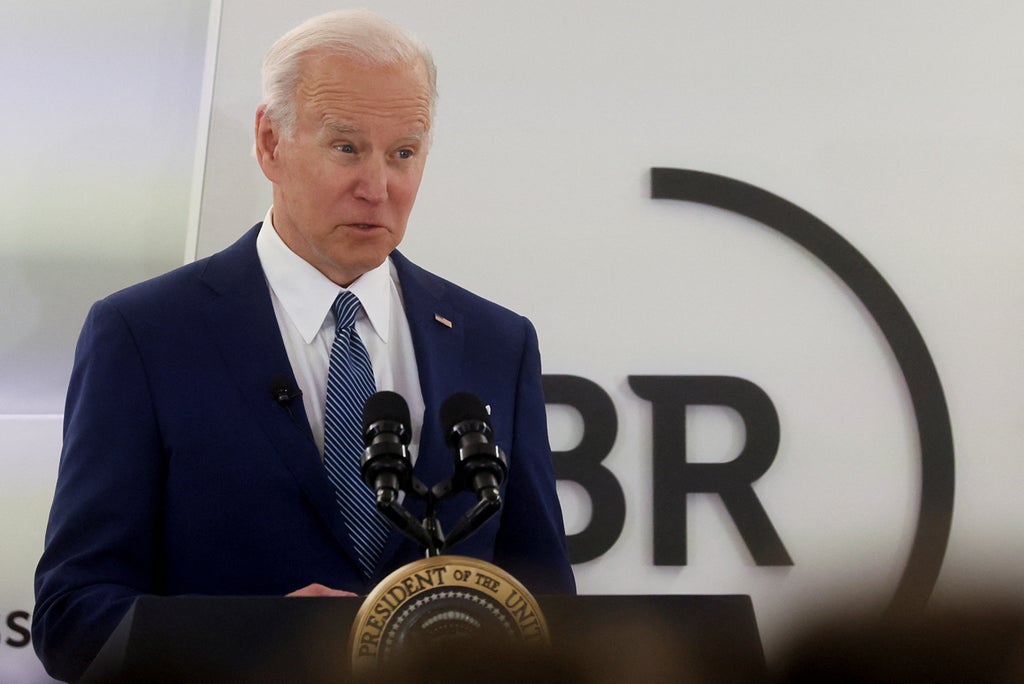 Joe Biden caused a stir on Monday during a gathering of business leaders at the White House when he alluded to a coming “new world order” in the wake of the Ukraine crisis, apparently not stopping to consider the awkward legacy of the phrase.

Addressing the Business Roundtable’s CEO Quarterly Meeting, which included the bosses of General Motors, Apple and Amazon, Mr Biden concluded his remarks by saying: “Now is a time when things are shifting. We’re going to – there’s going to be a new world order out there, and we’ve got to lead it. And we’ve got to unite the rest of the free world in doing it.”

The phrase quickly began trending on Twitter, with commentators wasting no time in gloating over what they saw as the president’s presumably accidental invocation of a well-worn conspiracy theory claiming that an elite globalist cabal operating from the shadows is plotting to carve up the world and impose totalitarian rule.

“I don’t want Joe Biden leading a line for Jello at a nursing home let alone the world,” one wrote on Twitter. “The nuts who brought us lockdowns creating ‘a New World Order’ is terrifying.”

“Did y’all forget everything we learned in those 2012 conspiracy videos?” said another. “Did y’all forget mass vaccination, mass surveillance (vaccine passports) & a total police state is apart [sic] of the New World Order.”

And so it went on. Another professed, apparently sincerely: “I believe with all my heart that Joe Biden was installed by Globalists, Babylon included, to usher in the New World Order.”

Anyone who took the trouble to listen to Mr Biden’s speech in full would have been left in no doubt that he was referring to the shifting sands of geopolitical relations in response to Vladimir Putin’s invasion of Ukraine last month.

The conflict has seen cities pulverized by savage siege warfare tactics, Ukrainians stage a courageous fightback and war crimes alleged as bombs rain down on maternity hospitals, children’s nurseries, shopping centres, a community theater and even a Holocaust memorial.

The international community has meanwhile moved to impose punitive economic sanctions against Russian businesses, banks, politicians and oligarchs the likes of which have never been seen before, shunning the country’s exports and energy as corporations cease operations, cutting it off commercially as well as diplomatically in the hope of forcing an end to the hostilities.

Mr Biden warned the CEOs assembled in Washington that Russia could retaliate with further cyberattacks against the west and use chemical weapons against Ukrainian civilians as the conflict morphs into a drawn-out war of attrition, rather than the swift conquest Mr Putin appears to have envisioned.

All of which means the balance of power between nations will inevitably be upended as the world seeks to reorder diplomatic relations to exclude the Kremlin – so long as Mr Putin remains in charge and his war against a free democratic nation continues unchecked, that is – which is clearly what the US president was referring to.

Historically, the phrase “New World Order” has been common currency and used in much the same way as Mr Biden by the likes of Woodrow Wilson and Sir Winston Churchill in the aftermath of the First and Second World Wars respectively and, more recently, by George HW Bush in response to the collapse of the Soviet Union.

See also  Who is Stephen House? Who Scots Deputy Met Commissioner is, why House quit Police Scotland in 2015 and Commissioner contenders

In an address to a joint session of Congress on 11 September 1990, the first President Bush delivered a speech actually entitled “Toward a New World Order” in which he directly quoted Mr Churchill.

“Until now, the world we’ve known has been a world divided – a world of barbed wire and concrete block, conflict and the Cold War,” he began.

“Now, we can see a new world coming into view. A world in which there is the genuine prospect of a new world order. In the words of Winston Churchill, a ‘world order’ in which ‘the principles of justice and fair play… protect the weak against the strong’. A world where the United Nations, freed from Cold War stalemate, is poised to fulfill the historic vision of its founders. A world in which freedom and respect for human rights find a home among all nations.”

However, the phrase has also been used in a much less optimistic sense, notably in promoting Red Scare fears over the spread of the “international communist conspiracy” in the 1950s, which culminated in Republican senator Joseph McCarthy’s shameful persecutions of the period.

That mood of post-war paranoia tapped into much more ancient social anxieties about the possibility of shadowy secret covens engaging in evil, which saw “witches” hunted, convicted and executed by Puritans in 17th century England, Scotland and America and fraternal organizations like the Freemasons accused of practicing Satanism.

The Illuminati, the model for all subsequent sinister behind-closed-doors cabals feared by conspiracy theorists – not least the adrenochrome-harvesting legion of demon Democrats allegedly operating out of Hillary Clinton’s favorite pizza parlor – traces its origins to the German Enlightenment of the 18th century.

Belief in such a group plotting insurrection to realize its “new world order” first gained real prominence in the US among anti-government extremists in the 1990s, according to the Anti-Defamation League (ADL).

“Conspiracists believe that a tyrannical, socialist ‘one-world’ conspiracy has already taken over most of the planet and schemes to eliminate the last bastion of freedom, the United States, with the help of collaborators within the government,” the ADL states.

“Through repressive measures, as well as manufactured crises such as terrorist attacks and pandemics, the globalist conspirators seek to eliminate dissent and to disarm Americans so that the ‘New World Order’ can move in and enslave them.”

The ADL says its adherents believe the conspirators one day plan to declare martial law in the US, confiscate firearms and round up dissenters into secret concentration camps.

The movement brings together American right-wing militant instincts with Christian fundamentalist doom prophecies – right-wing televangelist Pat Robertson wrote a best-selling book called The New World Order in 1991 warning against imaginary enemies – and has exploded over the last three decades in tandem with the growth of the internet, a feverish rumor mill of half-truths, political confusion and wilful bad faith interpretations at the best of times.

Conspiracy theories have now become a form of mass entertainment on social media, fueled by everything from The X-Files to Alex Jones and culminating in the choose-your-own-reality fringe fantasies of QAnon, whose zealots, bored in lockdown during the pandemic, blended ancient anti-Semitic smears with quest narrative mythologies and pop cultural borrowings to worrying ends.

Apparent gaffes like Mr Biden’s only provide further grist to the mill of those who choose to believe that lizard men in silk hoods congregate behind boardroom doors to consult with their puppet-master overlord, hell-bent on global domination and busy manipulating international events to achieve his villainous ends.