Skip to content
Home News What does poor rating for collapsed bridge mean for others? 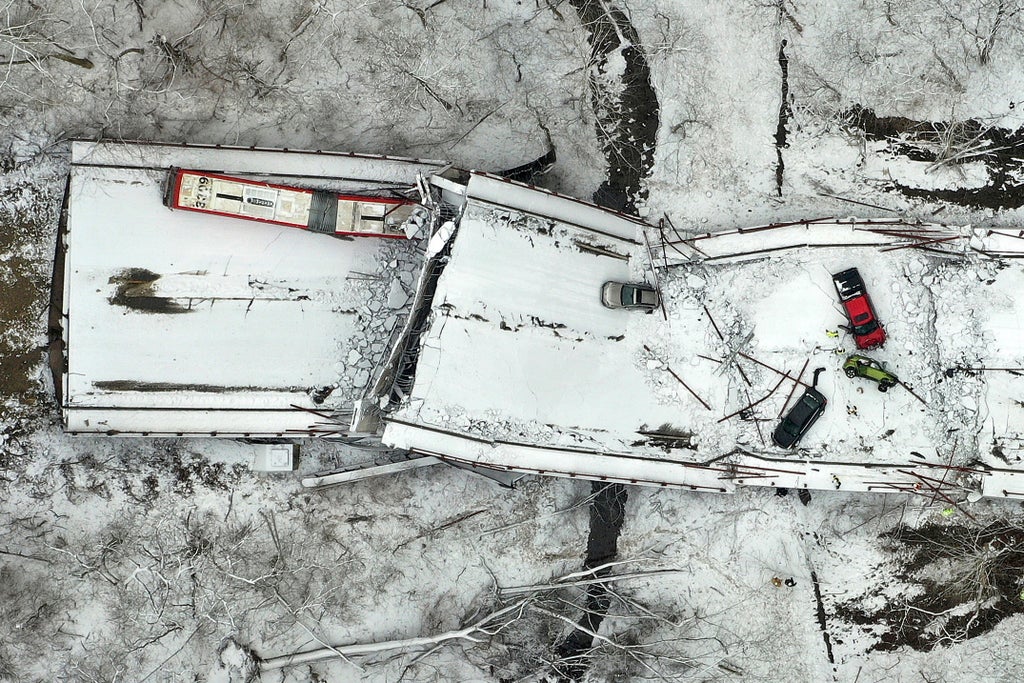 A 50-year-old bridge that collapsed in Pittsburgh had been rated as poor on a recent inspection report, but transportation officials and engineering experts cautioned that it doesn’t necessarily signal imminent danger for the thousands of other US bridges with the same designation.

Investigators from the National Transportation Safety Board and the Federal Highway Administration have been combing through rubble from the early Friday collapse of the Forbes Avenue Bridge looking for what caused it.

President Joe Biden who was in Pittsburgh on Friday to promote a $1 trillion infrastructure law, said it was miraculous that there were no fatalities and that only a few people were injured.

City officials said the most recent inspection report of the city-owned steel bridge since September wasn’t available Friday. But a September 2019 inspection showed the bridge’s deck and superstructure were in what inspectors said was poor condition.

Infrastructure spending advocates noted there are thousands of bridges across the country with the same poor designation but few instances of collapse. Many said funding has not kept up with the need for repairs and replacements.

HOW DO BRIDGE INSPECTIONS WORK?

The Federal Highway Administration’s bridge inspection program was developed after the 1967 Silver Bridge collapse in West Virginia which killed 46 people. It has expanded over the years to include state- and municipally owned bridges, not just those in the federal highway system, and to include rules for underwater inspections and regulations for qualifications of inspectors.

Generally, bridges are inspected every two years, with some older or lower-rated bridges inspected more often.

The municipal or state entities that own and maintain the bridges submit those inspection reports to state departments of transportation, which are required to provide them to the Federal Highway Administration.

WHAT DOES A POOR DESIGNATION MEAN?

Inspectors, who are trained engineers, largely perform detailed visual inspections of the three major structures of a bridge — the deck on which vehicles drive, the structure that carries the deck, and the substructure or culverts that hold up that superstructure. Other inspection methods are used underwater or when needed to determine whether corrosion has affected the weight a bridge can carry.

If any of the three structures of a bridge is rated 4 or below on a 9-point scale, the bridge is rated as poor, said Andy Herrmann, past president of the American Society of Civil Engineers.

“A poor rating doesn’t mean bridges are unsafe, it just means one of those components are rated at that level,” Herrmann said. “It’s a rigorous system, and frankly the federal system is what gives me confidence in the safety of our bridge infrastructure.”

New bridges are rated 9, and bridges with minimal or no wear are rated 7 or 8. Bridges considered in what the federal program deems fair or satisfactory condition — some signs of deterioration or minor loss or cracking — are rated 5 or 6.

When a bridge reaches a 4 rating, it means there is advanced deterioration or section loss, but the primary structural components are still sound. A 3 rating means those structural components are starting to see deterioration, and a 2 or 1 rating means there are critical issues or an imminent failure of the structure is possible.

WHAT HAPPENS AFTER A BRIDGE IS RATED POOR?

One of the inspection program’s goals was to create a system that could identify deterioration that could be repaired before a bridge needed replacement.

Sometimes the deterioration is minor enough that the bridge will be put in the queue for repair and the frequency of inspections will increase, said Jerome Hajjar, professor and department chair at Northeastern University’s College of Engineering.

“When a bridge is added to the queue, it can be years before there’s funding to take care of those repairs, even if it’s added to the top of a state’s queue,” Hajjar said. “The engineers have been working to repair as much as they can. Safety and keeping safe bridges open is the goal, but the struggle is related to the insufficient funding that goes into repairing the aging infrastructure in this country, including bridges.”

If more serious deterioration is found, authorities will limit the amount of weight the bridge carries by restricting heavy vehicles or traffic. In dire situations when the structure is affected, a bridge could be immediately closed for repairs.

The Interstate 40 bridge connecting Arkansas and Tennessee over the Mississippi River was shut down in May after inspectors found a crack in one of two 900-foot (275-meter) horizontal steel beams critical for the bridge’s structural integrity, forcing thousands of trucks and cars to detour until the bridge reopened at the end of July after repairs.

HOW MANY BRIDGES ARE RATED POOR?

The American Road & Transportation Builders Association, which advocates for transportation infrastructure investment, issues an annual report on the state of US bridges based on inspection reports. The most recent report using 2021 data showed more than 43,500 of the country’s roughly 615,000 bridges were rated poor.

That number is about 4,000 less than those reported to be in poor condition nationally in 2017. Advocates at the association say that it’s a glacial pace for repairs and that dedicated funding is critical to catch up.

In Pennsylvania, the association’s report showed almost 3,200 bridges with a poor rating—a drop from five years ago of nearly 1,000 bridges. But more than 2,100 of those bridges have reached a level of deterioration requiring weight or traffic limits.