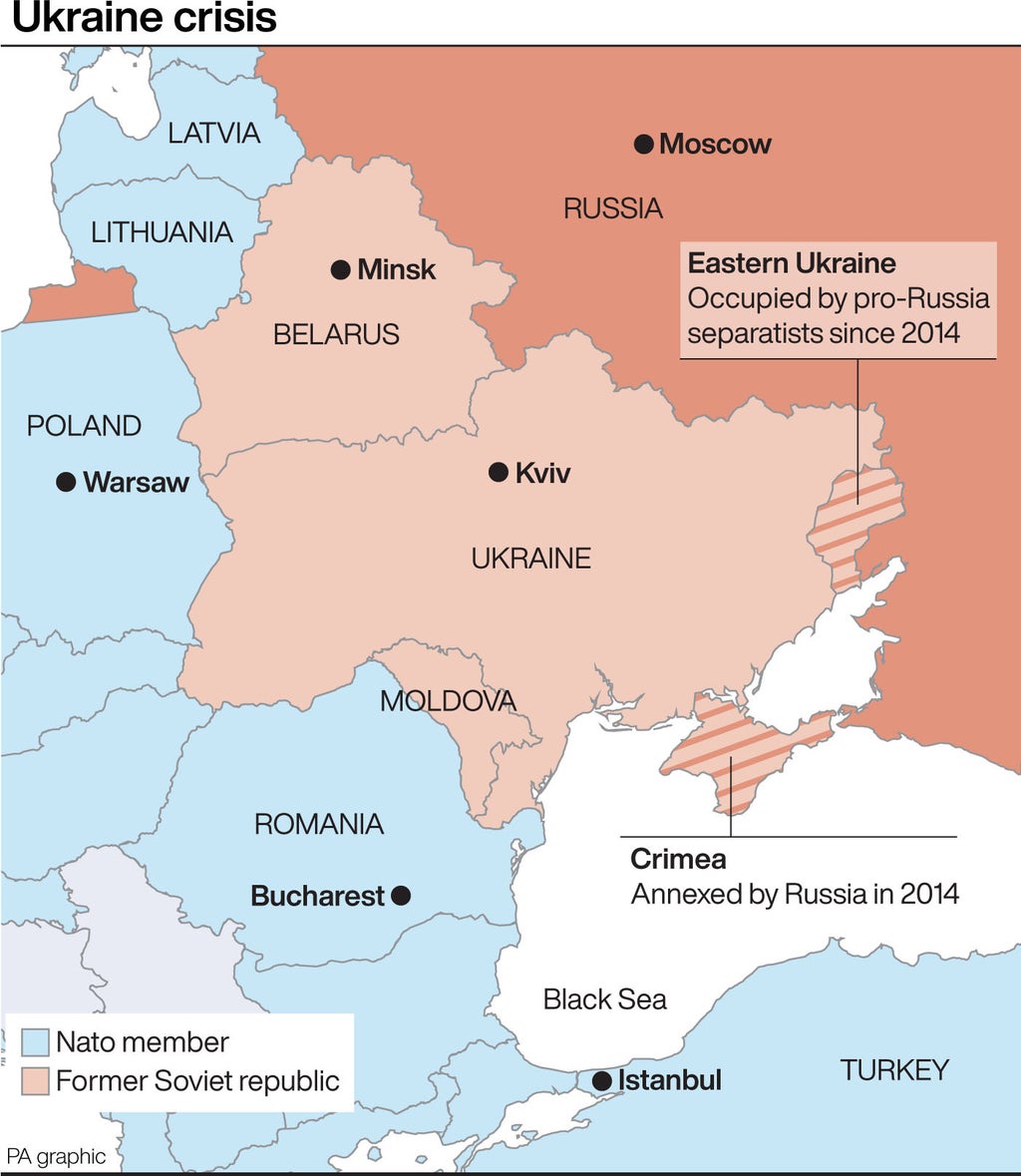 Multiple offensives are being planned by Russia along Ukraine’s borders, with Kiev the main target if Vladimir Putin decides to attack, according to Western officials.

More than 60 percent of Russia’s ground combat power, half of its air force, and a significant proportion of its special forces will take part in an invasion on a massive scale, with a Kremlin-backed regime installed if the capital is occupied, they claim .

The alarming assessment comes amid last-ditch diplomatic efforts to prevent conflict, including a visit to Moscow on Tuesday by German chancellor Olaf Scholz.

Foreign minister Sergey Lavrov said Russia was finalizing its response to US proposals for easing tensions, indicating some room for talks.

But Ukraine repeated its commitment to joining NATO — a key sticking-point — and President Volodymyr Zelensky declared that Wednesday, which US officials warned could be the date of a Russian invasion, would be a “day of unity” in his country.

“We will hoist national flags, put on blue and yellow ribbons and show the world our unity,” he said.

Analysis of forces movements show that 100 Battalion Tactical Groups (BTGs) out of a total of 170 in Russia’s armed forces are in place, with another 14 on their way, the intelligence officials say.

The alarming scenario is the latest to be presented alongside Western claims that military action is now imminent — but it does not stipulate that attacks could begin on Wednesday.

The build-up, structure and distribution of Russian forces could not be for anything other than an attack on Ukraine, the officials insist, and the scale and disposition of personnel and weapons indicates that action would be far bigger than small incursions that may have been planned in the recent past.

Tanks and artillery, warplanes, and ballistic missiles have been placed at forward positions at the border. At the same time, Russian naval vessels have begun to move into the Black Sea off the coast of Crimea.

Kremlin plans include seizing Kiev and carrying out ‘regime change’ in Ukraine, according to the analysis. The proximity of the capital to the border — just 105 miles — would allow the Russians to use their doctrine of speed and capabilities to achieve a shock factor.

Attempts to take the city would, the officials acknowledged, lead to fierce close quarter fighting and loss of lives. But the brutal actions of Russian forces in Syria suggest Mr Putin would not be determined by the prospect of large scale civilian casualties.

As well as an offensive against the capital there would be sustained focus, according to the narrative, on the Ukrainian forces in the east of the country facing the separatist Donetsk and Luhansk republics. The units based there are among the best-equipped and most experienced in the Ukrainian army, and would pose a threat to the Russian forces unless they are neutralized.

The grim intelligence assessments have led to criticism in Ukraine where the economy has taken a major hit from talk of an invasion.

However, the officials insisted that they had full confidence in their information and that disseminating it was a way of letting the Kremlin know that any plots, such as a ‘false flag’ operation to instigate hostilities, cannot be kept hidden.