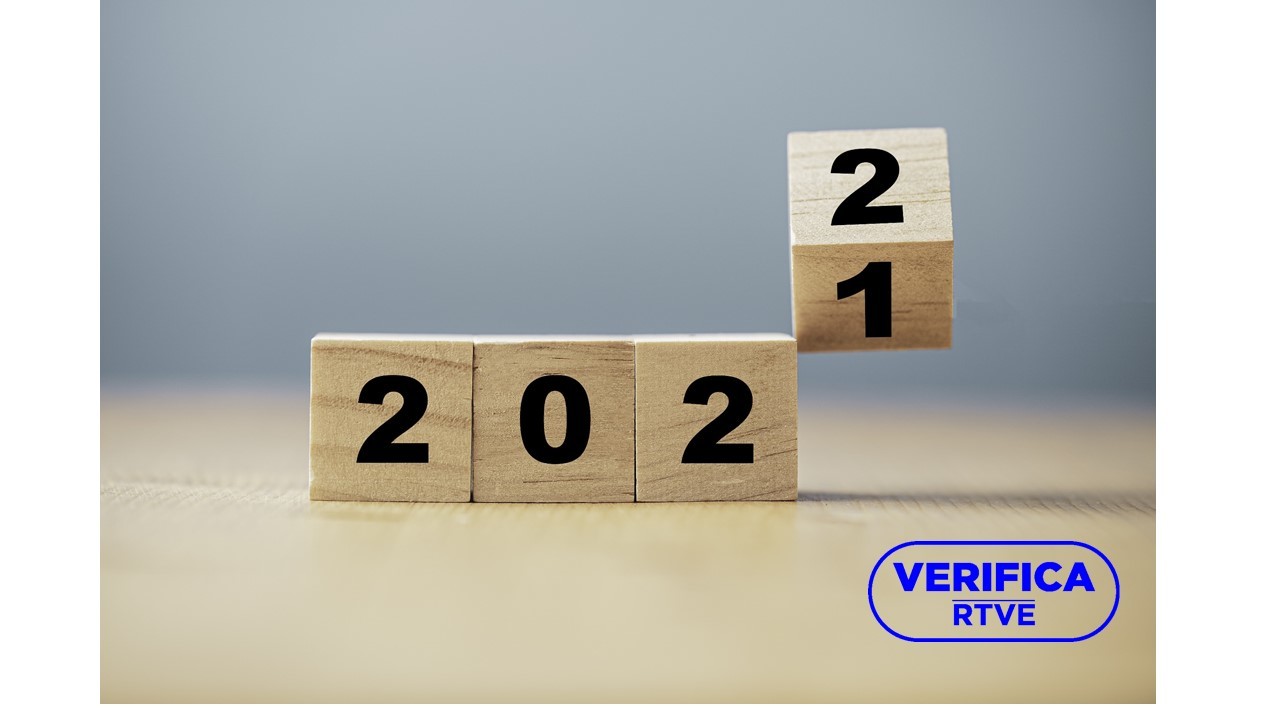 Disinformation has returned to be the protagonist in 2021, a year in which it has not only promoted fallacies about the coronavirus pandemic but has also diversified in topics and authors. From hoaxes about vaccines to lies against immigrants, to manipulation on the Belarusian border with Poland, at VerificaRTVE we explain the disinformation trends of 2021 and those that will probably continue in 2022.

The weight of denialism. From the networks to the streets

The denial group, made up of people who deny the validity of the sanitary measures taken against the pandemic and even the very existence of the SARS-CoV-2 virus, has continued to be very active in spreading false content. Their role has been notable in calling for demonstrations: we have seen them in protests held in Spanish cities against vaccines, against restrictions due to the pandemic and against the COVID-19 passport. Some of these demonstrations brought together thousands of people, but in the case of others, their connection with the anti-vaccine protests was invented.

A much commented episode this year and in which they participated was the isolation imposed on a group of minors on their end-of-year trip in Palma de Mallorca due to an outbreak of COVID-19 among them. On that occasion, videos were broadcast of known members of the denial movement helping minors to bypass confinement in a hotel.

EU: towards the digital services directive

In 2021, the European Observatory against Disinformation (EDMO) began conducting joint studies based on the experience of its members (EU verification teams). This has made it possible to verify the extent to which disinformation trends are shared internationally (1 and 2). It is observed that hoax patterns are repeated in almost all countries just by changing your geographic frame to a local environment.

In the EU, 2022 will be a year to advance the new Code of Good Practice for large platforms and the approval of the European Directive on Digital Services (Digital Services Act or DSA in its acronym in English). It will contain relevant passages for the control of disinformation on the platforms. In the vicinity of the DSA, the European Commission is also promoting the development of an Integrity Code for European verifiers. It will determine the correct practices in this field, but its greatest relevance will come later, when it is decided which entities should supervise it. It is a matter of relevance for citizens: the processes for choosing who to supervise in areas as sensitive as disinformation should be democratic and transparent.

The Department of Homeland Security (DSN) has included disinformation campaigns in its list of threats within the National Security Strategy 2021 (page 54). This body, dependent on the Presidency of the Government, is making progress in establishing a process for detecting external interference that completes its participation in the rapid alert system established by the EU so that its partners can exchange information in this regard. It is foreseeable that official attention to disinformation will continue in the future, although many experts point out that what needs to be reinforced above all is the educational dimension (media and digital literacy) against the phenomenon, which is social, multifaceted and not only linked to foreign security.

Spain has also been the first country to receive 10,000 million of the first tranche of NEXT Generation Funds. Here are two RNE programs to better understand what they consist of (1 and 2) and the expert Pablo Simón explaining them. These funds constitute the EU’s stimulus package to achieve pandemic recovery and create a greener and more digital economic system. It is expected that some of the help lines of the Spanish plan that will manage them (called “Recovery, Transformation and Resilience”) will go to projects against disinformation.

Therefore, it will be the first EU country to receive a payment, worth € 10 billion, once the other Member States authorize it. pic.twitter.com/PMVDZf1YbL“

The conflict unleashed on the border between Poland and Belarus, with thousands of immigrants held back, drew yet another front of international disinformation. Was hoaxes, media manipulation and propaganda of the governments involved, in some cases to demonize immigrants and in others to blame each capital, Warsaw and Minsk.

Some experts considered that it was a case of “hybrid warfare”, in which disinformation plays a priority role compared to the military media. Others saw the hand of Russia behind, although nobody could assure us 100%. Since the CIA directly targeted Putin for disinformation campaigns launched from Russia in the 2016 US elections, the Kremlin remains the number one suspect in foreign interference. The Strategic Communication Working Group of the European External Action Service (EuvsDisinfo) has been reporting since 2015 on propaganda operations in Eastern Europe, Moscow’s former sphere of influence. It offers the most abundant compilation of false or misleading information with a fingerprint, traits or Russian origin. This year, examples continued to be produced, especially of negative treatment of the European news in Russian media such as RT, although there is another country whose disinformation potential also worries more every day, China.

So that the same thing as in 2016 would not happen, in its November 2020 elections the US prepared itself against foreign interference. But the biggest shocks ended up coming from hoaxes and conspiracy theories promoted by American groups, mainly from the orbit of the extreme right. This is the case of QAnon or the Proud Boys. The confluence of far-right-conspiracy-denial interests has been noted throughout the year. We have seen banners with the Q logo in European demonstrations, but above all a lot of political ideology in many hoaxes that were disseminated in relation to health measures to stop COVID-19.

Regular reports by Facebook of coordinated campaigns of inauthentic digital activity show that disinformation has evolved, it is now a hydra with many faces and cannot be blamed solely on authoritarian governments. There are more and more local entities involved in its expansion in democratic countries, from local extremist leaders to companies that do business from commissions of unknown author with information manipulation. The Oxford Internet Institute also reflects in its reports that industrialization and that variety of actors involved in disinformation (1 and 2).

With a deep dive into the Chinese operation that created a fake “Swiss biologist” back in July.

I think of that one as Operation Swiss Rôle. https://t.co/2DynDfMRQv“

To overcome the difficulty of spreading their false content on technological platforms such as Twitter, Facebook and YouTube, with more advanced moderation systems, misinformers are turning to alternative avenues. They now promote their content, especially videos, from websites such as Odysee, Bitchute or Rumble to prevent them from being removed from the network.

Following the serious incidents of January 6, 2020 with the assault on the US Capitol, Twitter and Facebook suspended the accounts of then-President Donald Trump. In response, the New York tycoon has promoted his own network, Truth Social, which will be operational in the first months of 2022. In Spain, this commitment to alternative websites, including Parler, which is the favorite of many Trump followers, has been gaining weight among misinformers, with a continuous and growing dissemination of audiovisual content. All while Telegram continues as a semi-underground channel chosen to broadcast hoaxes that later flourish in open networks.

In the same way that they resort to alternative channels to spread their fallacies, we have seen how misinformers in Spain use digital channels to finance themselves. They use methods to receive direct payments such as PayPal but also join crowdfunding platforms like Patreon.

Disinformation groups and individuals with tens of thousands of followers use this crowdfunding to fund what they consider to be work. They ask their users for amounts that can range from a single euro to several hundred per month and they can hide their patrons and the money collected.

Cybercrime has grown significantly boosted by an increase in the role of home computing, telecommuting and online shopping. This year we were very busy denying phone calls that were misleading, for example about appointments to get vaccinated. But above all we perceive an increase in cybercrimes, especially identity theft or phishing. The Study on cybercrime in Spain in 2020 by the Ministry of the Interior collects data from Interpol stating that 59% of cyber threats are phishing scams (p. 11). Security firm Proofpoint publishes the results of a global survey of more than 4,000 companies in its 2021 State of the Phish study. It shows that 75% of companies have been victims of phishing attacks in 2020 (p. 5). In 57% of cases the attackers achieve their objective and access relevant information (p. 31).

Another very worrying type of cyberattack is Ransomware or the hijacking of the computer systems of a company or institution. References to this type of crime are published daily in Spain, such as the one that affected the Asturias Health Service in December or the Autonomous University of Barcelona in October. The increase in this type of threat has led the National Cybersecurity Institute (INCIBE) to open in April 2021 a special alert and response system on this type of attack. There is nothing to suggest that in 2022 the growing trend experienced in recent months will stop. In any case, it should be remembered that the studies and reports that put figures on the expected increase in this type of crime during the coming months are sponsored by security companies that sell commercial solutions against cyberattacks. In VerificaRTVE we inform you of how to protect yourself against computer attacks in articles like this one about phishing or the cybercrime section that we update with the complaints you send us.