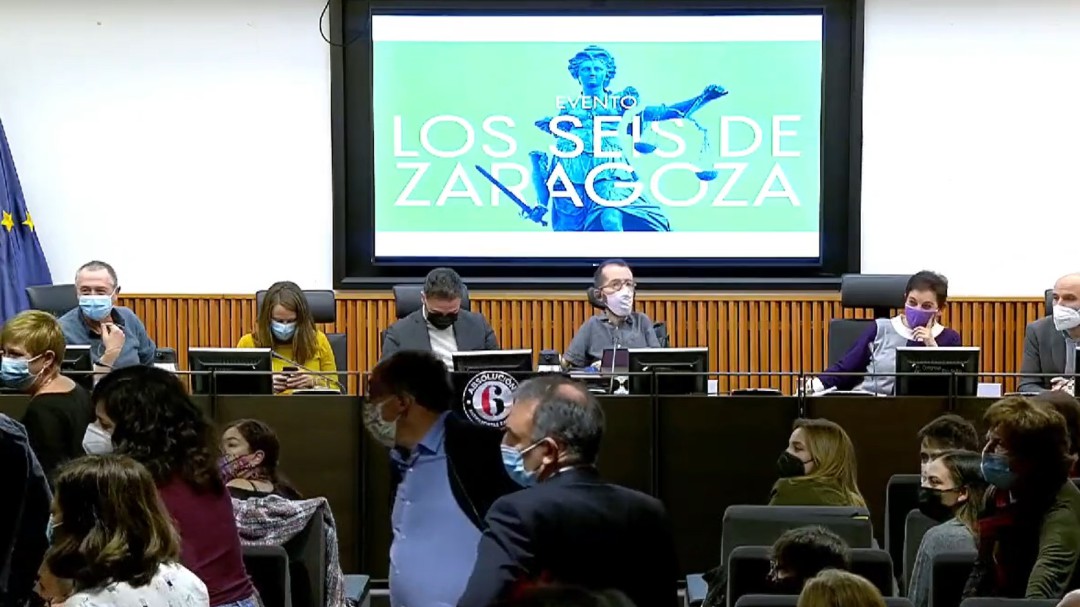 United We can believe that Vox’s boycott of the act that was held in a congressional room on Wednesday cannot go unanswered by the presidency of the Chamber. Jaume Asens, president of the parliamentary group, will allow a letter to Meritxell Batet asking him to summon the deputy who hid the loudspeaker in one of the seats and from where the anthem of the Police and the Civil Guard was played. The intention of the morados is that Manuel Mariscal and the advisor of the far-right party are filed for altering the parliamentary work.

It all happened late in the afternoon on Wednesday. Spokespersons for different leftist groups such as Gabriel Rufián, Pablo Echenique or Mertxe Aizpurua were intervening in the conferences called by Podemos. The intention was to show their support for 6 young people convicted of an attack on authority and disturbance of public order in a demonstration held in Zaragoza in 2019, an act that for the extreme right represented “a coven” against the security forces. He was about to finish the interventions when the anthem of the Civil Guard began to sound from one of the seats.

Several deputies present in the room assure that at first they thought that the sound came from the sound system itself. Others, such as Podemos spokesman Pablo Echenique, pointed from the outset to a possible boycott of the De Santiago Abascal party. “It must have been those of VOX”, he is heard to say in the images offered by the audiovisual services of the camera. In them you can see, for example, the deputy Sofía Castañón or the secretary of state for social rights, Enrique Santiago, puzzled looking for the origin of the sound.

Vox takes out chest of the boycott brick in hand

It was the party itself, Vox, in charge of confirming the authorship of the boycott. This morning to questions from journalists, Deputy Manuel Mariscal has taken his chest out of the feat. We did what we had to do, bring dignity to a room where a coven was being held against the Police and the Civil Guard, “he said, taking a piece of brick from a briefcase as he entered the Hemicycle.

The ‘performance’ of the training was perfectly prepared. The deputy has arrived accompanied by the president of his formation, Santiago Abascal, and the parliamentary spokesman, Iván Espinosa de los Monteros. The three have walked the corridor, they have been recorded by the cameras but only Mariscal wanted to speak. “This is a boycott, this is a boycott,” he reiterated with a piece of brick in hand. “This is what those of Podemos, the vice president’s employees, launched at us in a ceremony in Vallecas. This is a boycott ”.

United We can ask Batet to act

For Podemos, the extreme right took another step yesterday in its attitude of degradation of the democratic principle. “All the red lines were passed,” said Jaume Asens, who believes that the event is “serious.” “It is a disorder, an alteration of the proper functioning of this house that cannot go unpunished.” The group asks the president of Congress to take appropriate measures, including disciplinary measures. “You have to be forceful, you can’t pass certain red lines.” “This can not go unpunished”.

The president has not commented on the specific facts. Sources from his team do assure that he will assess whether to bring the issue to the table of Congress when he receives the letter.

See also  Concert for Ukraine: Ed Sheeran, Emeli Sande and Camila Cabello join line-up and how to get tickets for ITV concert