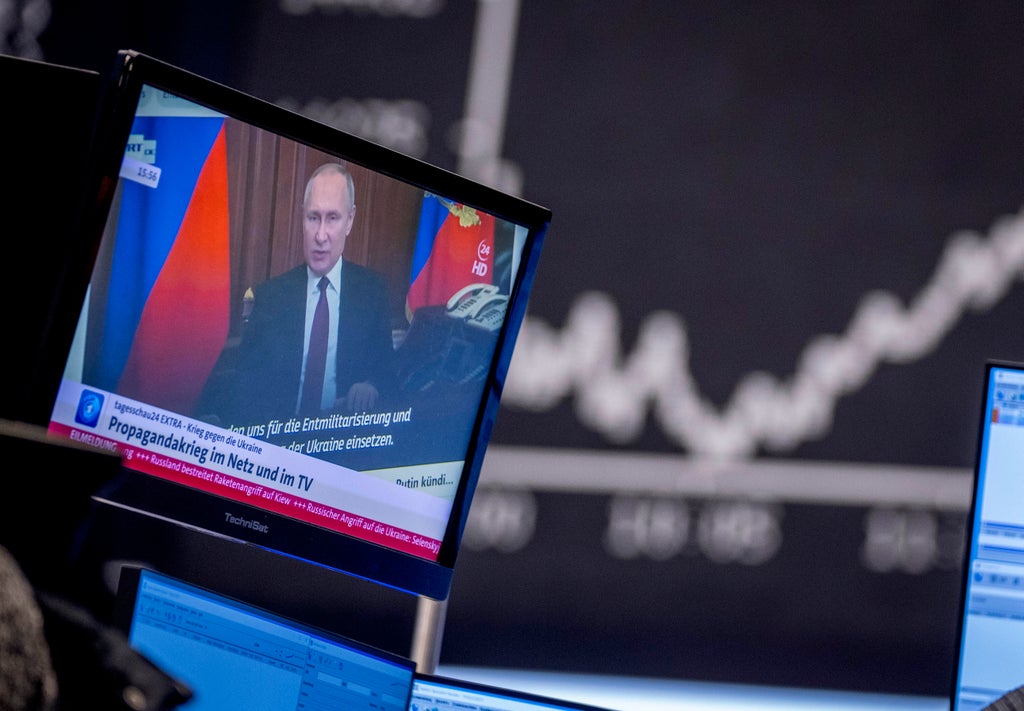 The Russian TikTok video has it all: a cat, puppies and a pulsing background beat. It’s cute, watchable and hardly seems the stuff of state propaganda.

In 2014, Russia flooded the internet with fake accounts pushing disinformation about its takeover of Crimea. Eight years later, experts say Russia is mounting a far more sophisticated effort as it invades Ukraine.

Armies of trolls and bots stir up anti-Ukrainian sentiment. State-controlled media outlets look to divide Western audiences. Clever TikTok videos serve up Russian nationalism with a side of humor.

The effort amounts to an emerging part of Russia’s war arsenal with the shaping of opinion through orchestrated disinformation fighting alongside actual troops and weapons.

In the cat video, a husky puppy identified by a digitally inserted US flag swipes at the tail of a tabby identified by a Russian flag. The cat responds with a ferocious jab that sends the hapless dog scurrying. The clip, which has been viewed 775,000 times in two weeks, is the work of an account named Funrussianprezident that boasts 310,000 followers. Almost all of its videos feature pro-Russian content.

“It could just be a patriotic Russian fighting the good fight as they see it, or it could easily be something directly affiliated with the state,” said Nina Jankowicz, a disinformation researcher and expert on Eastern Europe at the Wilson Center in Washington. “Russia has been perfecting these tactics.”

Now they are putting them in play.

Analysts at several different research organizations contacted by The Associated Press said they are seeing a sharp increase in online activity by groups affiliated with the Russian state. That’s in keeping with Russia’s strategy of using social media and state-run outlets to galvanize domestic support while seeking to destabilize the Western alliance.

Across the internet, there’s been a rapid uptick in suspicious accounts spreading anti-Ukrainian content, according to a report from Cyabra, an Israeli tech company that works to detect disinformation.

Cyabra’s analysts tracked thousands of Facebook and Twitter accounts that had recently posted about Ukraine. Researchers saw a sudden and dramatic increase in anti-Ukrainian content in the days immediately before the invasion. On Valentine’s Day, for instance, the number of anti-Ukrainian posts created by the sample of Twitter accounts jumped by 11,000% when compared with just days earlier. Analysts believe a significant portion of the accounts are inauthentic and controlled by groups linked to the Russian government.

“When you see an 11,000% increase, you know something is going on,” said Cyabra CEO Dan Brahmy. “No one can know who is doing this behind the scenes. We can only guess.”

The work has been under way for some time.

Researchers at the Atlantic Council’s Digital Forensic Research Lab analyzed 3,000 articles by 10 state-owned Russian news outlets and noticed a large increase in unfounded claims that Ukraine was poised to strike separatist groups. Overall, Russian media claims of Ukrainian aggression emerged by 50% in January, according to the research.

“This is the way they go to war; it’s a central part of Russian doctrine,” said Jim Ludes, a former US defense analyst who now directs the Pell Center for International Relations and Public Policy at Salve Regina University. Ludes said Russian disinformation campaigns are intended to galvanize Russian support while confusing and dividing the country’s opponents.

See also  My non-traditional Eid includes a secret Santa. Some orthodox Muslims don't like that

For Russians and pro-Russian separatists in Ukraine, the message is that Russia is trying to defend its own people against Western-fueled aggression and persecution in Ukraine. Similar tactics have been used, including by Nazi Germany when it invaded Czechoslovakia under the guise of protecting ethnic Germans living there, Ludes noted.

In the West, Russia seeks to sow division and reduces the chances of a unified international response. It does this in part through a stable of state-controlled media outlets such as Sputnik and RT, which publish in English, Spanish and several other languages.

“The invasion is off,” read one headline in RT last week, just days before Russian troops moved into eastern Ukraine. “Tucker Carlson Slams Biden for Focusing on Putin, Ukraine Instead of US Domestic Problems,” reads another in Sputnik News, reflecting a common Russian practice: citing government critics in the US (like Fox News host Carlson) to suggest America’s leaders are out of touch.

Russia has also employed cyberattacks in its invasion of Ukraine, and while they pose a serious threat, online propaganda can leave even more lasting damage if it succeeds, according to retired Army Lt. Gen. Michael Nagata, a former director of strategic operational planning at the US National Counterterrorism Center.

“What is far more dangerous is Russia’s ability to influence what populations everywhere believe,” Nagata said. “To get them to believe things that are useful for Russian strategic interests… If you’re able to change what an entire population believes, you may not have to attack anything.”

The European Union signaled its concerns about RT on Wednesday when it included RT’s editor-in-chief on a list of sanctions imposed on Russian officials. The EU called RT’s leader, Margarita Simonyan “a central figure of the government propaganda.”

On Saturday, Facebook announced that it would prohibit RT from running ads on its site and said it would expand its use of labels to identify state-run media.

Ludes said he’s been pleased to see the US and its allies forcefully push back on Russian disinformation and even seek to preempt it by publicly disclosing Russia’s plans.

“The Biden administration has demonstrated some creativity in using intelligence to respond,” he said. “We haven’t seen that from the West since the cold war days.”

Andy Murray and Wimbledon: Recent form allows us to carve up draw and dream a bit