Russia’s invasion of Ukraine and the associated response from Western and other countries has disrupted markets. It has also put active equity fund managers and their portfolios through a real-time stress test. As expected, Russian equities sold off heavily when the news first broke. Some managers with exposure to Russian equities have significantly reduced allocations. Others may have adjusted the assumptions of their investment theses and valuation estimates but retained their holdings.

In some cases, it is both, with decisions made on a sector- or company-specific basis. What’s become clear at the time of writing, however, is that the ability to trade these shares is now pretty much impossible. MSCI has also announced that, effective March 9 2022, the Russian market will be removed from its emerging markets indexes.

Mainstream global emerging markets equity managers tend to have more limited exposure to Russian equities. The table below shows funds in the global emerging markets equity Morningstar Category that are rated by Morningstar analysts by those with the largest exposure to Russian equities, as of the most recently available portfolio date (either end of December 2021 or end of January 2022).

Because these dedicated funds typically have less Russian exposure than Russia or emerging Europe funds, there hasn’t been a need to suspend dealing, and managers have reported relatively normal trading conditions in terms of investor inflows and outflows. However, as daily-dealing funds need to produce daily net asset values, pricing Russian holdings has now become an issue. Where no vendor prices for Russian stocks or their corresponding GDRs are available, some asset managers have stated that they will look to apply the percentage change of Russian index exchange-traded funds, or ETFs, as a marker for the performance of those positions. 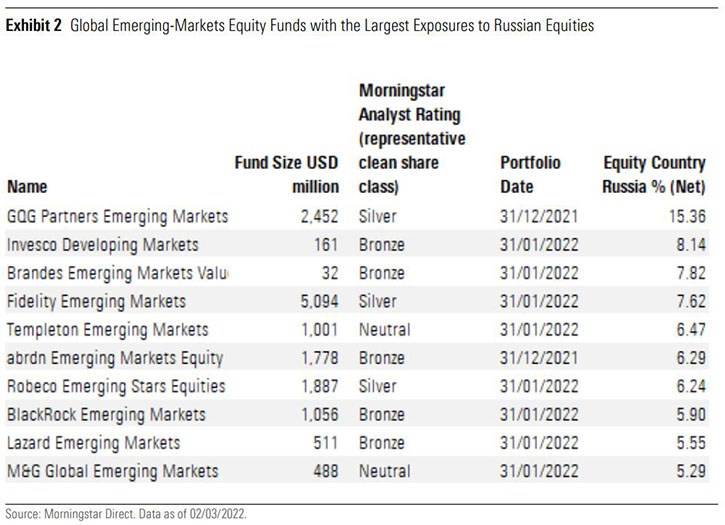 What Have Managers Done?

Morningstar analysts have been in contact with managers of rated global emerging markets funds for their thoughts on the market ramifications and the actions they’ve been taking in their portfolios. There is a clear consensus that the situation remains highly fluid and uncertain. The sanctions imposed on Russia are seen as significant, and there could well be more to follow, so managers remain watchful for where there may be further impacts. There is also agreement about global inflationary effects, given Russia’s global share of oil and gas production, and the potential for a significant inflationary shock that may persist longer than previously anticipated.

As for Russian stocks, managers have been moving their portfolios according to their own particular starting positions and views, assimilating and applying new information as developments chart their currently uncertain course.

The fluidity of the circumstances convinced one prominent manager to chop his Russian stake. GQG Partners Emerging Markets Equitywhich has a Morningstar Analyst Rating of Silver on its clean I share class, has dramatically reduced its exposure to the country this year, a firm spokesperson said on Friday, February 25. The fund’s stake had been about 16% of assets in December 2021 , according to fund disclosures, but at this more recent date, the firm reported it had only about 3.7% of assets left in Russia.

Fund manager and firm founder and CIO Rajiv Jain told investors in a Thursday, February 24 conference call that he reduced the fund’s exposure to companies he thought would most feel the effect of sanctions. He did not name the specific stocks he had sold. At the end of December 2021, Russian firms such as Sberbank, Gazprom, Lukoil, Rosneft, and TCS Group were prominent positions in the portfolio. “The markets are obviously very volatile at the moment,” the spokesperson said, “and we will aggressively add or cut risk as needed.” Jain, a former Morningstar Manager of the Year, is renowned for his predilection for higher-quality stocks and vigilant risk control. Jain often sticks with companies and sectors for years, but he will make substantial adjustments owing to changing economic or industry conditions or to gyrating valuations.

Fidelity Emerging Markets, which is rated Silver on its clean Y share class and is managed by Nick Price and Amit Goel, came into the crisis with an overweight Russia position relative to its MSCI Emerging Markets Index prospectus benchmark (7.6% versus 3.3% as of the end of January 2022). The managers stated: “This was based on our fundamental, bottom-up views on individual stocks and our incorrect assumption that we would not see a full-scale invasion. That said, we felt the risk of sanctions was skewed towards banks rather than exporters and had been shifting at the margin some of the fund’s exposure from domestic companies towards large exporters.”

See also  Spain approves the new Mental Health Strategy, which has not been updated for 12 years | Society

They have since managed to trim their exposure. Russian equity exposure now totals around 2% and comes via five individual holdings: Sberbank, Gazprom, TCS Group, Novolipetsk Steel, and Phosagro. Of the top two holdings (Sberbank and Gazprom), Price states that the former looks more vulnerable, as “the sanctions and broader uncertainties mean that this period is likely to be extremely challenging.” (Sberbank’s LSE-listed shares are now suspended). As for Gazprom, he believes the investment thesis remains sound, with a sizeable proportion of its costs denominated in the rouble, which has hit new lows, while gas prices are at all-time highs and profits and cash flows are at record levels.

James Syme, manager of Bronze-rated JOHCM Global Emerging Markets Opportunities, has differed somewhat in approach, substantially reducing commodity exposure. At the end of January, the fund’s allocation to Russia was around 4.7%, representing a 1.4-percentage-point overweighting relative to the index, through positions in Gazprom GDRs (2.3%), Sberbank GDRs (1.7%), and Globaltrans GDRs ( 0.7%). Exposure has since failed: for example, Sberbank has been sold, and the manager has stated at time of writing that the portfolio had no exposure to suspended securities.

Some managers came into the crisis with an underweight position in Russia, such as Silver-rated (clean C share class) JPM Emerging Markets, managed by Leon Eidelman. The strategy has historically been underweight in energy and materials firms relative to the index. These names tend to be avoided because they are commodity-price sensitive, therefore lacking pricing power, and are deemed unattractive from a corporate-governance perspective. At the end of January, the fund’s only Russia exposure was its 1.1% position in Sberbank; by the end of February, the fund had no exposure to the country.

Sberbank, one of the most widely held Russian stocks, is one of the sanctions’ biggest targets because the state owns half of it. The bank has managed to operate under the capital-raising and debt-selling limits of sanctions imposed after Russia’s 2014 annexation of Crimea and activity in eastern Ukraine. The restrictions leveled last week, however, prevent the institution from transacting with US banks (European banks are expected to ordain similar injunctions), which could affect its intrinsic value, many of the managers said. That value could fall even further if the bank is one of the institutions removed from SWIFT.

However, the four-person investment committee at the helm of the Bronze-rated (clean I share class) Brands Emerging Markets Value doesn’t necessarily believe that value has been permanently impaired at Sberbank, given it is still Russia’s dominant bank, with a strong balance sheet supported by mostly local deposits and a 22% return on equity. As an alternative to SWIFT, Russia could resort to its own payment system or China’s network. Besides Sberbank, the fund owned a large oil company and some local firms that should be less vulnerable to direct sanctions, such as telecommunications company Mobile TeleSystems, holding company Sistema, and children’s retailer Detskymir.

Bronze-rated (clean S share class) Invesco Developing Markets’ Russia stake shrank to about 4% as of late February from 9% at the end of 2021. The Russian market’s steep year-to-date drop probably had as much to do with the decrease as manager Justin Leverenz’s decisions. Despite the turmoil, Leverenz still likes the two stocks that accounted for 80% of the fund’s Russia exposure – Yandex and Novatek – which have both plunged. The market is giving Russian Internet and e-commerce company Yandex’s search business a single-digit price/earnings ratio and ascribing no value to its other businesses, which include market-leading food delivery, classified advertising, media, and logistics ventures, he said on February 25.

Meanwhile, gas producer Novatek, which the fund has owned for 15 years, derives strong competitive advantages from its low-cost liquefied natural gas projects in northern Russia and had an attractive valuation even before the war jolted oil prices. “It has a strong balance sheet and what we consider to be unparalleled assets that we believe will support growth for years to come,” Leverenz said.

The odds of more rough markets ahead are high. But many echoed this observation from Brandes’ team: “[T]he initial market sell-off before wars or significant geopolitical events is often sharp, but … subsequently the market has often recovered, so it is important to be watchful and not over-react.”