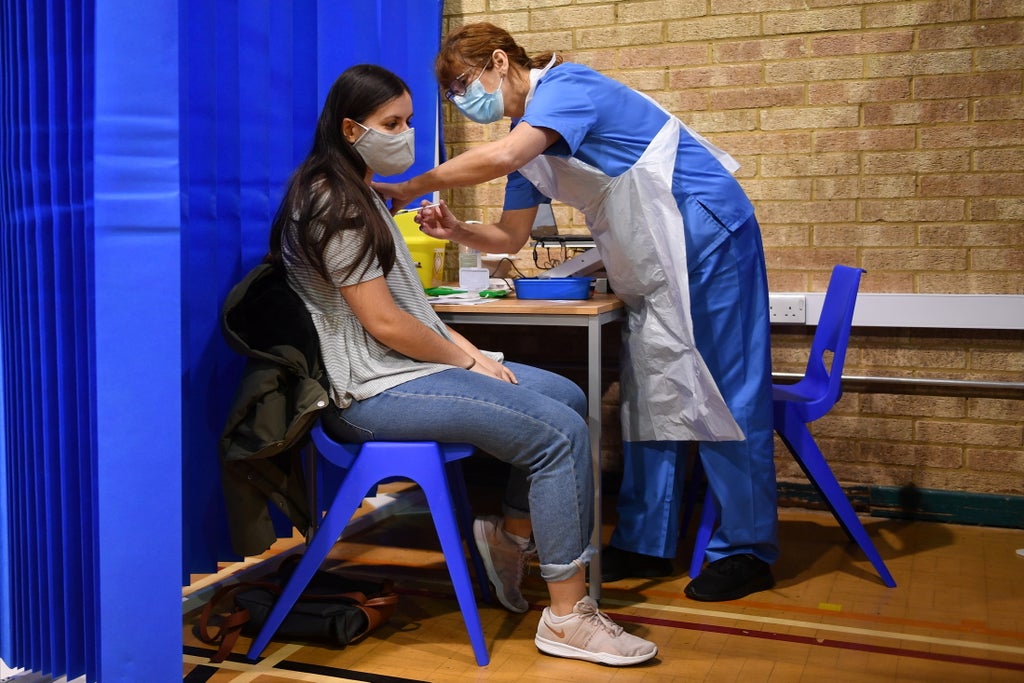 Wales is to offer all five to 11-year-olds a Covid-19 vaccine, becoming the first UK nation to do so.

Welsh health minister Eluned Morgan said she had made the decision following advice from the Joint Committee on Vaccination and Immunization (JCVI), which she said will be published “in due course”.

“I would encourage all families with children between the ages of five and 11, who are not in any clinical at risk groups, to visit the Public Health Wales website for information about vaccination and to begin a conversation about whether they want to take up this offer,” she said.

A JCVI source told The Independent: “We made a very nuanced decision more than a week ago and expected the announcement [last Friday].”

The announcement was subsequently released, amid much confusion between UKHSA officials and JCVI members, but now appears to have been communicated to government ministers in England and the rest of the UK.

Children aged between five to 11 who are in an “at risk” group are already eligible for Covid vaccines in Wales.

In her statement, Baroness Morgan said: “I have received the JCVI’s final advice about Covid-19 vaccination for children aged five to 11 who are not considered to be at clinical risk.

“Children in this age group who are classed as being at clinical risk are already being offered the vaccine and more than one in four have already taken up the offer of vaccination.

“The JCVI advice will be published in due course. I have accepted this advice and thank the JCVI for scrutinizing the science and evidence and setting out its advice in a careful and considered way. Our intention, as it has been from the start of the pandemic, is to follow the clinical and scientific evidence.

“In accepting this advice, I will be asking the health boards to carefully consider the issue of equity within their operational planning. We will work closely with Public Health Wales and the health boards to ensure there is age-appropriate factual and trusted information about the potential benefits and risks of vaccination for this age range.”

Baroness Morgan told members of the Welsh parliament (Senedd) earlier on Tuesday that the government was still waiting for further guidance from the JCVI on additional jabs for older people, but was pushing ahead with the plan for younger people nonetheless.

“In terms of vaccinations for children between five and 11 years of age, we are already implementing a plan to ensure that this happens,” she said.

“We’re not going to do that as a matter of urgency, as we did over the Christmas period. That’s partly because the risk isn’t as great to that cohort.

“And we’re also waiting to hear from the JCVI to see whether there will be a need for a booster on top of the booster for older age groups in the spring.

The UK medical regulator, the Medicines and Healthcare products Regulatory Agency (MHRA), approved the Pfizer Covid-19 vaccine for use in children aged five to 11 last year. The dose approved for children is lower than that used for adults and older children.

After the announcement, the JCVI said that the vaccine should be offered to at-risk children in this age group. It is yet to announce its decision about wider use among children aged five to 11.

Over 5.5 million dosages of the vaccine have already been administered to five to 11-year-olds in the US alone.

A government spokesperson in Westminster said: “No decisions have been made by ministers on the universal offer of a Covid-19 vaccine to all five to 11-year-olds.

“We are committed to reviewing the JCVI’s advice as part of wider decision-making ahead of the publication of our long-term strategy for living with Covid-19.”

The government in England is expected to make an announcement next week.

Baroness Morgan made the announcement as figures were released showing coronavirus deaths rose in Wales last week despite falling across most English regions.

Wales is currently at Alert Level 0, meaning there are no legal limits on the number of people who can meet, including in private homes, public places or at events. All businesses and premises are also open.

Covid passes for indoor and outdoor venues are due to be scrapped on 18 February, and the requirement to wear face coverings in certain venues is ending 10 days later on 28 February.