Skip to content
Home News Vladimir Putin: The president whose obsession with Russian security may cost him dear 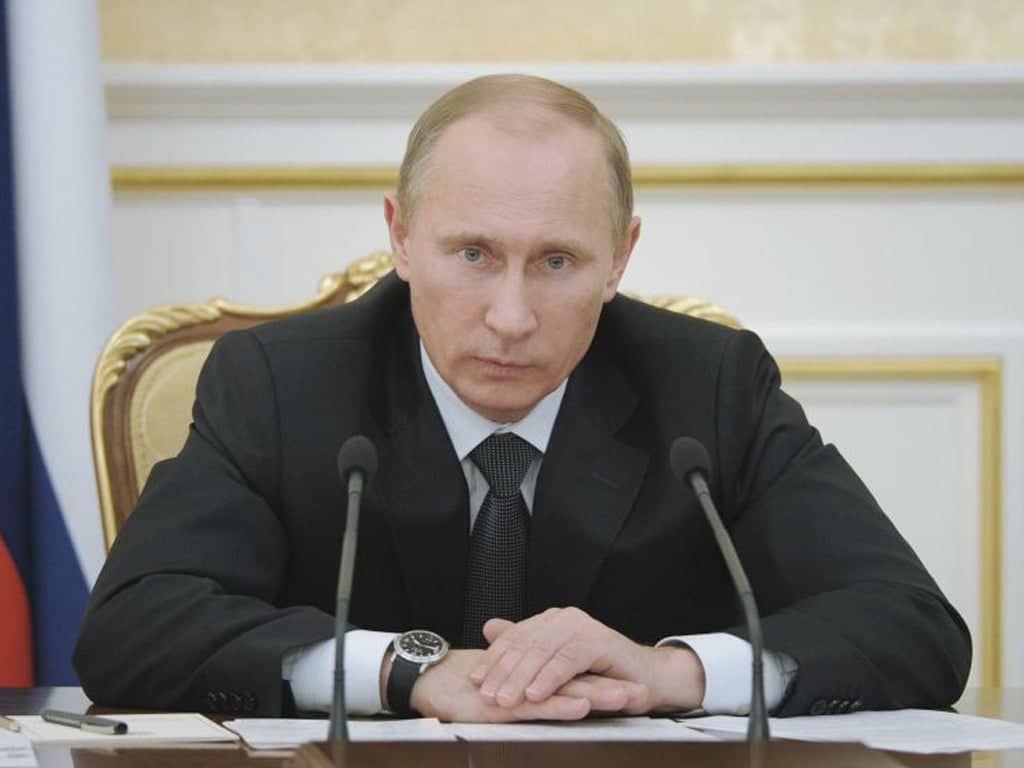 In the weeks since Russia launched its invasion of Ukraine, one man has loomed large: Russia’s president, Vladimir Putin.

Every inch the potentate, he began by soliciting support from key ministers live on TV; he followed this up with an outraged verbal assault on Ukraine, lambasting Lenin, Stalin and Gorbachev for good measure. Three days later, in the early morning in Moscow, he was back on national television announcing the start of military action. The first tanks moved in and the first bombs were dropped within hours.

Russia’s military onslaught has tended to be seen as an old-fashioned war launched by an old-fashioned autocrat, surprising and shocking to everyone who believed such wars to be over, at least in Europe. The scenes of preparations for street-fighting that have emerged from Ukrainian cities in recent days have been tragically reminiscent of black-and-white newsreel from the very same cities Germany invaded in 1941. But the supposedly old-fashioned autocrat also reflects the complexities of the times he has lived through.

Born in 1952, as a post-war baby in what was then Leningrad – now St Petersburg – he reaches his “three score and 10” on 7 October. His early school years coincided with the Khrushchev “thaw” – an easing up after the political and cultural repressions of Stalin. He was in his late twenties when the Soviet Union began what became its disastrous intervention in Afghanistan, and in his mid-thirties when Gorbachev embarked on his – eventually doomed – efforts to reform the Soviet system. By this time, Putin was married with two daughters.

He was in his 40th year when the Soviet Union collapsed, and approaching 50 when Boris Yeltsin designated him his successor. For the past 20 years he has been at the helm of Russia, visibly increasingly his authority as each year has gone by, and always with the hard edge that has characterized his rule, both in regard to crackdowns on domestic civil society – including the imprisonment of the opposition figure Alexei Navalny – and internationally. The radiation killing of the dissident exile Alexander Litvinenko, the chemical attack on the Skripals in Salisbury three years ago, and the attempted poisoning of Navalny have all been laid at Putin’s door – with the Kremlin denying involvement in any of the cases.

Putin faces his next election in two years’ time – a controversial constitutional reform has afforded him the possibility of staying in power beyond his current fourth term, which ends in 2024. So he could, under the current Russian constitution, “go on and on ”. He and his wife divorced in 2014 – they announced it on state TV after an evening at the Bolshoi ballet – partly, it was said, because he had no time for anything except work.

At this point, it is perhaps worth standing back for a moment and trying to appreciate what a cataclysmic series of events Putin and other Russians of his generation have lived through. Their early youth was marked by the optimism of the Khrushchev years, only for those hopes to be dashed. Gorbachev raised hopes again, but made life much less predictable for everyone with aspirations, as established career paths disappeared and those with an appetite for risk were rewarded.

The dissolution of the Soviet Union is the historical turning point, but the actual event was remarkably – miraculously, some would say – peaceful and low-key, although the Ukraine war has perhaps to be seen as part of the longer-term fallout. For Russians in general, the experience of the Soviet collapse was essentially one of economic collapse. The other 14 republics that made up the Soviet Union went their own way, and Russia was left picking up a lot of the bills. Hyperinflation impoverished professionals and the elderly, who took to casual work, including driving taxis (as Putin did) or hawking their possessions on the street. It was not until Putin was made prime minister in 1999, as a prelude to becoming president, that some sort of order started to be restored. Much of his popularity in Russia remains on this, even to this day.

This is the backdrop. But then there are Putin’s individual circumstances and character. His family of him survived the Leningrad siege, when thousands starved, but his elder brother of him died at the age of two before the young Vladimir was born (another brother had previously died in infancy). His father returned disabled from the war, and the family lived in a “communal flat”, where families shared kitchen and bathroom facilities (with predictable tensions). Putin was small and puny as a child, and took up martial arts – in part, it would appear, to defend his corner from him.

Inspired, it seems, by a Soviet spy film, he wanted to become a Soviet James Bond, but was initially turned down as too young and under-qualified. He was sent off to improve his prospects for him, and took a law degree at what was then Leningrad University – a prestigious department, by the way, at a prestigious university. He was singled out for the foreign intelligence service, and was serving at the Soviet mission in Dresden as communism collapsed, country by country, across eastern Europe.

Witnessing the communists lose control of East Germany – hitherto the most ostensibly loyal to Moscow of the eastern bloc states – has to have marked him for life. It also presented him with a personal dilemma. Two years before the Soviet Union was to collapse, Putin switched sides. He took the decision to leave the KGB, and went to work for one of the most progressive administrations in Soviet Russia, the city council of Leningrad – soon to regain its original name of St Petersburg – which was led by the lawyer and democracy campaigner Anatoly Sobchak.

See also  How are the UK's Biggest Equity Funds Doing?

What is not clear – and this is one of the murkier spells of Putin’s career – is whether he truly gave up his first love, the KGB, or remained a spy (as in the “once a KGB man, always a KGB man” cliche ), even as he went to work for what became the new order. My sense, and it is only a sense, is that he threw in his lot with his former law professor – partly out of desperation (where else could he find work to support his family in a country whose political order seemed in perpetual shift?) , but partly because I understood which way the wind was blowing. Personal contacts facilitated a not altogether welcome move to Moscow, an introduction to the Yeltsin clan, and the rest, pretty much, is history.

Such considerations may indeed be part of the picture. But they are not the whole picture. Over the 20-plus years that he has been leading Russia, either as president or prime minister, Putin’s authority – in bearing and speech – has increased immeasurably, but he has retained an ability to switch registers: from coldly inscrutable, to fiercely angry, to quizzical. Even in his anger from him, however, he usually appears highly controlled. He shows what he wants to show; no more

But there are times when anger seems to get the better of him, though it is hard to gauge whether that is for dramatic effect or because he has lost control. One such occasion came in 2004, early on in his presidency, when Chechen fighters besieged a school in Beslan in southern Russia and more than 300 people died. He has struck the same tone – of frustration, impatience and almost personal resentment, spattered with crude, barrack-room language – when talking recently about what he sees as the west’s intransigence over the expansion of Nato and Ukraine’s anti-Russia direction. Labeling Ukraine’s government “drug addicts” and “neo-Nazis”, as he did even as Russian troops mounted their first air raid on the country, exposes the grudge-habouring, street-fighting side of Putin that is mostly kept under wraps.

As he has accumulated power – though not, even now, such power that his writ runs unquestioned the length and breadth of Russia – many myths have grown up about his vast (probably corruptly acquired) wealth, and his ultimate objective, to restore the Soviet Union-or the Russian empire. While people around Putin have certainly benefited mightily from their association, it seems to me that wealth is not what motivates Putin; nor – again in my view – does he have any ambition to restore an empire, of whatever period. In this respect, he is on record as saying: “Anyone with a heart cannot fail to regret the passing of the Soviet Union, but no one with a head could possibly want to bring it back.”

Putin’s central motivation, since his earliest years as president, appears to have been to restore Russia’s standing in the world after what he still sees as the humiliation of the Soviet collapse. But paramount in his view of him are considerations of Russia’s security. This, I think, rather than any tendency towards expansionism, is what the 2008 Georgia war and the annexation of Crimea in 2014 were all about: a profound fear that the west was making inroads into what he regarded as Russia’s security cordon.

This same rationale lies at the heart of the invasion he ordered against Ukraine, a country he sees as having been groomed by the west in recent years to become a Trojan horse by which to prevent Russia from fulfilling its historic potential as a great power. All his best efforts over the years to get the west to address Russia’s security concerns, he said in his declaration of war, had failed. Force was the last resort, he has claimed – although few other international leaders appear to see it that way.

A question now is how far Russians rally behind Putin’s preoccupation with Ukraine – and what looks increasingly like a personal quest. Time was when he seemed to have an unerring ability to sense the popular mood. In recent years, however, perhaps as his demographic of him – those who lived through so many transitions – becomes an ever smaller minority in Russia, so his judgment of him has seemed less sure.

The next few weeks may reveal how far Putin and Russia are one, and how far leader and people may already have drifted apart. Could the Putin be approaching its end?