Like Rashford, Elanga crowned his European knockout debut with a goal via his first touch. Snap!’s royalties could be about to soar after Rhythm Is A Dancer reverberated around the Wanda Metropolitano bowl for 10 minutes.

Madrid was the perfect European away-day for United’s away-dayers: sunshine, sightseeing and a celebration. No photographer or cameraman could do justice to the sight of the 3,300 delirious United supporters in the third tier the moment Elanga rolled the ball past Jan Oblak. From a vantage point where they might have found birds nests, it was just as well there was netting to prevent any from taking flight.

Cristiano Ronaldo, usually restrained whenever anyone else scores, was jubilant. The United supporters had serenaded him louder than any player until Elanga, the youngest member of the traveling party, broke into the right-hand channel. That penetrative run is now beyond the aging Ronaldo.

Elanga was taking his first steps when Ronaldo first stepped onto the Old Trafford pitch in 2003. Atletico were so fixated on mollifying Ronaldo, scorer of 25 goals in his 35 appearances against them before Wednesday night, they underestimated the 19-year-old Elanga.

The Swedish-born adopted Mancunian was always pushed to play in the age group above him and noted for his exceptional pace. Those in the academy who had watched Elanga develop since he was spotted aged 11 at Hattersley FC encountered a calm and confident lad who eschewed arrogance.

Elanga is one of the most dedicated United players in the gym and he worked diligently over the summer with a private coach to beef up for men’s football, with specific work on explosive pace and increasing his jump height. Elanga sustained a shoulder injury in January last year that could have ended his season but his dedicated rehabilitation process, aided by regular cryotherapy, enabled him to earn a first-team squad promotion in April and a debut against Leicester in May.

The Elanga family lived in Hyde, a City stronghold, but he declined their offer in favor of United’s. Before the family relocated to Manchester for a lifestyle change, his father, Joseph, used to welcome a young Zlatan Ibrahimovic to their home in Malmo, where they were teammates. Elanga’s idol was Thierry Henry, a specialist at ending a run into the channel with a first-time finish.

Elanga’s father played for Cameroon and the Indomitable Lions have courted his son. Swedish sources still expect Elanga, an Under-21 international, to commit to the national side and a call-up for next month’s World Cup qualifier against the Czech Republic is inevitable.

Elanga flew under the radar in the United academy. He was the last of the nine players in the 2018 FA Youth Cup squad that ended Chelsea’s monopoly to debut for the club. Teden Mengi and Ethan Laird, whom Elanga lived with in digs, were introduced before Elanga but are both on loan to Championship sides.

Hannibal Mejbri was a headline addition in 2019 and Shola Shoretire’s development so sharp he was named in the reserves training camp when he was 14 in 2018. While they were in the spotlight, Elanga operated in the shadows.

Enter United’s academy building at Carrington and your eyes are immediately drawn to a plaque on the wall bearing the immortal Sir Matt Busby quote: “If you’re good enough, you’re old enough.” The Jimmy Murphy Building is a goal kick away. When Elanga spoke to a few of us 15 months ago via Zoom from a room in the academy building, the background was a shrine to United celebrating their last European Cup triumph in 2008. He is their first player to score in the competition against Spanish champions Athletic.

“There is a pathway there,” Elanga said 16 months ago. “It just shows you that if you’re willing to put the work into it and continue to work hard day in, day out in training there’s a pathway for you there.”

Despite his Scandinavian roots and opportunities under Ole Gunnar Solskjaer, Elanga is Ralf Rangnick’s academy legacy. He was restricted to five minutes all season before he made an impression in Rangnick’s first training session at Carrington, the rain so filthy Rangnick compartmentalized the session with indoor and video sessions.

Elanga was another dissatisfied player attempting on a January loan. There had already been interest from Championship clubs and a Premier League side in the summer. The day after his training performance, Elanga enjoyed a lively cameo against Crystal Palace and Elanga has since kept Rashford and Jadon Sancho out of the team. Edinson Cavani may soon be added to the list.

What separates Elanga from his peers is his resilience since a significant injury wrote off four months of his career aged 17. It denied Elanga appearances at Old Trafford in the fourth and fifth rounds of the FA Youth Cup and by the time he had recovered, the Covid-19 pandemic had spread across the continent.

At Wolves in May, I have spurned two chances before scoring at the third attempt. One teammate at United has been dismissive of Elanga’s prominence under Rangnick and he got stage fright in the penalty shootout with Middlesbrough only three weeks ago. Racist trolls polluted his Instagram feed and on Sunday Elanga was pelted with a missile by a Leeds fan. Goals at the Elland Road bear pit and the Wanda Metropolitano are proof of his mettle from him. 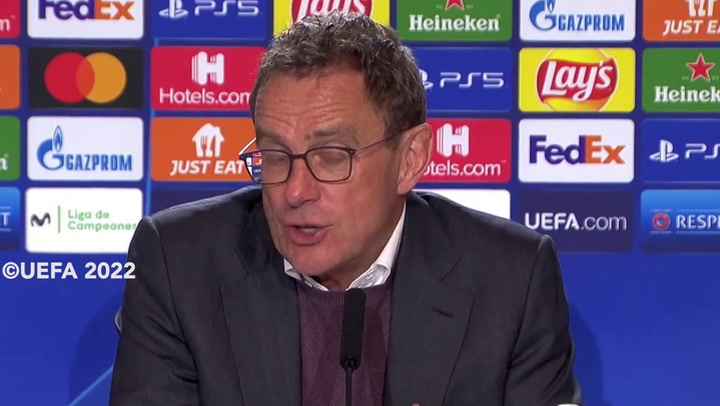 It was only 18 months ago there was dread among the United Under-23s staff at the prospect of another relegation. The quality was lacking in the more senior bracket of the age group and they had one available forward – Elanga. He emerged for the second-half of a 5-0 friendly thrashing at Doncaster on a day Mejbri snapped at Harvey Neville.

Elanga’s eye-catching cameo in the first-team friendly at Villa Park the next week was a bonus and he was brought back down to earth at Rochdale’s Spotland stadium in the EFL Trophy at the end of the month. That grounding was also a test and Elanga passed it by showing he had outgrown second-string football. Just like Rashford did.