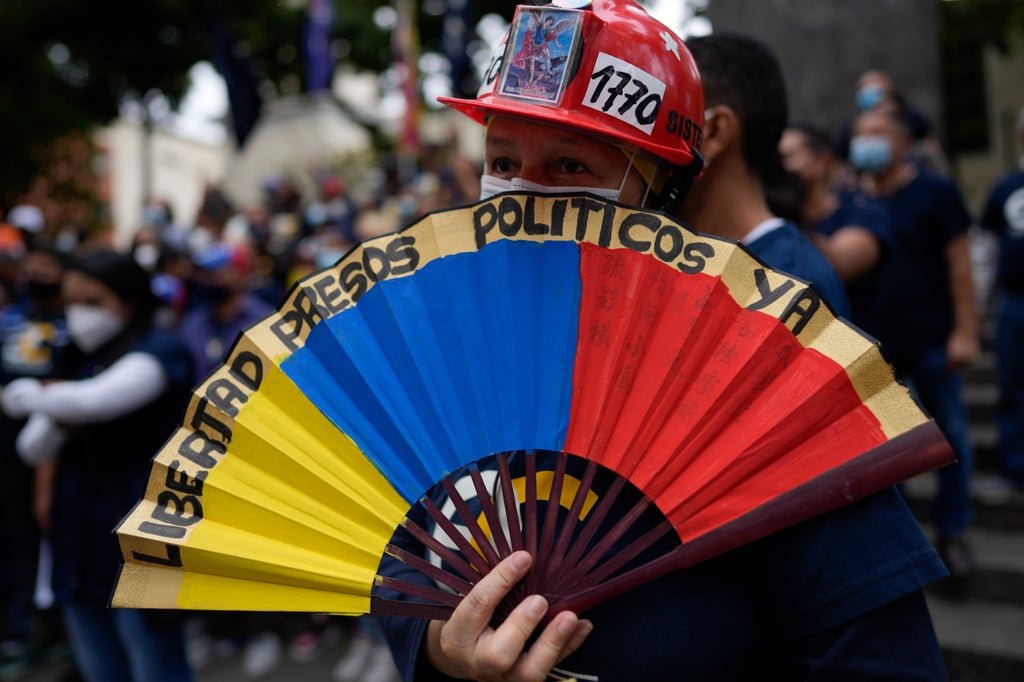 Venezuelan opposition parties on Saturday staged one of their largest rallies since the coronavirus pandemic erupted, hearing calls for unity to end more than two decades of socialist governments — though they were outnumbered by a pro-government demonstration elsewhere in the capital.

Juan Guaidó, the former congressman who three years ago proclaimed himself Venezuela’s legitimate leader, urged the hundreds who gathered in Caracas the capital, to unify and push for an early presidential election ahead of the currently scheduled vote in 2024.

He urged opposition activists to embrace a “key pillar … that has given us the victory in the past: unity.”

Guaidó’s speech followed a brief march by members of several opposition parties, some of whom had come from distant cities.

Activists waved party flags and some held a banner with the names of people who were killed during protests over the last decade.

While it may have been one of the largest meetings of its kind in two years, it was smaller than a government-organized Youth Day rally elsewhere in the city — and far smaller than the demonstrations that rallied behind Guaido in early 2019 when, as head of the opposition-controlled congress, he said Maduro’s reelection had been illegitimate and declared himself acting president.

His parallel government was recognized by dozens of countries, including the United States

But the enthusiasm and support he saw three years ago has waned both abroad and at home, in part because the pandemic kept people from organizing and protesting and also because of a sense that efforts to end Chavismo — the movement established by the late President Hugo Chavez —remain elusive.

The government has also shut down or taken over most independent or opposition news media and has banned, jailed or coopted several major opposition leaders and parties. That has created barriers for the opposition to reach voters who are not actively involved in politics.

Now, the opposition has been reenergized after shocking the ruling party by winning the governorship in the northwestern state of Barinas, where the Chavez family had governed for more than two decades.

January’s win came even after the country’s highest court retroactively disqualified the opposition candidate as he was ahead in the vote count in November, forcing a do-over, and then banned several substitute candidates.

Many, including Guaidó, attributed that victory to the bloc’s ability to unite behind a single candidate after it had lost a series of races in which opposition parties divided.

“That is the difference. I consider it the tip of the spear in what we have to face this year and those to come,” said Norma Bastardo, a school principal and regional leader in the conservative COPEI party. “It set the tone.”

Bastardo, who traveled from the northeast state of Anzoategui, said she would like to see primary elections to choose an opposition candidate.

Venezuela has been going through a deep political, social and economic crisis for years, which critics attribute both to a drop in oil prices last decade and to rampant mismanagement by socialist governments. The government largely blames US economic sanctions.

Millions of people have fallen into poverty as the minimum wages have fallen to about $2, pushing many to migrate. The United Nations has estimated that more than 6 million Venezuelans have left the country in recent years, more than 10% of the population.

Guaidó on Saturday repeated calls for negotiations with the government to establish free and fair elections and guarantees that the outcomes will be respected. The government walked away from the most recent talks in October after a Maduro ally was extradited from Cape Verde to the United States on money-laundering charges.