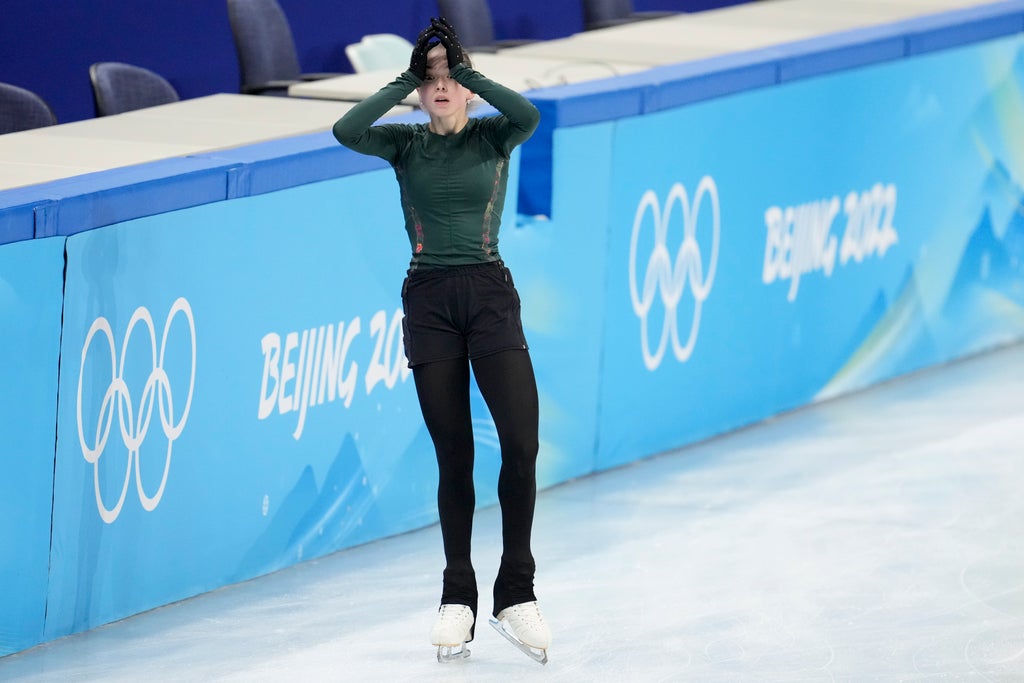 The 15-year-old figure skating star at the center of Russia’s latest doping scandal, now stretching toward its second week and some form of resolution, seems to be the only person in the world without a word to say about it.

Instead, Kamila Valieva continues to gamely practice at the Beijing Olympics amid a sea of ​​media and camera crews as the Court of Arbitration for Sport decides whether she is even allowed to compete this week. An expedited hearing was scheduled for Sunday night, with a ruling expected sometime Monday.

Valieva has yet to miss a scheduled practice since a drug test taken in December was flagged last Monday for traces of a banned heart medication. That was the same day the reigning European champion helped the Russian skaters win team gold with a dynamic free skate in which she became the first woman to land a quad in Olympic competition.

It hasn’t always been easy to plug along as the world implodes around her, though. On several occasions, the stress appeared to have gotten to Valieva, including a moment during Saturday’s practice session when she fell during a triple axel and eventually skated to the boards and tearfully hugged her embattled coach, Eteri Tutberidze.

“She’s a strong girl,” offered Russian ice dancer Victoria Sinitsina, who along with her partner, Nikita Katsalapov, have tried to provide Valieva some much-needed support as three men in a Beijing hotel decide the fate of her Olympic dreams.

“I told her to calm down,” Sinitsina said, “even if it’s a hard situation right now.”

One way or another, Valieva will know soon whether she will be allowed to compete in the women’s short program on Tuesday. A decision by CAS is expected roughly 24 hours before the overwhelming favorite to win the gold medal is due on the ice at Capital Indoor Stadium.

“Victoria had a few minutes to share some words with her, and Kamila is a strong girl so she is going to be fine,” Katsalapov said. “(Victoria) asked her to, like, calm down just a little bit, even if it’s a hard situation around her.”

Valieva has yet to speak to the media since the news conference following the Russians’ team gold, when the seemingly unbeatable star looked every bit the precocious teenager. In between questions, she was snapping photos and texting with friends on her pink-cased cellphone, while squeezing tightly the plush Bing Dwen Dwen mascot given to each of the medalists.

Her joy was unmistakable: “We all did such a good job,” she gushed. “I’m very proud of my team.”

Now, all of their gold medals hang in the balance, unlikely to be decided until long after the Olympics have ended.

The closed-loop system of the Olympic bubble, put in place to minimize the spread of COVID-19, has had the unintended consequence of giving Valieva some peace away from the rink. There are no people staking out the Olympic Village, trying to get even the shortest sound bite, providing her a bit of sanctuary from the nonstop news cycle.

Most critics taking to social media have largely supported Valieva, too, leveling their ire instead at Russian coaches and administrators responsible for her well-being. That includes Tutberidze, who also coaches her teammates Alexandra Trusova and Anna Shcherbakova, and who has earned a reputation for using up and discarding her young athletes.

“Let’s be kind to the 15-year-old who produced a positive drug test because she lives in an institutionalized system where she was most likely guided and trusted the adults around her,” tweeted Mirai Nagasu, a member of the US figure skating team four years ago at the Pyeongchang Games.

Ashley Wagner, another American figure skater who competed at the 2014 Sochi Games, was appalled that Russia is at the center of another doping scandal, yet seems to continually get a pass from the International Olympic Committee.

Wagner also took aim at a skating culture that often champions teenagers with little regard for their long-term health.

“Yes, a 15-year-old can be mature, and have a life that is already full of incredible experiences, but still, she is a kid,” Wagner said. “She’s not the first kid put in this position and she won ‘t be the last unless we start taking this seriously.”

At the center of the firestorm is Valieva, a high schooler with fuzzy pink skate guards and a beloved Pomeranian puppy back home. She did a perfect run-through of her record-setting short program during Sunday’s practice. Then, while dozens of cameras clicked for pictures, she reached down and touched the ice before walking off.

The wait is on to see whether Valieva will be allowed back on.

“It’s always bad when something like that happens, so we’re very sorry for any athlete,” Russian ice dancer Gleb Smolkin said. “I think like everyone else, we are just waiting for the results of this story. We wish Kamila all the best. She’s a great athlete, she’s a great skater. She has a bright future.”