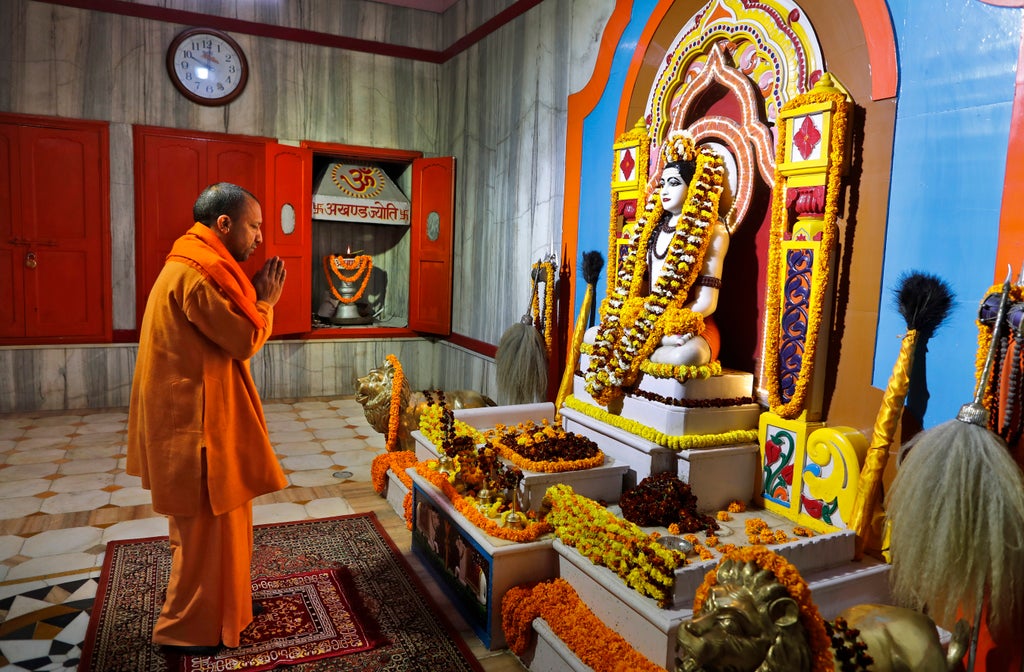 Under gray skies, construction cranes towered over laborers building a mega three-story temple demanded by millions of Hindus for over 100 years. The shrine is dedicated to their most revered god, Ram, and is being built on a plot of land where a 16th-century mosque stood, before a Hindu mob tore it down in 1992.

This was the first sign of progress Manish Yadav, a 25-year-old student, had seen in this once-sleepy city.

Modi’s BJP has won emphatically twice on the national stage. But the state polls in Uttar Pradesh – India’s most populous with over 230 million people – are crucial, a barometer of the party’s popularity ahead of general elections in 2024. Over 150 million people will vote in the state across seven phases starting Thursday before results are declared in March. Four other states will also vote in February and March — the BJP is fighting to retain power in all but one.

“We need Ayodhya to be a success. We need companies to come and invest, we need factories, technical colleges, institutes and jobs here so people don’t leave,” said Yadav. He said he voted for the BJP in 2019 because it promised to build the temple, and “now we need more.”

Uttar Pradesh is currently governed by the BJP’s Yogi Adityanath a polarizing Hindu monk turned politician. Yadav said the government has failed to provide him – and millions like him – jobs. Still, I will vote for them again.

The BJP’s answer appears to be infrastructure, including mammoth expressways and airports to boost connectivity and tourism. But analysts are doubtful whether huge public spending on such projects is enough to kickstart growth in Uttar Pradesh, a largely poor and agrarian state where joblessness is rising.

The BJP, however, has made great promises. It says it will attract investment, provide free electricity for farmers and generate jobs for 20 million people, but has provided few details.

It is also wooing voters with welfare measures, doubling free rations for the poor and a tough stance on crime.

But the party’s core Hindu nationalist agenda is unmissable. In December, Modi took a dip in the Ganges River before thousands after he inaugurated a $45 million corridor that connects two iconic religious sites in the state. Such events, analysts say, have turned temple inaugurations into political spectacles that drive focus away from pressing issues.

“There is a limit to how much employment and development you can create around a temple,” Mehrohtra said.

The big-ticket projects, which deftly mix religion and infrastructure, are aimed at pleasing the BJP’s Hindu base amid reports of discontent among key voters. The party won in the state last time by consolidating Hindu votes across castes. But multiple defections to the opposition Samajwadi Party, whose secular appeal has swayed voters from a wide range of castes as well as the Muslim community, have raised uncertainties.

Farmers, an influential voting bloc, are still furious at Modi for pushing agriculture laws that triggered a year-long protest before he bowed to the pressure and revoked them in November. The BJP is also facing allegations of COVID-19 mismanagement in the state after a calamitous surge in infections last year saw numerous corpses floating in the Ganges.

The polls are a referendum on the saffron-robed Adityanath, a poster figure for the Hindu right-wing, who some analysts believe is vying to be the next prime minister. In 2017, he was appointed the chief minister — the top state official — after the BJP won.

“It is an electoral test on his brand as a leader because he embodies a more radical form of Hindu nationalism and is overly more communal than others in the BJP,” said Gilles Verniers, a political science professor at Ashoka University.

The head of an influential Hindu temple, Adityanath’s rise has been marked by an increase in violence against Muslims, with numerous reports of lynching and other attacks. Recently, Adityanath declared the forthcoming election as a “80% versus 20%” contest, which roughly match Uttar Pradesh’s Hindu and Muslim demographics. He later clarified the figures in an interview with local media as a majority that want development and safety over a minority that opposed it.

“The BJP has built houses and toilets for the poor without differentiating between their caste and religion. No one can claim the benefits of government schemes have reached only Hindus and not Muslims,” said Vijay Bahadur Pathak, the BJP state vice president.

But the meaning wasn’t lost on Mohammed Noor, an auto-rickshaw driver in Lucknow, the state capital. “Until the Yogi government came, nobody pointed out a Hindu from a Muslim here. But ever since the BJP has risen, they’ve created a feeling of divide, of difference – this has only grown,” he said.

“The Muslim community have just given up – we have no hope, we have stopped reacting,” said Shabbar Siddique, an 18-year-old in Lucknow.

Even the construction of the temple in Ayodhya has been met with resignation from the city’s Muslims.

“What can we say? Since the judgment has come from the highest court, we’ll have to abide by it,” said Syed Zia Haider Rizvi, a watch store owner. “As a businessman, I should gain.”

The Supreme Court in 2019 ruled in favor of the temple, ending one of India’s most protracted land disputes, and ordered alternative land to be given for a mosque. Many Hindus, who believe Ram was born at the site, rejoiced at the verdict, while a key Muslim body deplored it.

The mosque’s destruction in 1992 set off riots in which 2,000 people across India were killed, mostly Muslims. There’s aa feeling among many Muslims in Uttar Pradesh of rising fear and uncertainty, although Hindu and Muslim residents in Ayodhya itself say there have been no religious tensions since the mosque unrest.

The BJP spun the court verdict, which came after the 2019 national elections, as their success. Observers said the fervor behind the ruling likely boosted Modi’s electoral sweep.

But now analysts believe the party has squeezed all it can from the temple.

“They certainly take the cake for keeping Hindu passions alive in the name of the temple for decades and decades,” said Lucknow-based political analyst Sharat Pradhan. “But electorally, I think it has outlived its potential.”

BJP leaders are already invoking another holy city in Uttar Pradesh. In December, Adityanath first mentioned Mathura, believed to be the birthplace of Krishna, a major Hindu deity. A recent court case filed by Hindu priests over a 17th-century mosque there could rekindle tensions.

Mathura, like Ayodhya, will also get a temple – work for it was already “in progress,” Adityanath was quoted as saying by local media.

“Now that they have won Ayodhya, they will need another battle – which site are they going to fix their eyes on next?” said Verniers, the political science professor. “The moment they inaugurate the Ram temple, they will have to find something else.”