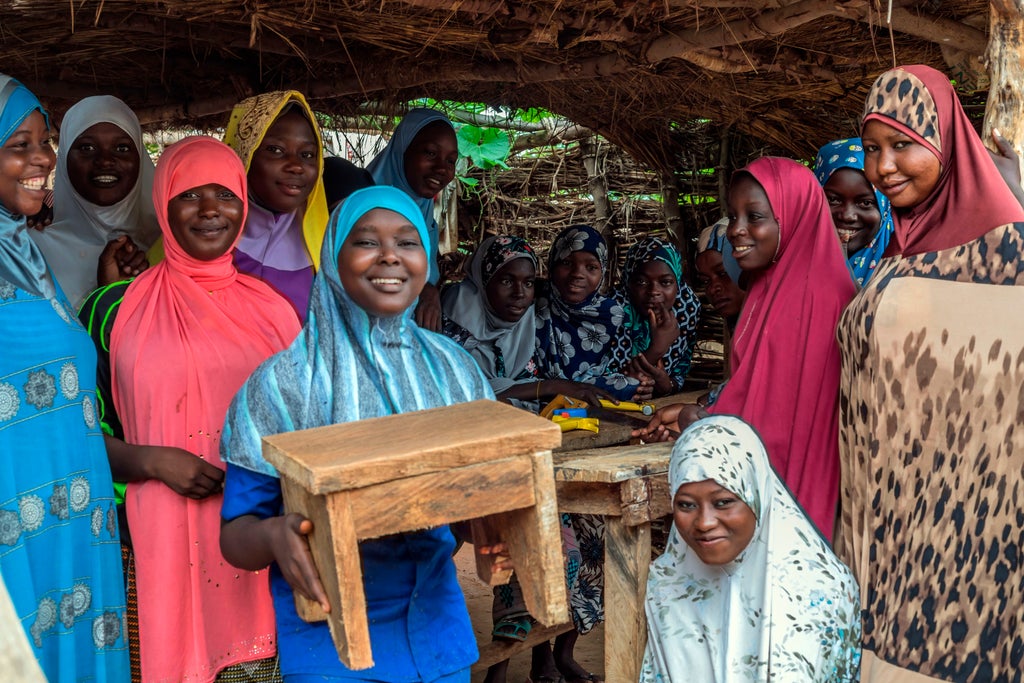 Hope Nankunda is fighting to keep young Ugandan girls in school and away from marriages until after they turn 18.

It’s a calling that began for Nankunda as a teacher, when she found herself spending more time counseling her students than engaging in classroom instruction.

“They share about the challenges in their communities, in their homes, and most of these challenges have a lot to do with sexual abuse, with being forced into marriage in exchange for food, especially in the lockdown,” said Nankunda, the founder and executive director of Raising Teenagers Uganda as well as a coordinator for Girls Not Brides Uganda. “They also have a lot to do with the increased cases of teenage pregnancy.”

Though Nankunda and her nonprofits achieved some goals, including Uganda’s passage of a law prohibiting marriages of anyone under 18, COVID-19 dealt her crusade some setbacks. Experts estimate that during the pandemic, the number of child brides worldwide marrying each year may be doubling the typical annual rate of 12 million.

Nankunda and other advocates have sought more support and have found some from an unexpected source — VOW for Girls, a nonprofit that is backed by elements of the American wedding industry. With 2022 expected to be a record-setting year for weddings — an estimated 2.5 million ceremonies, according to Shane McMurray, CEO of the research company The Wedding Report — those donations could be larger than ever.

VOW for Girls plans to boost its fundraising this week to try to persuade newly engaged couples on Valentine’s Day to plan weddings that include donations to help groups like Raising Teenagers Uganda. It will also ask wedding-aligned brands to pledge donations and other commitments toward stopping child marriage.

“Though we’re only at the beginning of 2022, we’re already seeing record commitments from brands, wedding professionals and engaged couples,” he said. “Couples saying ‘I do’ this year are already helping girls say, ‘I can’ to their dreams.”

The idea for combining those ideas came from Mabel van Oranje, a human rights activist who had been attending a ceremony at which the couple requested charitable donations instead of gifts.

Dunn calls it van Oranje’s “Ah-ha” moment: “What if we could work with engaged couples, brands and wedding professionals to create a moment of philanthropy as people are celebrating love?”

Van Oranje brought the idea to Ford Foundation President Darren Walker, who signed on as co-founder, and then to the social impact agency Hive. The co-founders of Hive said they could see poetry in the idea — using a couple’s happiest day to help prevent a traumatic one for a young girl.

Hive CEO Jenifer Willig said VOW for Girls now has a sustainable flow of revenue given that new couples marry each year, meaning there are potential donations through gift registries, gown purchases, venue rentals and wedding planners and photographers.

“We want to raise money, but we also want to raise awareness of this issue,” said Willig, whose social media campaigns have drawn 143 million impressions and support from “Wonder Woman” star Gal Gadot and Facebook’s Sheryl Sandberg. “People do not know that a girl gets married every three seconds in the world.”

Justin Warshaw, CEO of the bridal gown designer and manufacturer Justin Alexander, said that while his company has always given to charities, his connection to this cause was different.

“I love that VOW for Girls focused on female empowerment as one of their key pillars, but also health, education, and personal safety,” he said.

He added that his grandmother Shirley, who founded the company in 1946, would approve.

“It was like an ode to Shirley, who was a female pioneer and an inspiration to me.”

The Wedding Report’s McMurray said Millennial and Gen Z engaged couples are now more likely to use their weddings to further racial and gender equality, by seeking donations instead of gifts or using their gatherings to raise awareness of causes important to them. Those trends make VOW for Girls hopeful about the future.

“There’s such a natural alignment between people who are celebrating love, and giving girls around the world the opportunity to do that exact same thing,” Dunn said. “Our entire vision is a world in which no child is ever a bride. We’re building this community of people who are committed to making sure that girls everywhere can live lives that they love.”

That’s what Nankunda tries to do with Raising Teenagers Uganda, with financial and technological help from VOW for Girls.

“When we rescue girls and that story is shared on social media and websites,” she said, “we get to inspire so many other young girls out there and give them a message that it’s not over, that you can still make it in life .”

Nankunda says her programs work to provide Ugandan girls safe spaces where they can learn and see potential futures that do not involve marrying as children and quickly becoming pregnant. In some cases, that means giving girls bicycles so that they can better avoid being assaulted on the way to their schools. In other cases, it means giving families goats to provide milk and some income so their daughters can continue their educations instead of going to work to help support the family.

“I choose not to lose hope,” Nankunda said. “I know that it’s a matter of time.”

The Associated Press receives support from the Lilly Endowment for coverage of philanthropy and nonprofits. The AP is solely responsible for all content.