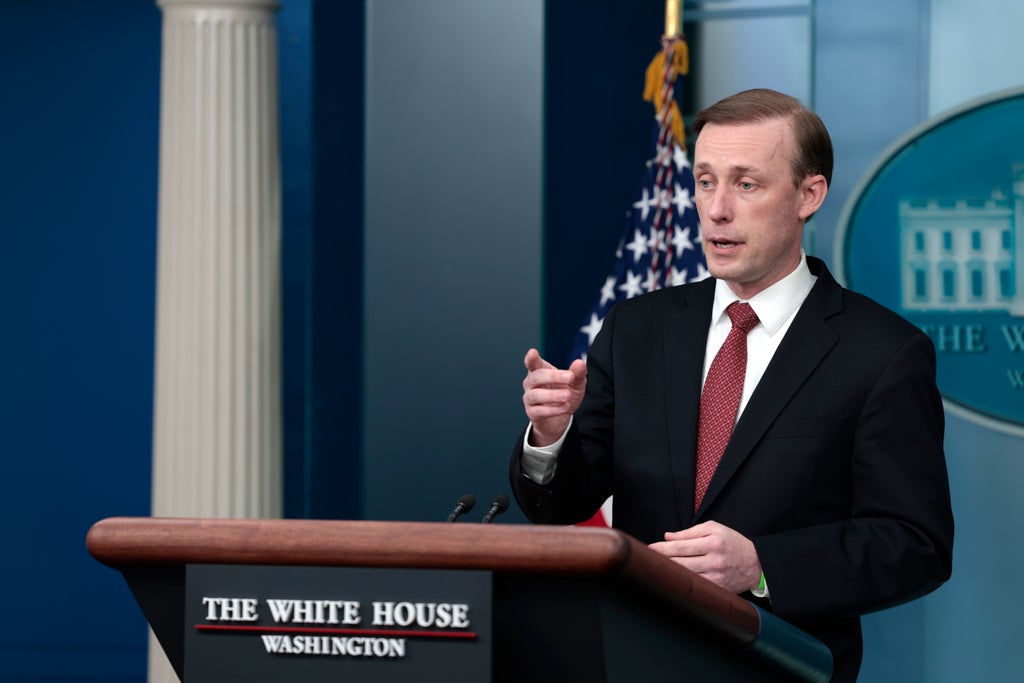 The Biden administration has warned that Russia could invade Ukraine at any time, as it asked US citizens to leave the country within 48 hours.

While the diplomatic efforts are on, US officials are also preparing to evacuate its embassy in Kyiv.

“The risk is now high enough and the threat is now immediate enough,” said Jake Sullivan, White House national security adviser. He added that there was a “credible prospect” of Russia launching an attack before the Beijing Games end on 20 February.

Asserting that it is an “urgent message,” Mr Sullivan told the reporters at the White House “Russia has all the forces it needs to conduct a major military action.”

“It could choose, in a very short order, to commence a major military action against Ukraine,” he said, adding that though they “can’t pinpoint the day” of the attack but it is “a very very distinct possibility.

The warning comes even as Russia has repeatedly denied any plans to invade Ukraine despite a troop build up of more 100,000 near the border.

Moscow, however, dismissed it as “hysteria.”

“The hysteria of the White House is more indicative than ever,” said Russian Foreign Ministry spokeswoman Maria Zakharova. “The Anglo-Saxons need a war. At any cost. Provocations, misinformation and threats are a favorite method of solving their own problems.”

The statement from the US also follows a flurry of diplomatic engagement, including the meeting of French president Emmanuel Macron with Russia’s president Vladimir Putin in Moscow.

Earlier, Britain’s foreign secretary Liz Truss held talks with Russia’s foreign minister Sergey Lavrov as she urged him to pull back Russia’s troops near Ukraine. Lavrov, however, characterized the meeting as a “conversation between deaf and dumb” as he accused her of grandstanding refusing to listen.

“I can’t see any other reason for having 100,000 troops stationed on the border, apart from to threaten Ukraine. And if Russia is serious about diplomacy, they need to remove those troops and desist from the threats,” Ms Truss had said.

The sense of crisis, further escalated with the Pentagon ordering deployment of 3,000 additional troops to Poland, has prompted the UK, Australia, Canada and the Netherlands to caution its citizens against staying back in Ukraine.

The US Army is also shifting 1,000 troops from Germany to Romania, which shares borders with Ukraine.

The Biden administration, however, promised against entering a war in Ukraine. It would be ordering economic sanctions against Moscow, in case of invasion.

US officials told The Associated Press on the condition of anonymity that while a small number of staff would be asked to stay back in Kyiv, almost 200 Americans would be either sent out or relocated to Ukraine’s far west, near the Polish border so the US retains diplomatic presence there.

Meanwhile, Mr Sullivan urged the Americans in the country to leave the country at the earliest, adding that they should not expect the US military to rescue them in the event that air and rail transportation is severed after the invasion.

In Ukraine, the government has also stepped up their preparation with president Volodymyr Zelensky urging officials to step the efforts to bring nearly 2 million civilians in the territorial defense force under military command.

Meanwhile, the country’s commander-in-chief Valeriy Zaluzhny assured that its forces “can restrain the enemy and prevent them from thinking about setting foot on our land”.

Additional reporting from the wires